If you told Marc Maron in the late ’80s that one day he'd interview not just some of the most celebrated comedians, actors, and musicians of his time, but the President of the United States, he'd have told you to fuck off. Around that point in his life, he was an aspiring stand-up comedian paying his dues at the legendary Comedy Store on the Sunset Strip and, well, pretty deeeeeep into drugs. Soon after, the city chewed him up and spit him out. Nearly thirty years later, he hosts WTF—one of the most popular podcasts ever—out of his LA garage, and more recently, stars in Netflix’s new series GLOW, a look at LA’s ragtag female wrestling circuit in the late ’80s. (It’s great. Watch it.) He’s been to hell and back; we talked with him about how LA played a role in all of it and how the bad old days taught him about his latest role. 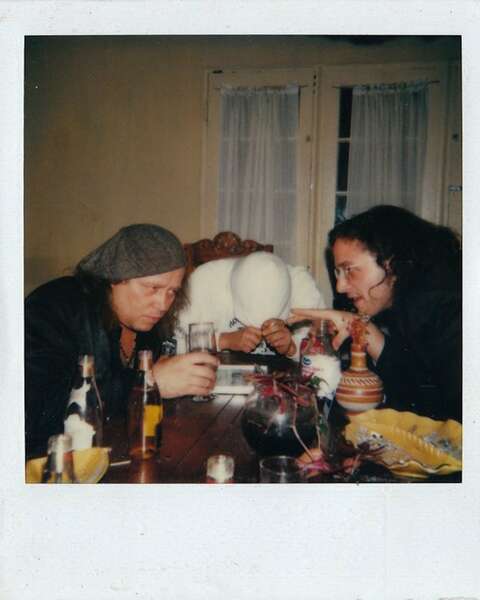 THE STANDARD: What drew you out to LA originally?
MARC MARON: In the summer of ’86, right after my last year of college, I moved out to LA to pursue comedy and to hook back up with my writing partner from college to maybe write a screenplay. Somewhere during that time, I auditioned at The Comedy Store and I got a job as a PA on a production that Mitzi Shore was doing. And because I had auditioned at The Comedy Store, Mitzi remembered me and gave me a job as a doorman. Being a doorman at The Store was a sort of rite of passage. It meant that you were there, and that you could find your way on stage. Then I moved into the house that she leased out to gypsies and comics behind The Comedy Store. I just started living at The Comedy Store until I fuckin' hit the wall—it didn’t take me long, maybe a year. I sort of was an appendage of The Comedy Store for a good nine months.

Did you see The Store as your connection to the kind of mythology of being a standup?
Well, yeah. I had a little bit of a romanticized notion about drugs and truth and art. I was a pretty impressionable and whacked-out dude with not too many adult tools to function in life. The Comedy Store and its methodology had intensity to it. At that time, you entered a structure that was like dark comedy college, where Mitzi was the queen and everybody sort of operated in a certain amount of fear of her and need to impress her.

At that time, it was the second wave of The Comedy Store—the end of that ’80s boom. I was there right as Dice [Andrew Dice Clay] and Sam Kinison became huge stars. Those were the last two of that original crew who were delivered from that place in the early ’80s, and they had a lot of influence on the tone.

I got wrapped up with Sam, and he had a lot of influence over me. I was sort of impressionable and fucked up on drugs and living in the house that Mitzi owned, so I became very enmeshed in his world and the world that kind of revolved around him at The Store at that time. Marc Maron and Sam Kinison circa 1988 at the Comedy Store. Photo via Marc Maron's Facebook.

It sounds like your first brush with LA, which centered around The Store, really left a lasting impression on you.
By the time I left, I was fairly well out of my mind and had a big fallout with Sam. I was moving towards cocaine psychosis. It took a long time to shake the power of that place, because you enter this kind of dark mythology that’s always been part of The Store. Sam, being somewhat of a Satanic warlock, was really capitalizing on any darkness. I'm lucky I lived through it, really.

After that first stint in LA, you ultimately ended up in New York…
I hit the wall in like ’87, ’88, and I went back to Albuquerque and cleaned up. Then I went back to Boston where I had gone to college and that’s really where I started doing comedy. The boom was over, but Boston had a regional comedy scene, so I started working. I moved to New York in ’89 to try to make it in a legitimate comedy scene, to get some TV attention and stuff. And then in ’92, I was fucked up again and I left New York. I went to San Francisco for a couple years. I was chasing the dream, you know? I was desperately trying to work as a comic.

If it wasn’t for the weird happening of Air America, I would’ve been tapped. I took that gig on a whim. I was broke. I had just bought a house in LA on some deal money and I took that job, which ultimately, in a circuitous way, led to the podcast. But by the time I started the podcast, I was bled out by a fuckin' divorce, I couldn’t sell tickets on the road, I was up against it. It was almost closing time. It all turned around in this garage somehow without a plan. It seems like there are two myths of LA. One is that you come here to make it big, and the other is that you come here and it ruins you. It seems like you’ve lived both of those stories somehow.
I was definitely spit out by Hollywood in a fairly classic way. But there’s some part of me where the one thing I managed not to do was to be fundamentally deluded about show business. I was dumb enough to think that I was on the right path and that there was no changing it. I was very stubborn. I didn’t really know how to be palatable in a mainstream way, and I was really just servicing my own creativity on stage and trying to figure out stand-up on my own.

I think there are a lot of people now where the idea of making it in Hollywood is very different, because everybody can make it in their living rooms and put things out into the world that justify at least the part of their ego that they’re creating something. That said, it seems that there’s still a lot of stuff that people don’t quite understand. There’s definitely a structure. It’s very hard to get any traction without representation. You have to kiss ass and play nice and understand who your group is.

GLOW very much centers around this idea of making it in Hollywood. Was that part of your attraction to the material?
That’s a very realistic thing for that period, and I think that that character still exists. People who want to do that need to be that character. But you’re out here with everybody. It’s a highly competitive, bizarre place. There are a lot more weird little jobs you can get in show business now.

My appeal to the show was I had just finished shooting four seasons of my show. One of the things I had not really done is just a straight acting job. I'm no genius actor, but I know that if it’s somewhere within my wheelhouse, I can handle it. When I got that script, I was like, “I know this guy, and this is an interesting part, and an interesting world.” So, it was more my attraction to the character, who I related to, more than anything else really. 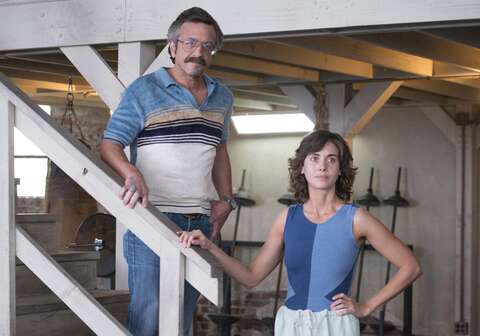 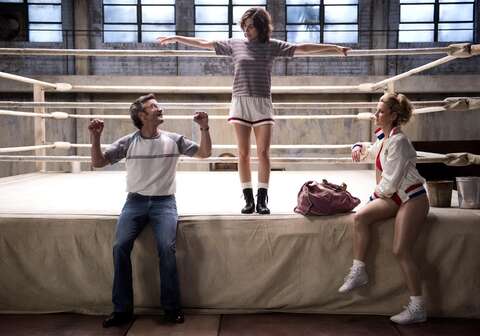 How familiar were you with the world of professional wresting?
Over the years, I’ve interviewed many wrestlers to understand the appeal. I respect the guys in it as the creators of a spectacle and a very specific type of arduous entertainment.

I was told at the beginning that my character is coming into it as a film director who takes this gig for a reason and doesn’t know anything about wrestling. So, I just honored the character. I didn’t put any of that other shit in my head. This guy is sort of blindly cocky and believes that it’s only a matter of time before he lands on top. He’s not a neurotic guy. He’s not that reflective. The role was about shutting some things off in myself and embracing some of the more self-involved parts of my personality.

I knew I wanted to wear aviator glasses, I needed a flip-top box of cigarettes, and I knew how I wanted to do cocaine. I said, “Look, this guy, he does coke out of a bindle, usually cut from a magazine. He’s a user. He’s not a sharer. It’s part of his life, his medicine, so he does it out of a bindle, which he keeps in his cigarette box, and he uses a key or a pen top.”

It sounds like the character that you play is a character that you’ve encountered in life.
LA is full of that guy—guys with an angle. My character is not quite a hustler because he believes that he’s an artist and his heroes are artists. He doesn’t see himself as a guy who’s just trying to make a buck. The cockiness that he has is necessary on some level to survive in this business, because you have to nurture a delusion in order to stay in it. If you don't have a fairly healthy delusional sense of your talent and your ability to be successful in this business, you’re never going to withstand it. The sad thing is that delusion is kind of necessary to survive and make it in show business, but if it’s not working out, you might not be able to dismantle it.

Your return to LA and the subsequent success you’ve had with the podcast has coincided with a shift in LA.
A lot has changed. A lot changed in comedy with the infusion of new energy, younger people, and sketch and improv. There seems to be a fairly large population of less-damaged people gravitating towards this city. And certainly, technology and moving away from traditional outlets has created a lot of opportunity and a lot of different options—some good, some bad. You might argue that there’s too much choice, but it’s no longer necessary for most people to land a huge movie or TV show to find their audience. There’s a lot more opportunity in a lot of ways, which I think might limit the desperation. But bottom feeders in Hollywood are always going to be there. Three Sheets to the Wind with LCD Soundsystem's Nancy Whang 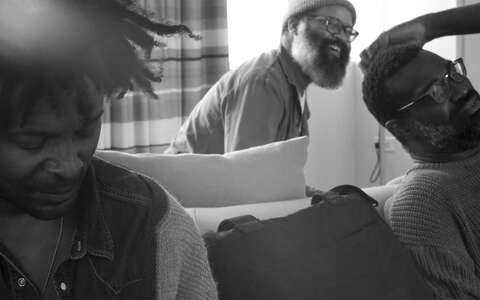 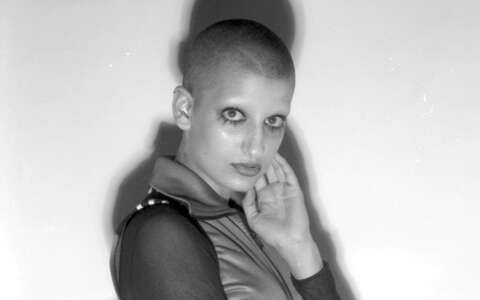