Considered to be the mother of yarn bombing, Magda Sayeg transforms urban landscapes into her own playground by decorating everyday objects with colorful knitted and crocheted works. Her work has evolved from a single knitted stop-sign pole to large-scale installations around the world. She has also been featured at festivals and museums such as South By Southwest and La Museo des Esposizione in Rome. Back in the day, one of her first commissioned pieces was created for The Box at The Standard, Hollywood. And now, many years later, she's reinstalled the piece titled Aquarama exactly as it was way back when. We met up with the Williamsburg-based artist to discuss the beginning of her medium, her new projects and working with the iconic Rei Kawakubo of Comme des Garcons... Tell me about your piece at The Standard, Hollywood?

It’s crocheted seaweed. So, it’s strips of crocheted material that resembles seaweed. And the idea is that it hangs from the ceiling of the vitrine and then I put a fan on each end and so when you turn the fans on, it sways; the idea is that it will look like an aquarium and then whoever would sit in it would almost look like a mermaid. It’s funny to talk about it now because, as you know, it was 16 years ago now!?

Yeah, I mean it really brings something special to the lobby; tranquility.

Yeah. And I’m proud of it because there’s a lot of them I don’t like that I did back then. I’m like, “oh, my God, that was the worst. I can’t even believe I thought that was cool.” Or I hate that interview. I didn’t know how to talk about what my passions were or what influenced me.

Okay, so I watched your TED talk, which I really loved by the way, and I have a lot of questions about the things you were talking about. First off, did your art really start from boredom?

Yeah, it’s true. Because I was not even in the profession of art in my head. You know, I had a clothing shop and I was making things, but in my head, I wasn’t really thinking I was an artist. So, it’s just such a wild moment for me that something so simple just changed the course of my life. It was simply out of boredom. It was selfish. It was unambitious. It was just entertainment for my own little head.

Was it like boredom in general or boredom at seeing drab things?

It was boredom and seeing drab things. It was definitely an instant-satisfaction moment. I wasn’t thinking ‘oh, maybe one day I’ll do a double decker bus in London.’

“We hired you because of your work. Why are you trying to do something different from your work?” - Rei Kawakubo to Magda Sayeg

And did you knit that piece yourself?

Yeah, I did. I didn’t think that I was very good at it, but yeah, I did that one. I mean, that’s the reason why I stumbled with that. I didn’t think I knew how to knit well. I was like, “well this is time-consuming” and I didn’t really have any real excitement to learn how to make a baby blanket or a sweater.

Was it something you were already playing around with when you did it or was it just like a spur of the moment thing?

At that very moment it felt like there was this sort of renaissance of crafts. You heard the word DIY a lot more. Martha Stewart was a big deal. She influenced people to kind of go back to simple crafts and hobbies. She showed you the beauty of folding a napkin a certain way. So, I think that there was already this movement in the air, if you will, of learning things that don’t really have to do with our current time. But the idea of putting knitting on a pole or any of those, that was unheard of.

Obstructing public space is usually done with graffiti, but yarn bombing is so different in not only the look but also what it represents?!

Everyone wanted to be a graffiti artist. Everyone wanted to do street art. You kind of couldn’t figure out which ones–you know, it started sort of homogenizing and I think when I examine why what I did it resonated so much, I think it was because it was different. It wasn’t a spray can. It was completely different from what people were seeing in the urban landscape.

So, you are credited as being the original yarn bomber. Who coined that term?

It was the BBC, probably, a year and a half or two years after I started it. His name is Owen Bennett-Jones and the reason why I’m telling you this is that this man is iconic as far as radio journalism is concerned. My father listened to Owen Bennett-Jones on World News on the BBC every morning on the way to school. So, to me that was such a crazy moment that this man’s voice that I would hear every morning when I would go to school is asking me: “I hear you’re the mother of yarn bombing. Is that true?” Wow, this is a bit much for me. Too much stimulation. 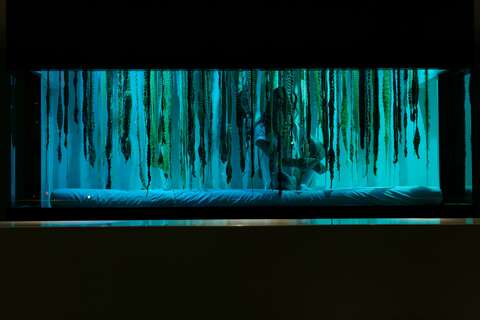 Some time after you started exploring this new medium, other people started doing it as well. How did that make you feel?

Well, I’ll admit at first, it’s a little bit like, “no, that’s my thing.” You know? But how can I say that when I see that there are people in parts of the world that I never, ever thought that I would have some effect on. Like China, Japan, India, Canada. Madagascar. It just became so crazy to me that it was no longer like, “you’re copying me.” It was more like, “oh, my God.” It made me feel like I wrapped my arms around the world because I never thought that I could communicate at any level with someone from another country, another language, another culture.

I want to get more into the pieces: they’re very colorful, there’s lots of patterns. Where do you find inspiration for your patterns from? Is this something that just happens organically or do you actually research and that’s how they come about?

Inspiration comes from everything from a drawing that my daughter did or the lipstick that I see on an old woman walking across the street or maybe a movie I’m watching where there’s this beautiful vintage color or pattern. I love doing things that people don’t expect to see through weaving. We can put this medium in an environment that you don’t believe it would coexist harmoniously. When you talk about patterns, if you look at my website those other works that I do, it’s not just the knitted insulation. Even the spirographs that I make are rooted in mathematics and geometry. So, when I play around with these ideas of something that’s based in mathematics, something you think of that’s rigid and it turns into something that feels organic and of nature, round and circular and soulful. You just don’t think that could be the result. But that, to me, is the game I play in my head.

Is math something you have always loved?

Well I was a math major so I guess I’m going to have to say yes.

I find the synergy between art and science so interesting because something like math is so logical but then art is very imaginative and abstract: the two together is fascinating.

Yeah, I find that too and when people would also say oh, you work with your left brain and you work with your right. I always felt frustrated because I knew that I was good at math but I liked being creative. And to me as a young child, a young person, I thought you could only have one or the other, which is not true. You can use both sides of your brain. You don’t have to be either mathematical or creative.

Are there any color combinations that are your favorites?

The other day, I was laughing because I was describing it to my team helping me with an installation, and I was like, “we use happy colors with sad colors and then we trade happy colors again with sad colors.” I always try to use a bright color with an ugly color or a beautiful color with an ugly color or a bright color with a dark color or a popular color right next to a very unpopular color. It sounds so silly; I should probably be able to articulate it more, but there’s something about alternating cool with hot and I do that with size, too.If you look at some of the patterns you can see that it’s more mathematical than you’d think. Even the way that they fit. If I make a piece that’s 12 inches then I also make pieces that are four inches and three inches because three four-inch pieces could fit next to a 12-inch piece.

So, then I just go and it’s almost like a painter with their palette. 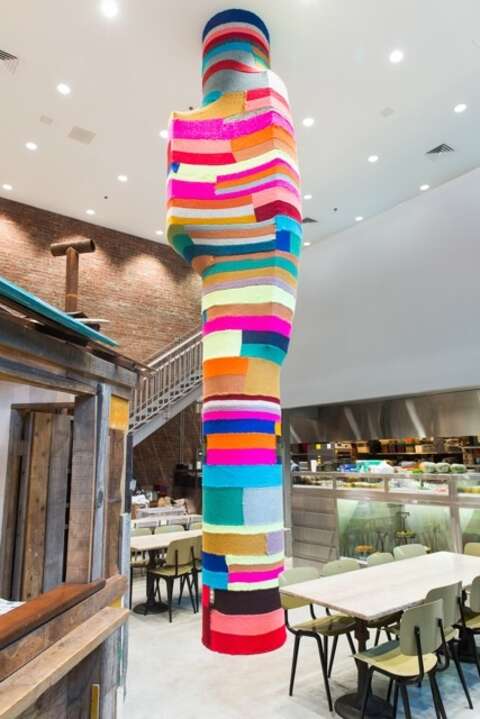 It’s interesting how you bring spontaneity in your work because knitting isn’t usually associated with spontaneity; it’s super time-consuming and takes a lot of work and planning.

The irony of it is that this is for a fashion designer. I think I can tell you. It’s for Comme des Garçons. She’s iconic, Rei Kawakubo; you don’t want to disappoint this woman. So, for me to come in sort of lackadaisical or sort of hippy bohemian, it’s honestly counterproductive in a way but I’ve worked with her before and it was sort of the same chaotic method but it was a success. So that’s why I’m going to do it exactly how I did it before because that magic happened then and I want that magic to happen again.

You did the column at Dover Street Market here in New York, right?

I love that column. It’s amazing.

She’s incredible and I learned a lot and I’m not afraid to tell you that my work is better because of that experience with her. That whole experience was four years of art school for me. That’s the only way I can really truly describe it because of course it didn’t go seamless. There were things that, at first, I didn’t know I was supposed to cover these certain corners properly and there was a little bit of back and forth like, “no, this isn’t exactly it.” This is what I’ll tell you and why I love working with people like her: they hired me because they liked my work but when I found out that she hired me, I wanted to be more than my work. I wanted to do things outrageously. I wanted to just try harder. And at one point they were like, “we hired you because of your work. Why are you trying to do something different from your work,” and I just wanted to sit there and cry because it was so true. I was like, “you’re right, I don’t know why I’m trying to do something different. I guess I’m just trying to impress you and it’s not working.”