We catch up with NY techno artist Umfang before she plays Le Bain alongside Olive T on Friday, April 13th.
LE BAIN: It’s super snowy in NYC right now. Are you in town? Do the weather and nature inspire you in any way when producing music?
UMFANG: I'm currently on tour in Europe, which is also snowy. I definitely think about seclusion in my music production—the woods, places to be alone. I prefer sunny days but I like the work mode I get into when I don't feel pressure to go outside.
You’re a New Yorker who was raised in Kansas. Being raised in Kansas obviously had an influence on you, but how would you describe that influence, besides your first warehouse parties there?
I find Kansas pretty depressing. It made me realize that I have a need to constantly make things. I spent a lot of time alone in my room making jewelry, drawing, making friendship bracelets... I didn't realize how to harness that energy with music until much later. It seemed too emotional. There is a certain melancholy and boredom there that makes people create a lot of interesting music. 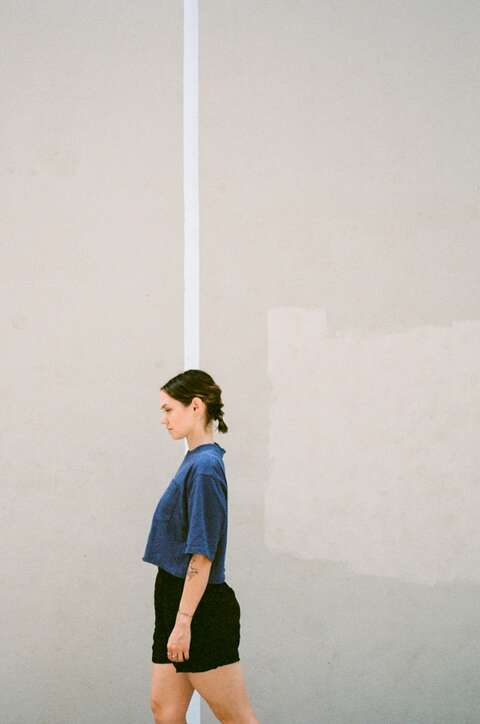 "I try to explore catharsis." – Umfang

Regarding producing music, you've said, “My process is really about sitting down and seeing what happens. It becomes a time capsule of whatever works from that time period.” Do you enjoy getting back to those time capsules, listening back to your previous records?
It's interesting to see where I was at a given point, where maybe I had more patience for a process I have since discarded. It feels more like a journal to me, though, where it seems important to write it out at the time, but I don't have too much interest in re-reading it once it's on the page. I learn from each release. I mostly feel critical of how cohesive the release is in a physical format. I often regret my album art and wish I had spent more time on it.

What importance do you give to your catalog?
I would prefer my catalog to look more consistent, but I have different aesthetic opinions usually by the time the next project comes out. I like things to change all the time. You once said you want to encourage people "to think about things and not become numb and comfortable.” How do you strike the balance between "pleasing the crowd" and disturbing them?
People find all kinds of different things pleasing/disturbing. I try to explore catharsis, which ideally is both. To experience any kind of release, there is usually a lot of tension in the realizations that come before a change. The intensity of amplified repetitive music can be very emotional in a pleasing way, but ideally it reaches more emotions than that to really make you come out of the experience feeling inspired.

Pitchfork wrote that your work is reminiscent of Robert Hood, and you said yourself that your latest album has been inspired by Akira Kurosawa’s movie Rashomon. If you had to switch those two men with two women to describe your art, who would they be?
Great question. I'm pretty torn up about idolizing so many men and playing music made mostly by men in the '90s. I wish I knew more woman artists working at that time. As far as my approach to production, I'll say Punisher from Detroit (not Jeff Mills' alias but Michelle Herrmann who's also from Detroit). She uses a lot of clean hard-hitting drums with subtle, small sounds and melodies in a way that really makes me smile as if I understand. I need a thorough schooling in women in film, but as close as I can get for now is Agnes Martin, the visual artist, for her use of minimal repeated patterns.