NYC nightlife favorite Occupy The Disco (OXD) chats with DC-based DJ collective The NeedlExchange (TNX) before they share Le Bain's decks on Friday, October 14th.
OXD: We formed Occupy the Disco in 2011 because we felt at that time New York so desperately needed more queer events that featured great disco, house, and techno music. So much has changed since then and it's been exciting to see a shift in gay nightlife. In a lot of ways, it feels like TNX helped fill a similar void in the Mid-Atlantic...
TOMMY: Definitely. We’re certainly not the only queer DJs playing underground music in DC, but as our party has grown over the years, I think TNX has given other queer DJs the confidence to know they can be themselves, too, especially in the gay bars here. People are taking more chances and that’s a great thing! 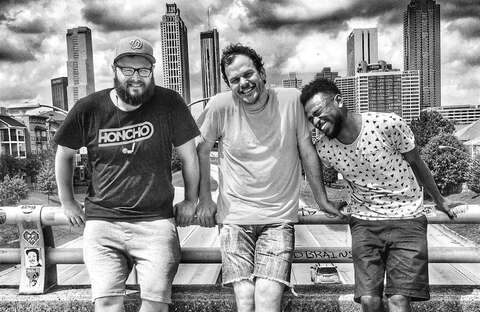 The NeedlExchange, aka Tommy Cornelis, Bil Todd, and Baronhawk
OXD: Dancing has always been political for gay people, and even more so after the shootings at Pulse in Orlando. What's it like playing in a city that's so locked into politics and government?
BIL: The dance floor has been a haven for so many humans to process a myriad of emotions, including political ache, frustrations, and heartbreak. At the moment, I think it's easy to feel wrapped up in discontent for our current political backdrop—and not only for us living in the nation's capital, but also for anyone who's clued in or paying the slightest bit of attention to what's going on. From Orlando to Baltimore to Waller County to Standing Rock, there's no shortage of ugliness to pull from. With that being said, there's a lot of good happening in DC that isn't making headlines. A lot of people are doing incredible things for our country, for our planet, for the future, on a daily basis. It's okay to be aware of both the good and the bad...there's an achievable balance.

"I can take moments in any of my sets and play some tracks that take a stance on injustice." —Baronhawk

BARONHAWK: Well, being unapologetically black, obviously male, and arguably young (28), I fit plenty of "descriptions." My sixth sense, if you will, is on at all times. That being said, living in DC—which is overwhelmingly left leaning—is great, because I can take moments in any of my sets and play some tracks that take a stance on injustice. In fact, I do it both at home here and when I'm away.

TOMMY: I’ll just add that DC has definitely seen a rise of creativity, which has been amazing for nightlife. More and more people are living here just because it’s a great city and not to work in government necessarily.

The NeedlExchange in the mix

OXD: We feel a natural kinship to you guys in a way—connected by our music but also by the fact that we are the uncommon trio. What do you enjoy most about being part of a DJ collective? How do you guys balance each other's individual styles?
TOMMY: We feel it, too! We started our party as a weekly Sunday party, and we’ve been really patient in building up TNX. We used that weekly party as a time to really get to know one another as DJs, evolve our sounds both individually and collectively, and learn how to intuitively support one another both on and off the decks.

BARONHAWK: I love how quickly our own individual communities and crowds were able to organically merge together. We trust each other's threshold for music taste. I know these guys won't play something stupid or some cheesy BS. I know they trust me to do the same. That way we're all allowed to essentially play whatever we want.

OXD:  It's 4AM, the night is coming to a close, and you have a packed dance floor. The security guard comes in and motions that you can play one more song. What do you cue up as your closing track?
BARONHAWK: This is usually when I strike up the courage to play my own production. If everyone leaves because my track sucks...well I'm sure the roadies and the closing bar staff don't mind [Laughs.]

BIL: Oni Ayhum. Any song. His tracks are gorgeous and ethereal and they're like ten minutes long, so the final twirl gets a slight extension as well.

TOMMY: I love closing with a romantic disco tune. I’d probably go with Chic's "I Want Your Love." And I’d use the Todd Terje edit, because I’m on the same page with Bil to make that “one more song” moment really count with a longer version.

OXD: Tell us about one nightlife experience that changed your life.
BIL: Dancing to Gay Marvine, under the stars with family and friends, atop a mountain in the middle of nowhere, and in West Virginia (HONCHO Campout, Summer 2015).

BARONHAWK: Graduating high school and jumping into a "locking" cypher to exchange with Junious Brickhouse at Breakin For Birney [the longest-running b-boy/b-girl jam in DC] in 2005. Cypher and urban dance culture are a lot like classic Shaolin flicks. When you find someone that has a better grasp on the style, you might challenge them for a few rounds to exchange understandings of the movement. The DC urban dance scene in those years was solely focused on b-boying/b-girling (breakin). I would be the only locker at pretty much every jam. It kind of sucked for me. So when I found someone else in DC that's doing this style...and he's dope...and he's a brother!? He very quickly became my first mentor as he started Urban Artistry. I trained and elevated both my freestyle urban dance and DJ crafts rapidly.

TOMMY: There have been so many, but I’d have to go with seeing Horse Meat Disco in Provincetown for Bear Week. The music, energy, performances, and poppers really showed me what I wanted out of queer nightlife and renewed my commitment to giving that to DC.