We chat with London disco hero Ray Mang before he plays Le Bain on Friday, August 10th, alongside LA's favorite Tommy Moye.
LE BAIN: London just made the headlines here in NYC thanks to Trump's visit... What has been the mood in London’s streets, pubs, and clubs in the past year or so? What kind of influence have politics had on the London dance music scene, if any?
RAY MANG: Was he here!? Damn, I must have missed that! I’ve been too busy campaigning for a hard Brexit to pay much attention. Extraordinary political times on both sides of the pond indeed. Whatever next! All the more reason to party. Or leave the country. Or both. 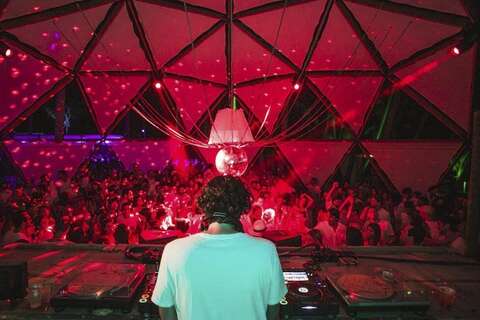 "One of those moments where, from a solid starting point, everything dropped into place as if by magic."

You're considered one of London's disco heroes, and we've picked five of your records that we love. Tell us one story behind each of them. The first one is "Number One" from 1996!
A couple of evenings home alone in my bedroom studio of the time (s1000, Matrix 1000, 1080, STE, Studiomaster board and a few bits of outboard FX etc...) in Marylebone around ’95. Felt good to play around with and over those beautiful elements. Minutes after I finished the mixdown, in walks Dimitri (from Paris) and Alex (from Tokyo). They liked it! Dim asked on the spot if he could include it on his Deluxe House of Funk compilation he was in the process of putting together for Mixmag!

Oh, that's where I remember that record from! Next up: “Praia Do Londres”  from 2001.
I’d started doing some work for iconic Belgian label R&S through my friend David Fouquaert (later of The Glimmers with Mo and Eskimo Records early days). He asked me to do a remix of a track he had coming up. I put a few things down and got my long time collaborator and good friend Pete Z involved for some keyboards. It was quickly obvious that we had put something together which had nothing to do with the original track we were trying to remix, and "Praia Do Londres" was born. David loved it, as did Renaat, so it went out on R&S!

Third song: Ray Mang feat. Crazy Girl “Animal Attraction”  from 2005.
I’d been involved in doing some releases for Eskimo records, working with my good friends The Glimmers and shooting over to Belgium quite a bit during the early noughties. Eskimo was keen to do another 12, so I did a few tracks. My super talented friend Tiff, aka Crazy Girl, was living close by at the time. She was over at my house, liked the backing track, and was up for top-lining!

Another Balearic classic of yours: “Look Into My Eyes.”
Like so many, I’d been in love with that melodic motif since my teenage years in the '80s and that infamous subway scene moment in a certain well-known film. I learned more about its origins in later years and always fancied playing around with it at some point. One hot summer night soon after the birth of my eldest daughter, I had a free night in my studio and did this. One of those moments where, from a solid starting point, everything dropped into place as if by magic.
And one of your latest: “CC Amor” (Barefoot Beats, 2017).
Soon after playing at the idyllic tropical eight-day New Year festival Mareh in Bahia, Brazil, in 2015 and 2016, my friends who run this and also the limited 10” vinyl label focused on locally-infused sounds, Barefoot Beats, asked me to contribute. I made the track "Batidas Da Paixao" that came out on 003 and also this extended edit (for the floor and 004) of a great version of a Marcos Valle track. The nod is obviously in the title!

You’ve been touring non-stop these past months in Brazil, Bangkok, Paris, Mexico City, and around the UK.
Yes, it’s been a really fun few months, and a first for me in some wonderful places I’ve always wanted to go to, like Colombia, Singapore, and Thailand! Loving traveling, meeting so many interesting people, and making new friends. And of course hearing new music.

What would be your ideal 2018 summer party set-up and context?
Well, I seem to have been chasing the summer for the last few years, which suits me just fine compared to the usual English weather, so I’ve already been lucky enough to be a part of summer parties in some amazing dream situations around the globe. There are still plenty more, some of which are already booked to happen and others that I’m sure will surprise me!