We caught up with NY fashion icon Patricia Field, before she celebrates her birthday (and NY Fashion Week) at Le Bain, on Sunday, February 10th, with Christina Visca, Louie Vega and Lina Bradford.
LE BAIN: You’re a native New Yorker and one of NY fashion’s greatest visionary. Tell us about the 20-something Patricia, studying Liberal Arts at NYU. What kind of hopes and desires did you have when walking the streets of New York in the early and mid 60’s?
PATRICIA FIELD: Walking the streets of New York in the 60's was nothing new for me, being born and bred in Manhattan. Thinking about it now, I would describe it as a continuation of my reality.

Did you learn a lot at NYU?
NYU was a great education. At that time, I had no set future career plans. After graduation I saw a classified ad from Alexander's department store looking for a college grad to fill a managerial position in one of their departments. I felt confident that I could easily and successfully fit the bill and took the position. I was correct and found major success in my first job. My first step into my career.

You said you always “went to work highly fashionably.” Can you describe your outfit at that time?
I loved fashion and knew it, having learned many details along the way. I went to work stylishly because it was expressive and fun, designer suits and stiletto heels driving to work in my Red SunBeam Alpine sports car –the same one in Elizabeth Taylor's movie 'Butterfield 8'. I remember a raggy silk suit which I purchased at Loehman's on Fordham road in the Bronx and wore it with a large brim black straw hat. It all looked great in my red sports car driving to the South Bronx in those days. 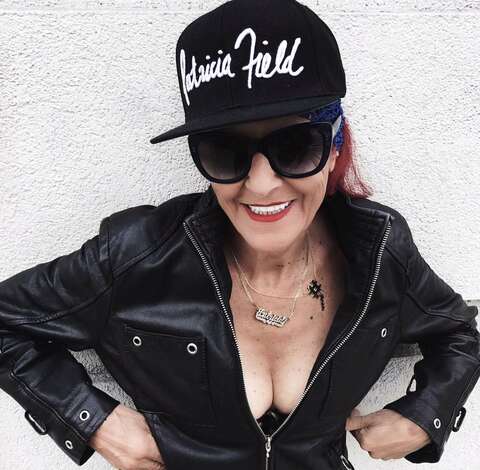 In 1966, you opened your first boutique, first on NYU's campus, then in 1971 you moved on East 8th street. That was the beginning of the punk years… The NY Times wrote you are  "first and foremost a punk den mother.” What do you remember the most about those punk years?
Honestly my most vivid memory of punk rock years was whenI wrote a song and realized that I was a punk rock lyricist. It was all natural and by accident.

After the punk years came the club kids and drag queens. Your shop became a headquarter for the NY nightlife scene until its final location on Bowery closed in 2016. Being at the center of the NY nightlife golden age, what are the memories you cherish the most?
Love the club years, which represented dancing, fashion, and happy times. Happy people dance and dress with inspiration, party party party. These are my memories.

That is when you met Christina Visca.
Christina and I first met during the club years at the Paradise Garage in the 80's, which was our favorite and most inspirational club in New York.

Tell us about your involvement with Lower Eastside Girls Club?
I became aligned with the LES Girls Club through my friendship and respect for Jenny Dembrow and my philosophy of communicating, exposing, and inspiring young women to the endless possibilities that their lives hold.

When you closed your boutique after 50 years, many described it as the end of an era in NYC. You did not. You said "What I love about NYC after all these years is what I loved about NYC many years ago.” If your boutique was a “Fashion Bazaar”, what kind of bazaar is New York?
New York qualifies as one of the greatest world bazaars. Like all great bazaars New York offers many unexpected surprises and choices –in culture, art, and fashion for example.