We catch up with the King and Queen of House, Tony Humphries and Ultra Naté, before we celebrate New Year's Eve in Le Bain's skyline. Plus: Tony delivers an exclusive mix just for you! LE BAIN:  Tony tell us about your mix?
TONY HUMPHRIES: It was designed to showcase various genres of music anticipating that diversity for New Year's Eve. The selections were played at an uplifting energetic holiday tempo to warm us up for the celebration.

What does it tell us about 2019?
It tells us the music business is healthy and the bar has been raised quality-wise. There is so much to choose from now.

What’s your weirdest New Year's Eve memory?
TONY: There have been a few, but it’s always weird participating in the time countdown in other countries then looking across the world to my hometown waiting hours to watch the ball drop in Times Square.

ULTRA: The year I found out I was pregnant with my son over the Christmas holiday and then NYE came a week later. The show was in Moscow – I had been a few times at that point and always enjoyed it. Everything shuts down for a couple of days after NYE so I did my show that night and it was great but then my road manager and I had nothing to do but sit around in the hotel for 2 days with the whole city closed down. I think that's when it really hit me I was having a baby and my mind snapped – I just needed to be home to absorb the gravity of this! It was a totally planned event but when it happened I was still like OMG I have a baby inside me! I couldn’t change our flights so I bought a new set out of pocket and went home that day.
And the most precious?
ULTRA: Same occasion [laughs].

TONY: Every NYE is special to me. I’m always full of optimism about the new year and what better way than starting it off with a room filled with happy people in NYC at Le Bain. 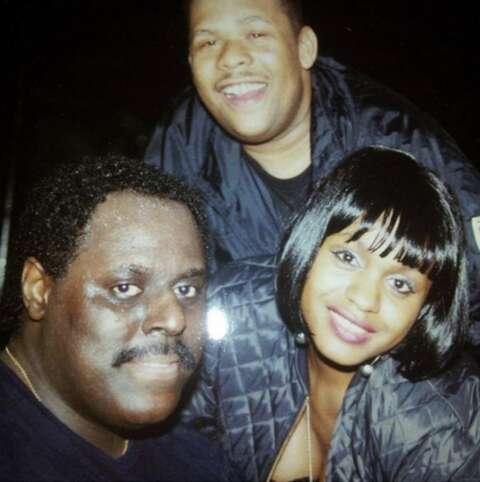 Tell us about that picture.
TONY: What a picture! Such great memories. A historical bond. I was so grateful to Teddy (Douglas), Ultra, Jerome, Tony F and the entire Baltimore crew who’d drive 4 hours almost weekly to [my] Club Zanzibar in Newark NJ. Their productions helped define who I was and what the club represented. They’re still at the top of their profession 30 years strong.

ULTRA: I was still a baby really – just out of high school and completely in love with house music in it’s early origins and sound system club culture. I was a part of a whole underground culture and I never saw it coming. I was new to the concept of being a singer/songwriter and I was suddenly on a major label and traveling back and forth to London … clubbing every weekend and putting every quirky lyric, melody or concept down on paper and tape for the world to consider. And it was all happening! Teddy Douglas who is also pictured was one third of my production team “The Basement Boys” and they were my safe haven to grow and experiment with in this new music culture and career I had fallen into.

What did Tony represent at that time?
ULTRA: Tony cemented what we were doing and presented it to the Jersey club scene and the rest of the world through his KISS FM show. It was at Tony’s Zanzibar party where I really first witnessed people reacting and loving my song. He played it 3 times that night from start to finish and the kids would  sing it at the top of their lungs! The walls were sweating in there; it was so much energy and Tony was driving it all – he dictated the sound and the songs that defined the culture at the time. He helped me see the power of the music and gain a confidence in what I was doing organically.