Brooklyn nightlife agitator Maŕa believes in "social and political changes through music" and is ready for the future. We sat down for a chat before she plays Le Bain on Saturday, March 2nd.

LE BAIN: Your love for music has been nurtured by your Argentinian parents. Tell us about your earliest memories of music and how they have shaped who you are today.

MAŔA: My parents immigrated to the US in the early 90's and I grew up in upstate NY with my sister. As a child, I remember my dad’s love for electronics, we had this large screen TV with the wooden borders and a speaker at the bottom, and when he was home he would put on these music videos from VH1 or MTV, artists like Sade, Crystal Waters, Michael Jackson, Björk would always play. I was completely exposed to so many genres: electronic, experimental, classical, house music and rock. From watching these videos I was influenced by dance culture, fashion and art, and I was so inspired by these beautiful artists, being able to express themselves through music and visuals.

I’m listening to your most recent mix and we can hear the EBM and industrial strong influence...

I am a fan of industrial music yet artistically, I draw upon a synthesis of sound and art ranging from industrial, like you mentioned, and more avant garde, experimental and underground sounds. My sets are fused with the energy of Dax J, Adam x, Ancient Methods, Julia Govor, Boston 168, Developer and Johannes Heil yet that’s only part of what inspires me to create. I also listen to Ryuichi Sakamoto, Rebekah, Todd Sines, LDY OSC, Daniel Avery, Silent Servant, Brian Eno, Phon.o to name a few.

"Time is changing, love is real and the support is high."

It says the mix is recorded live from the “strip club in Boston”...

Last year I got the privilege to meet some dope people out in Boston and I opened up for Mary Yuzovskaya and so this year they asked me back to play for Demo Radio which is a platform focusing on femme and queer community. They hosted an event at a small strip club on a corner in lower Roxbury and then after that event I played in a loft for afters which was really sick. I love playing intimate parties in unspoiled spaces; the scene in Boston is small but growing and the curation from these promoters are really something special that deserves visibility.

In the mix introduction, you said you believe in social and political change through music. In that sense, what are your most important examples in music history?

I would say in the 50’s and 60’s Bob Dylan and Joan Baez during the civil right movements, they were very influential to many, I feel their lyrics were meaningful and pertained to the zeitgeist of the period. Punk rock definitely, especially in its proto-phase with Patti Smith and the MC5; their anger and emotion were so visceral and instigated an entire youth movement. There are so many others I could mention like The Beatles, John Lennon, Billie Holiday, Bob Marley, Michael Jackson, Public Enemy, Madonna and many many more. These artists celebrated life and concerts were ritualistic, the people packing out stadiums, dancing and singing together, filling the world with so much love and power of togetherness through music. I am drawn to the creators who generate art for a purpose far greater than themselves.

Tell us about Cultivated Sound. Would you describe it as a label, a collective, a platform?

Cultivated Sound is a hybrid between a collective and a label in Brooklyn, New York. We are focused on showcasing visionaries locally and internationally. Our mission is constantly evolving, we strive to integrate a multi-vocal paradigm with input and direction from everyone involved. To cultivate sounds and introduce to our followers new music, electronic, techno, experimental, classical while collaborating with writers, performers and all art forms to create something novel. This year you will be seeing more design, interviews, podcasts, artist residencies, live sessions with artist and compilations and releases from the label. 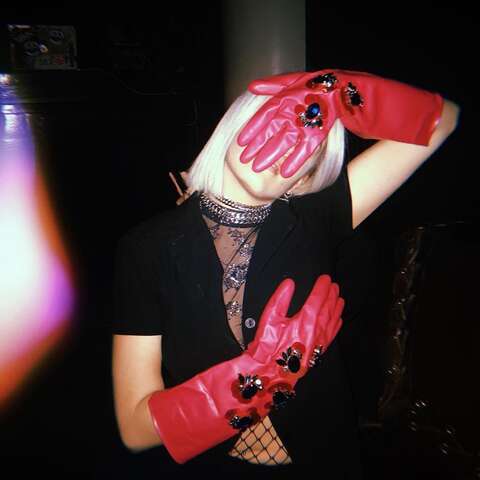 Photo by Chamberlain Zhang
About Cultivated Sound’s mission you wrote “Our version of this world radiates a new mark and propels all that forward its fruition.” Can you explain?

Lately I took a break with doing parties, I felt a lot of repetitiveness happening in the scene. Everyone doing the same party and nothing new happening. We decided to update the look and introduce something a little bit more experimental and intelligent. We want to introduce to the world our definition of sounds, cultivating sound. To inspire those artists who have been making music since the 80’s or 90’s and also including those newer artists who just started but need support from a platform like ours. That’s what we are here for. To elevate, inspire, push forward, and create. For me a team and community is the most important thing, nothing would be anything without everyone involved giving their voice and being heard.

You have worked at many Brooklyn clubs: Good Room, Analog Brooklyn and Elsewhere. Would you say we’re entering a golden age for NY (and especially Brooklyn) nightlife? What is missing?

We are truly living in a very special time and only more space will really demonstrate that for us. I always felt nightlife was missing the queer community and I think many clubs, promoters and agencies don’t book enough women, femmes and women of color. This industry is still very saturated with men dominating and women always feeling put down by assumptions of knowledge and skills. Time is changing, love is real and the support is high. There are many queer artists who are fiercely creative and generating new sounds and art, they deserve visibility and a platform. There are also many collectives, labels and agencies with powerful socio-political missions who deserve attention and decision making power as well. When you look who's behind that, strong and powerful women. It’s really wonderful to see all these strong collectives yet I feel there is still so much left to do like incorporating diversity in actual positions of power and within the institutions that have the authority to make change. The time is here, this year is going to be truly beautiful, to build something wonderful, to build something powerful, your team, your community is the most important aspect to develop.