Sitting down with a NY icon before he plays Le Bain all night, Saturday, November 26th.

LE BAIN: Summer '16 has been very busy for you, between your party Tiki Disco, your pop-up shop Come Again and The Lot Radio...What was the highlight of so many highlights?
LLOYDSKI: Definitely Come Again. That was a project I've been chipping away at for as long as I can remember. A lot people may not know this, but I had a record shop with my friend Andy (Roctakon) when I was 18 living in Washington, DC. I left it prematurely to move to New York, but since then its been one of those boxes I've been dying to check again. To see it finally come together after all these years was a real moment for me. 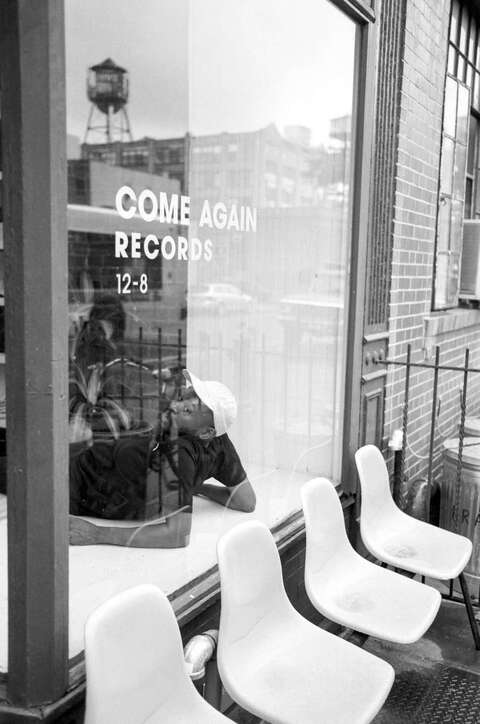 Will Come Again come again?
Absolutely! I'm already planning for the next installment next summer. The experience taught me that I'm capable of doing a lot more than I give myself credit for. It was a lot of work, and more than that, I was putting myself out there in a way I hadn't before. However scary that may have been, I was passionate about the project and I think that showed.

The Lot Radio has a huge impact. How do you explain its success?
The Lot Radio has had such a huge impact because it comes from an honest place. François [Vaxelaire, the man behind the project] and I were best friends years before talk of the radio even began. When he approached me with the idea, I'd be lying if i said I jumped on it right away. However, I could see his passion for the project. It was his dream, so I decided to take a chance. Little did I know it would become my dream, too.

"Our goal was to create the alternative and maybe sell few doughnuts in the process."

What makes you the most proud so far?
The community of people that has built around The Lot. From the friars across the street, to the locals who pop in everyday for coffee. The Lot has given a voice to a lot of people who may not otherwise have one, and a community that supports it. When we started The Lot, our goal was to create the alternative and maybe sell few doughnuts in the process. Neither of us could have ever imagined the amazing community of people that came with it. It's exciting to watch.

Tiki Disco has been getting bigger and bigger and even took you to Japan...How much bigger and better can it get?
The sky's the limit.

As a DJ, one of your fans says "Lloyd Harris is better than all u motherfuckers" and he's right! How does that feel?
(laughs) Who talks like that?  First off, I encourage that person to get their head checked. Second, however flattering that is, I don't think it's true. I'm no better than anyone else, but if you wanna talk about who has the most fun when they DJ, I'm all ears.

What's up with your music production?
I haven't been in a studio in over 6 months. I play around at home, but honestly, I'm really enjoying just playing weird records and being behind the scenes right now. That being said I couldn't be more excited about the coming seasons. I'll be playing by myself more (which I love), The Lot Radio just got its beer and wine license, and I've got two major projects I'm working on which should be announced before the year's end. This is my last ditch effort to do way too much ...Fuck it! The draw bridge to the Lloyd Castle is down for a limited time. Don't get left in the moat! It's really dirty down there.