We had a chat with legendary Balearic DJ José Padilla before he returns to New York to play Le Bain's sunset on Friday, July 1st.
LE BAIN: New Yorkers are very excited to see you play as you don't come here very often.
JOSÉ PADILLA: I've come a few times to play or record my album in the Battery Studio. I love New York. I always enjoy my time and stay some extra days to shop and go to restaurants. I've probably come 3 or 4 times to DJ, so not very often. Last time it was in this small club, I can't remember the name, but it's the first time I will play in New York facing the sunset!

You are one of the first modern DJs. You started your career in the late ’70s probably around the same time as New York seminal DJ David Mancuso. Did you hear of him while living in Spain?
I started DJing when I was 16 without getting paid and just for the love of it. I had another job to survive. It was 40 years ago. At that time in Spain, we didn’t even have music press! We didn’t know what was happening in the rest of the world. When I started working in the clubs in Ibiza in the early ’80s, I started hearing about it mostly through records. It’s funny you ask, because last summer in Ibiza, I was talking about David Mancuso with my friend, DJ Harvey, who knows him personally. I was asking about David and Harvey told me he’s a very sweet, quiet guy.

“Are you José Padilla? What are you doing here?”

If we compare your and Mancuso's contributions to DJing, you're probably less focused on the sound system, because you traditionally play open air, close to the beach, and facing the sunset. It's more about being synchronized with nature. Do you agree?
In any situation, I would always prefer to work with a good sound system. [Laughs.] I have a new residency in a place called Rooftop 9 in San Antonio, and the original sound system was not good enough, believe me. The new one is coming this week! If you play in a club or at a festival and you play quality, serious music, of course you need a good sound system. The difference is that if you play outside with the landscape, sunset, and beach, people are unconsciously more relaxed and open, and music hits them in a simpler way. 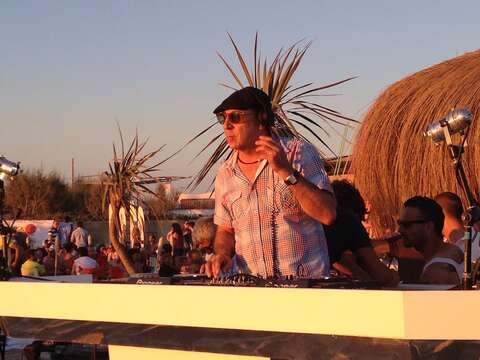 José Padilla
Do you have an example in mind?
I used to play in the off season on the island of Formentera at a small bar. It was a fantastic spot to hang out. The system is crap, the mixer is broken, and the CD players lay next to the coffee machine, but I just love to play there! Sometimes it's not so important. I play for nothing; they just give me food and drinks. I just go there with some CDs and people can't believe it. They come up to me and say “Are you José Padilla? What are you doing here?” People are enjoying their drinks, relaxing, watching the sun, and I can play anything I want. There is no pressure.

In the early ’80s, Spain's DJ Cesar had a huge influence on your style. He was the only one traveling to NYC to buy records and bring them back in Ibiza. Do you remember one record that you discovered through Cesar?
One of them was GQ's “Disco Nights” of 1978. Cesar was working at Pacha, which was a small club at the time, and Pacha was sending him to New York a couple times a year to buy vinyl records for the club. Also, it was quite normal to have some people coming from England with boxes of records and sell them around the club. That was one of the reasons why I started to play records in Costa Brava. Some English guys were coming with boxes of vinyl records to sell them at the beginning of disco. It was the only way to hear and buy new music.

Using vinyl records on the beach at that time must have been very messy with the sun and the heat!
It was awful! I had to rebuy my entire vinyl collection. I’ve been playing CDs for a while. I only use vinyl for very special occasions, like this one I'll be playing in Bali in August. It’s an amazing place for a beautiful sunset. They asked me to play for 90 minutes while people have dinner, and they're making a menu for the food as well as the records I will play. So I’m gonna bring some vinyl there just because of that special situation.
Can you share your first memory of the sunset?
I think it was when I was 2 years old. I used to live in a small town close to Barcelona in Spain. I was at the balcony of our apartment and I remember the sun coming down. I think that’s my first memory, but it’s more a sensation than a strong memory. Then of course I have plenty of amazing sunsets in mind from India, Japan, everywhere. And one will always stay in my mind. It was like a painting of Renoir and an act of God. It was in India's Andaman Islands 15 years ago. The sunset got purple, the ocean looks like silver oil, and an elephant was swimming in the waves. That is the one!