We chat with the Italian DJ and super-producer (who collaborates with the likes of Dimitri from Paris and Daniele Baldelli) before he plays Le Bain on Friday, June 15th.
LE BAIN: You once said you grew up in Rimini’s discotheques. Tell us about your first nights at the discos.
DJ ROCCA: My first experience in a discotheque was during the early '80s. It was a club called New York, in Miramare, Rimini. That experience changed my life. Pery, the resident DJ, used to play a very eclectic selection, mixing Nina Hagen with Aleke Kanonu, Cameo with Kraftwerk, James Brown with Cat Stevens. It was really unusual for that period! The sound at that time, in the other discotheques, was more commercial. I was very lucky to discover a dance club that opened my mind.
When did you decide you wanted to work in music, open a club, and become a DJ and musician?
I decided to open a club called Maffia in 1995 in my town [Reggio Emilia between Parma and Modena in the north of Italy] with some close friends. I went to the Music Academy, so the other partners convinced me to take care of the music selection; this helped me to become the resident DJ. We used to book guest DJs from abroad. I learned a lot from all of them–people like DJ Harvey, Roni Size, DJ Food, Adam Freeland, Darren Emerson, Moodymann, Zed Bias, Propellerheads, DJ Krush... 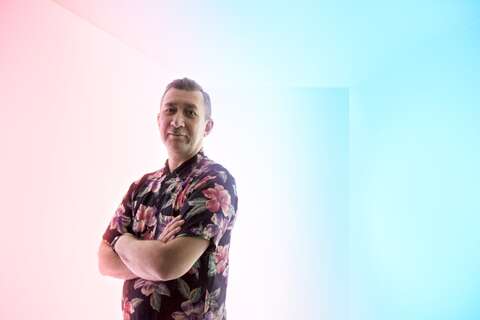 "Our club Maffia was a cultural experiment."

Tell us about Maffia.
Maffia was a cultural experiment. We presented DJs that had never been heard in Italy before. At that time, you couldn’t hear drum and bass, leftfield house, or breakbeat in our country. We also used to publish our monthly Maffia magazine just to explain to our crowd what that kind of music was and where it came from and connected it with graphics, streetwear, and philosophical backgrounds. We also ran a record label and an artist agencies, bringing our guest DJs to other clubs all over Italy. Music blogs didn't exist in the mid-1990s...
What do you miss the most from running a club?
What I miss more is being a DJ resident. It was great to do a warmup set, start a night with an empty dance floor, and play until the club was packed for the guest DJ. Now, I'm usually the guest!

Tell us about Reggio Emilia, the city where you live.
My town is a little one, but really close to everywhere…close to Bologna, and not far from Milan. We have a great tradition of music, and great tradition of artists, too…from jazz and rock to blues and dance. In the 1980s there were nearly 100 clubs playing all kind of music in a radius of 30 kilometers around my city! I was very lucky to grow up in a place where the music has been so important.

Did you experience the golden age of cosmic disco in Italy or were you too young?
I was really young, but not so much so that I didn't experience it. I used to go to listen to Daniele Baldelli, Mozart, Rubens, and Pery–all those eclectic DJs. My top cosmic experience has been the very first one, at the New York discotheque in Miramare that I told you about. It was a dark club with music never heard before. It was so intense and deep!

As a producer, you have an impressive line up of collaborators: Dimitri From Paris, Daniele Baldelli, Howie B, Jazzanova... How would you describe your contribution to collaborations?
It changes from partner to partner. What I do with Baldelli is different from what I do with Dimitri. My input is always my taste, which fortunately is very compatible with my partners. Every person has their artistic soul, and I can harmonize mine with theirs.

What’s the Rocca touch?
Sometimes the Rocca touch could be in a rhythm, sometimes in the arrangement or in a particular sound from a synth. We start from there, and go ahead until we’re both satisfied.
And what inspires you the most?
My inspiration is my records collection. I own records of every genre of music, and when I need an idea, I dig in my collection and always find something inspiring.