We chat with the NYC DJ's DJ Ivan Berko as he visits India and before he plays Le Bain on Saturday, May 5th.
LE BAIN: I heard you're in India.
IVAN BERKO: I'm currently relaxing in an undisclosed location in southern India which I can only describe to you as actual paradise. Time out from Manhattan life is pretty crucial, and this 2-week break is doing wonders.

What was your first music moment after landing there?
The most striking thing thus far about India has been the lack of music in public spaces. As a New Yorker, I'm so used to being pushed music 24/7, whether it be Top 40 in a cab or Top 40 in the drug store. There seems to be a respect for silence here. I can dig. I heard some amazing '70s Bollywood jams in Bangalore last week. Stuff from the '70s with insane drumming and percussion. Everyone in the bar was dancing and getting dramatic just like in the movies. So refreshing to see and hear.

And inspiring?
While in Bangalore, I stopped by the Radel Electronic musical instrument shop. They specialize in digital tampuras, tablas, etc. I'm with a few friends and we all bought a unique instrument and have been jamming down here in paradise. Expect a triple gatefold LP coming 2019 by The Spicy Bangalore Boys! [Laughs.]

There is not much info about you online, which is a luxury. You have a music collaboration with NYC DJ Jex Opolis (as Moon Tan), have released records on Beats In Space (as Hidden Fees), and David Mancuso "changed your life." Did I miss something?
I would love to mention the latest party series I have been throwing which is called 'Freedom 2 Dance'. Back in January, I was playing at Renate in Berlin with my friend Mikey Almond from NYC. The party was pretty special all around, but we were really blown away by the closing DJ set by Budino. We decided that we needed to bring her over and starting a new party series would be the best way to do it. Long story short, the party was a smash and we are going to have them every other month in a secret location. As far as making music, I think there is a Moon Tan track coming out soon on Jex's label, Good Timin'. Hidden Fees is a life long project and we will most likely put some sounds together very soon. I also have some solo club music in the works... Expect a taste of that at Le Bain on Cinco De Mayo! 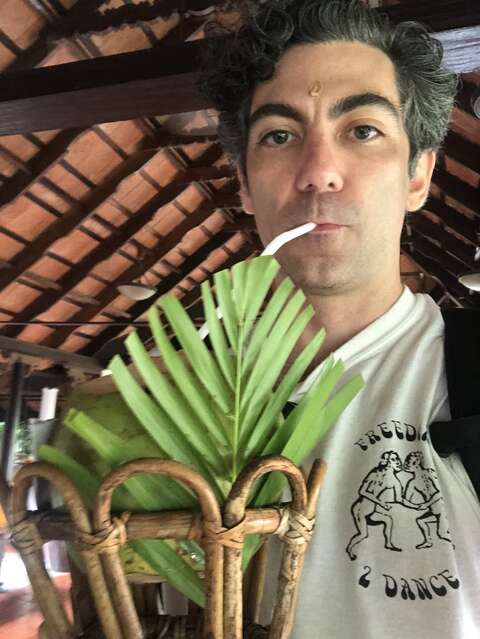 Let’s move back in time decade by decade. Could you pick one record that embodies your 2010s?
"Mangy Love" by Cass McCombs is a contemporary classic. As far as songwriters go, Cass is in the upper echelons. I've listened to this record hundreds times. Amazing music plus incredible lyrics. I got to see Cass play most of these songs a few months before "Mangy Love" came out at Bowery Ballroom. You should go see him if you haven't.

Your 2000s?
"KA" by Excepter pretty much sums up the first half of the '00s for me. My band Ghost Exits would play with Excepter all the time and this record kind of summarizes the feelings I had in the post millennium. I don't think a band like this could exist now. I think this record is the perfect product of those times. It's kind of the soundtrack to crumbling Clintonian Neoliberalism and the rise of deep electronic surveillance. Were they protest music or were asking us to protest music? You might of had to have been there.
1990s?
I started coming into Manhattan in the mid '90s to buy CDs with friends. We would hit all the spots and then get lunch at Dojo for like five dollars. I was really into experimental music by way of Sonic Youth and would try and find Glenn Branca CDs. It sounded so real when I would bring them back home to suburban NJ. I knew I had to live in the city at some point. This is kind of a cool guy pick, though. I listened to the self-titled Elastica record just as much.

1980s?
Whenever my parents had a party in our place, it was Steely Dan's Greatest Hits. Even though most of the tracks on this CD are from the '70s, it really reminds me of growing up in the 1980s.

Back to the future. What about your 2020s?
Being musically obsessed, I'm pretty excited to hear what is about to come. There are so many talented young people releasing music at a rate that couldn't exist pre-internet. I'm not a mind reader so I can't say what's coming, but the fact that any kid can go online and digest the entirety of recorded music leads me to believe that we might be hearing some really monumental, magic music soon.
You’re based in Manhattan's Chinatown and you once said you do not want to move back to Brooklyn.
I absolutely love living back in Manhattan. There has been a great feeling on the streets lately that kind of reminds me of when I first moved back here in 2000. I feel like people were sleeping the last decade and now everyone is activated. People are dancing and letting loose while sharing new ideas. Can't beat that.