Meet H330, the new avatar of Parisian producer and DJ Master-H, before he returns to Le Bain on Saturday, December 17th.
LE BAIN: You just celebrated the 25th anniversary of the legendary Scottish label Soma on the Concrete boat in Paris. You've been one of their artists for a long time.
MASTER-H: Soma started in 1991 and I joined their path in 1998, so it’s been about 18 years with this iconic imprint. I feel blessed actually. Five years ago, they asked me to celebrate their 20th anniversary at Fabric London, and we repeated it for the 25th anniversary at Concrete in Paris. Time flies. Looking back through all these memories I’ve shared with those guys, it feels emotional. I’ve learned almost everything I know with them. They always gave me the chance to express myself and took me the way I am. The party at Concrete was magical, playing alongside Soma's EinKa, Charles Fenckler, Slam, and Funk D’Void.

Another partnership with the Concrete gang is your release on their label under H330. Why a new alias?
The idea came from Brice Coudert, the artistic director of Concrete, as he planned to create Concrete Music. We met in my recording studio to listen to some of my tracks. He proposed that I release some, but under another alias, which was really exciting for me after all these years. That was also a good timing because my approach to making music was totally changing. The funny side of it was that nobody was aware of that project, and we decided to keep it secret and create a buzz around it. We made it public in early September when I played for their huge event at the Gare Saint-Lazare in Paris. 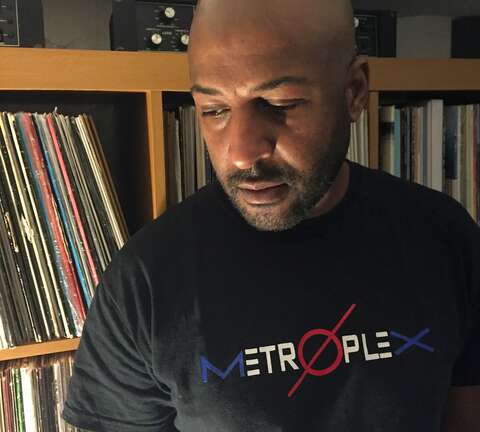 H330, aka Master-H (photo by Cécile Gouaned)
What's different when you perform as H330?
It's a Master-H 2.0 in a way. [Laughs.] You can expect something more futuristic, breaky, deep indeed, and dark sometimes…

Laurent Garnier’s just said of the H330 record: “I don’t know who’s behind that record, but it’s a killer!” We know Laurent is a close friend of yours, so is it just a coincidence?
When the EP was mastered and ready to go, Brice decide to send it to Laurent as he knew he is a really important person in my career. I was really glad to see that Laurent really liked it, but I was frustrated that I couldn't share that moment with him, as I always send my new stuff to Laurent myself. But in a way, it’s good to have feedback when people don’t know about you because they judge the music and nothing else.

As a close friend of Laurent, what’s your explanation for him still being such an influential figure in the scene?
First, he loves music more than anything else after his family I guess. Second, he is a workaholic. I've worked hard since I’ve met this guy, to tell you the truth. And third, he never looks back; he is always looking forward. No need to say how a talented DJ he is. I feel lucky that I’ve met Laurent and the guys at Soma. They were a game-changer for me!