Fresh off his tour, we catch up with NYC DJ, record collector, producer and artist GE-OLOGY. Enjoy the reading before dancing to his deep crates at Le Bain on Friday, December 16th.
LE BAIN: You’ve been traveling in Europe a lot these last few months, like in Paris, Lyon, Berlin, Amsterdam...
GE-OLOGY: To be honest, I've been traveling a lot these last few years! Generally when I'm touring in Europe, one tour alone lasts about 2 months. It's late November now, and I just completed my autumn tour, which began on the first day of October. This was my third and final European tour of 2016. One of the most important things for me and my agent is to always expand into new territories, which gives me a chance to work with different promoters and play in new venues for new audiences. And that's not just happening in Europe, that also includes Asia, Australia, North America, and beyond.

What are you bringing back from those trips in your bags and in your head?
What's most valuable are the experiences and the people I meet. I get to share with them all of this amazing music I've collected over the years and some I've discovered around the world. Having the opportunity to travel and interact with different people from different cultures that may even speak different languages from myself, yet at the same time, building deeply shared bonds through the music that's brought us together, is a very powerful experience.
Do you have a specific story?
Last month when I played at Le Sucre in Lyon, France, there were these guys in the front dancing, smiling, and enjoying the music so much during my set that night. They were losing it the entire time up until the very last song I played, then came over to thank me very graciously at the end of the night. I thanked them as well, then my brother Pablo Valentino told me that those guys were Syrian refugees. So it's quite deep. Imagine having to flee your homeland or whatever types of atrocities one has witnessed or had to escape from, yet ending up in a foreign land enjoying music another invited foreigner is playing (records you may have never even heard before, yet are profound and purely beautiful). That's what real, honest expression in the form of music can do. It's spiritual. 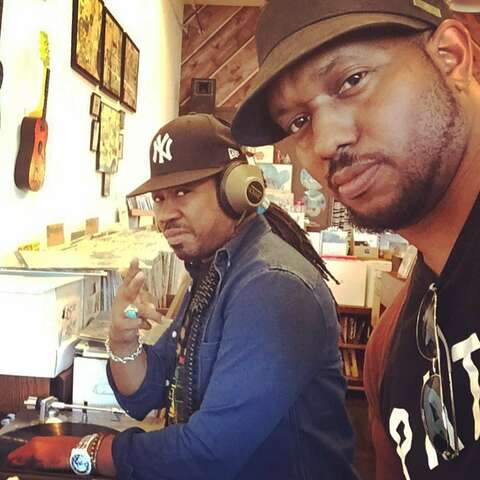 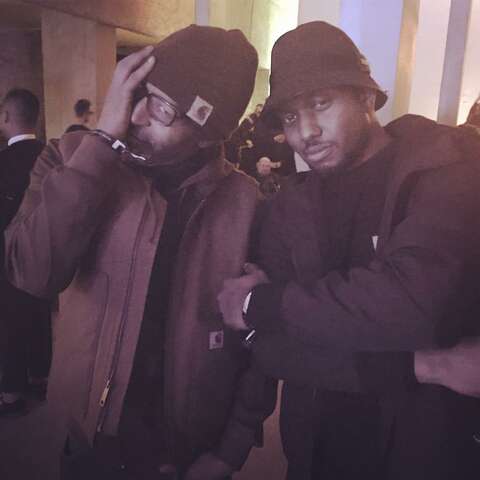 "We're actually much more alike [...] than we are different."

That's the real power of music.
I think the more people expand their world view and get out and see the greater planet beyond their so-called "safe" comfort zones better known as our home, street, neighborhood, town, province, city, state, country, and continent, it becomes abundantly clear that no matter how different we seem from afar, we're actually much more alike at the end of the day than we are different. And that's why my record bags are filled with various genres of music that I play throughout the night, bringing the people on a journey that musically takes them all over while still cohesively telling a story that moves them on the dance floor. It's a great honor and responsibility to have these opportunities to spread love through music across the planet, and it's a never-ending learning experience as well.

I've read that European clubs sometimes bill you as being from Detroit, even though you’re a New Yorker. Is it just because of your affiliation with Theo Parish's Detroit-based label, Sound Signature?
Well in my honest opinion, the number one reason simply comes down to laziness, because there's no justifiable reason for this reoccurring mistake. There's plenty of information about me and my story is well-documented, pre- and post-Internet. But who knows, maybe it does partially have something to do with the Sound Signature affiliation, as this is a fairly new phenomenon for people to be mistaking me as being from Detroit. And don't get me wrong, anyone who knows me knows I have lots of love for my family and friends from Detroit. It runs deep, because back in the day, my grandfather and uncle both lived there for many years in the once culturally historic Black Bottom neighborhood (also known as Paradise Valley). It was where some of Detroit's legendary blues, big band, jazz clubs, and other black-owned businesses and institutions all existed and thrived at one time. I deeply love and care for my friends and fam who are from there, but I was born in Baltimore and have been a resident of NYC for close to 30 years now.

Another mix live from the Brownswood Basement
"All vinyl...all killer."

Detroit still sounds cooler than NYC from a European point of view.
I think it depends on your historical awareness. New York City has changed a lot since back in the '80s when I first started living here. The cultural importance of the city was much more prominent and uniquely visible back then...almost domineering. Even today, there's still no place like NYC, but it's much less different from other cities now than it long used to be before. The city has gotten way too expensive and unaffordable to live in, which has forced out many of its great artists and creative minds that once thrived here. With this mass gentrification and corporate-dominated makeover of the city, it's lost some of its raw cultural character, grit, and attitude that NYC is famous for.

That did not happen in Detroit.
New York is a big corporate city now, so maybe in this present time Detroit sounds edgier which equals as cooler to some I imagine. I think there is evidence that a newer generation of people listening to, dancing to, playing, and/or making dance music today are currently going through a period of romanticizing selective elements of Detroit and Chicago's rich history of house and techno music culture without being informed or knowledgeable of NYC's deeply historic foundational blueprint that architecturally laid the groundwork for what originally started this party and club culture for us all. But there's hope still, because through my travels, I've definitely seen youth of various ages out there carrying the torch and trying to push the culture forward properly. What’s the coolest European city right now in terms of music and creativity?
I've enjoyed every place I've been visiting, no matter how big the city or how small the town is, but there is one place that's fresh on my mind at the moment. I just ended my tour in a small coastal town in Italy called Porto Sant'Elpidio at a club named Harmonized. It was my second time playing there, and each time was something special. I particularly love their attention to detail when it comes to sound, hosting invited guests, and curating the nights they put on. It all makes the experience really memorable for everyone present. It's amazing that in this small town, there's this really dope club that pays the highest attention to detail when it comes to overall quality in regards to sound system. Think A1 equipment that's well cared for, an Alpha Recording System rotary mixer with isolator, finely tuned black Technic 1210 turntables with internal grounds, custom RCA jack panel, Mogami high-end leads, Blue LED light kit for the pop-up target lamp, and click-removed pitch control.

Hey, we have an Alpha Recording System mixer at Le Bain!
They also upgraded the house system, added 2 additional speakers (giving the dance floor a surround sound effect), and upgraded to the lighting system, which creates a subtle low-light ambience and mood. The crazy thing is that I've seen venues with more money in much bigger cities with greater access to resources care a lot less about the state of their equipment and quality of sound, so it's quite appreciated and highly impressive when you come across a venue like Harmonized run by genuinely nice people who mutually share a deep love and care for the music and the culture and knows how essential all of these details are. This is the approach I'd like to see a lot more of, because if we start at least there, hopefully it will inspire the future generation of Richard Long and Gary Stewart type sound design geniuses to think outside the box and push the quality of sound experience forward once again.

"Through the music, one can creatively take the people on a magical journey."

Speaking of sound systems, you wrote that David Mancuso was your hero. Could you share an anecdote you have about this NYC legend?
Where do I begin? I feel we owe him a great amount of gratitude. Forty-six years ago, Valentine's Day in 1970 (the year I was born), David's Love Saves the Day party at his loft space (647 Broadway) would be the domino that changed everything. All that would follow—like The Gallery, Paradise Garage, The Warehouse in Chicago, and Odell's in Baltimore—have all been greatly influenced by an "invitation only" intimate gathering that simply began as a rent party at David's loft. Records were not mixed and the pitch control on the turntables was not engaged, as it was important to David to maintain the integrity of the recorded music and sonic purity. He used warm analog high fidelity components (McIntosh amplifiers) and high-end Klipschorn speakers. He thought that only the music should be the center of focus, and through the music, one can creatively take the people on a magical journey. I hope this rich legacy he's left us will continue to inspire many future generations to come.
What’s up with your album on Sound Signature? Last time we chatted, you said it might be out in spring 2016. We’ve been waiting!
[Laughs.] I've been waiting, too. We all have! This long extended wait for me is like what I'd imagine Chinese water torture feels like without allowing myself to go insane. But on a more serious note, I'm the artist in this situation. I don't run the label, so I'm not in direct control of when the record will be released. I've recently been made aware of some unfortunate factors that have contributed to its delay, but those things are currently getting sorted out. And as I understand it, this album will probably end up being an even stronger final product in the grand scheme of things, so I guess everything happens for a reason. Plus, there could likely be some newly added surprises by the time of its released. I'm hoping the long wait and the patience people have granted us will soon be rewarded. 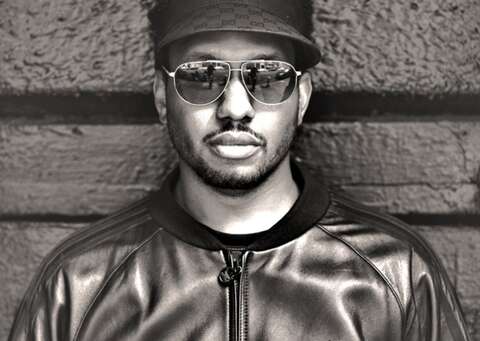 The Inner Core Of GE-OLOGY 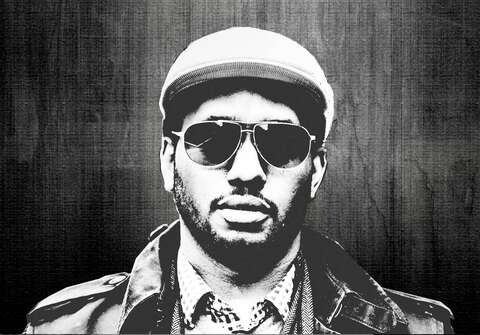