On Friday, March 4th, Busy P., Boston Bun, Superpoze, and the rising star Jacques celebrate the documentary "French Waves" amid Le Bain's skyline. The Parisian filmmaker Julian Starke gives us a preview.
LE BAIN: You’ve been working for the last three years on the documentary French Waves, which is about the ’90s French Touch golden age. How did you come up with that subject?
JULIAN STARKE: This project started when I read Mia Hansen Love’s script for Eden. My roommate at the time was the actor who was going to be the first character in the movie. Reading the script, I realized that there was a strong connection between the group of friends portrayed in Mia’s movie, the people who would become the founders of French Touch, and what I was living myself. We were running a collective organizing parties with young electronic DJs, directing music videos and short movies, launching a clothing brand, releasing records, and all kinds of stuff in a DIY spirit. I felt that connection, I wanted to do something about it, and I totally got into French early electronic music. 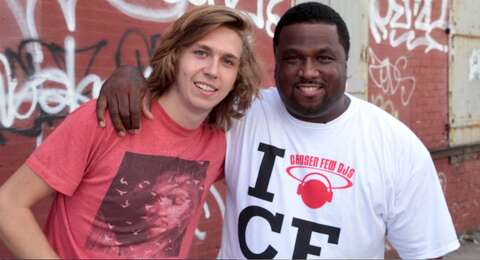 You’re only 24. You were around 4 when Daft Punk released their first album. What was so fascinating about that time?
I have been totally fascinated by those older people telling me stories of their twenties. I discovered a lot of music of the ’90s that really touched me because they are the roots of a lot contemporary music. Then, little by little, I realized that my work was too focused on the past. I was losing the connection with my present, and almost being nostalgic of an era I didn’t live in. I decided to integrate younger generations in the film. Instinctively, I chose young artists whose music I love. French Waves is more a human story of a generational handover. It’s about people sharing their love for music and being passionately involved in what they do every day.

"A human story of a generational handover."

That period of time in dance music is well-known for its hedonism. Do you think hedonism is something we have lost?
I think that my generation lives a quiet and strange form of hedonism. In a way, we reproduce what has been done in the past by working in collectives and helping each other, but we do not have an ideal we are all fighting for. It’s not a fight for your right to rave or party. Today, electronic music is totally accepted as an art form. It is normal for people to go clubbing on the weekends and listen to star DJs. In France, you can even get some state money to organize parties. Nowadays, artists just have to care about the best way to express themselves with the technology available. It is more solitary and less a collective movement. Which interview was the most striking?
Cornelius Harris, who is Underground Resistance’s manager. I have heard a lot of people from all generations talking about Detroit and its huge importance in techno music and history. I had the chance to meet and interview Juan Atkins and Carl Craig in Paris. It was absolutely fascinating. Then I had the chance to travel to Detroit with the French producer Rone who was invited to Movement Electronic Music Festival. As soon as the plane landed, I had a strange feeling of being at the exact place where everything started. The town is so depressing. You can feel its decline. Detroit has been one of the richest towns in the country, and today it feels like everyone has left. It was really not easy to get in touch with the people of UR. They are really tough and their will is to help people locally, so if you ask them something, for an interview for instance, they will ask you to do something in return for their neighborhood.

"[Techno] came from a really dark perspective of the future."

How did it go with UR?
We finally arrived at the UR’s headquarters where they have a record shop, museum, and studio. We were not allowed to film there, so we only recorded the sound. We had a two hour conversation with Cornelius who explained to us in detail under what conditions techno was born. It came from a really dark perspective of the future. At that time, the life expectancy for a black male was 23 or 24 years old on average. Those guys did not accept that and decided to take control of their futures. He told us, “The beat is the heart. As long as there is beat, it means that you are living”.

Tell us about Jacques, who will be performing live at Le Bain.
Jacques is one of my closest friend, and we’re part of the same collective called Pain Surprises. Jacques is a very special human being. He lives in a squat, even though he could live in a normal house. He is really direct in his exchanges with other people and thinks differently than the majority. He created his own imaginary world, which is full of sense and beauty in its own way. It makes him a peculiar character of the French electronic scene. Since we were 13, he’s been playing music a few hours every day. He founded a lot of bands and played with other people, but we all told him to do his own stuff, because his solo work sounded much better. A few months ago, he released his first EP, and it was really well-appreciated by our generation. I personally love his music because it is really new and singular. He uses the objects around him in the place he lives in. At the same time, it's still quite mainstream and open.

How do you think the Internet has changed the way your generation enjoys and creates dance music?
As we have instant access to all music of the past, we are not in a hurry to create something new. We take time to discover everything—to integrate and rework it. It is not hard for us to get in touch with newer music—we only have to do a quick search online to get it—but to find a pearl of some underground stuff from an unknown era and digest it, to make something new, is what really makes your style. Today, we live a lot through the Internet, and I think it makes success less fun or festive. It’s less of an event than it used to be. We stay at home and watch the number of views, likes, and shares going up. At the same time, two people from a two different places of the world can talk about a new unknown track they could use to make a new sound. The Underground and mainstream slowly become fuzzy. That’s really new and thrilling. Today, you can be totally yourself and 100% sincere in your art. In a way, we are all still dreaming.