We chat with UK's new disco-house hero before he rocks Le Bain's skyline on Sunday, August 28th.
LE BAIN: Resident Advisor said 2015 has been your most successful year to date. How is 2016 looking so far?
FELIX DICKINSON: Thankfully all the big bookings from last year have decided to have me back, so it's a case of continuing where I left off and adding a few new ones. In the last few weeks, I got to close the Genosys stage for Block 9 at Glastonbury and play at Barbarella's at the new Love International Festival in Croatia. Last weekend, I played at Panorama Bar for the first time, and I've had a few other new big ones that will hopefully turn into regulars. Gottwood was bloody amazing last month, and I'm looking forward to coming out to America again as I didn't manage to get out there last year.

"A lot of things make me want to act like a punk."

Your own label is called Cynic Music. Why do you think we should stay sarcastic or cynical about the dance scene?
[Laughs.] Hmmm, I'm not sure. When I started Cynic, it was pretty much how I felt after getting a bit disillusioned about how some record labels and artists conduct themselves, so decided to do things myself. I think I may have softened a bit now and am more open to working with other labels. I don't think it's that helpful to have a me-against-the-world attitude in what is quite a small scene, but I do still think it's good to not be too naive to how some people do business. I think when I first started raving, I kept my rose tinted glasses on most of the time, but I'd say it's probably best to leave them at home when you start trying to make a living doing what you love.
Deep in your heart, do you feel more punk or hippy?
Depends on what side of the bed I get out of. It's nice to feel like a hippy some times, but there's definitely a lot of things that make me want to act like a punk. I'm a child of the acid house scene, and that was definitely as much if not more to do with a punk attitude of sticking two fingers up to the man (or woman) as any kind of hippy thing. 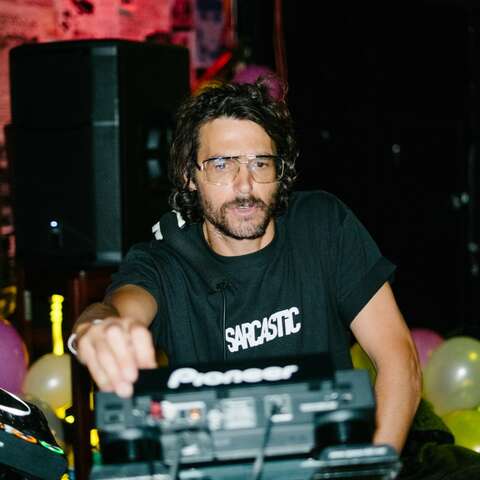 Felix Dickinson
A lot of DJs have a deep love for Japan, specifically the Japanese attention to detail and their love of dance music. What would you say makes your own relationship to Japan special?
I love Japan, and really appreciate that I have had so many opportunities to play out there. When I was going there regularly for the Lifeforce parties, I made a lot of good friends, some of whom I started the Dedication project with. I would stay in this coastal town called Kamakura and get to record with a bunch of musicians out there. I've since released some of the music I made with them on Cynic, DFA, and Golf Channel, and later this year I will have a couple tracks on Claremont 56. (It's actually gonna be Claremont's 56th release, which is pretty cool.)

How is Kamakura?
Not much really happens there, which I like, so when I'm there, I kind of just record music and hang out. It's a really old town, it actually used to be the capital of Japan, so it's got loads of temples, but other than that it's not too crowded. There's a really nice café in the vegetable market that has good bread and soup, and the master baker who runs the place is a bit of a genius and makes beautiful bread. One time he made me a loaf of bread which was rolled out and twisted up to spell my name like some kind of edible bit of 3D graffiti.

You’re obviously a key player of the UK club scene and you’ve got a big connections with Japan, Croatia, India, and SF with the Wicked Sound System. What about New York?
I love NYC and I've got a lot of good friends in the city. Although I don't play there as regularly as some of the other places you mentioned, I've done some really fun gigs out there. PS1 was the first time I played in NYC, which was quite a debut. I've played Beats in Space a couple of times (and will play again this time I'm out). I've released on DFA, Golf Channel, Rong, and more recently M2M, and Justin V will be releasing a remix he's done of one of my tracks on his label My Rules later this year. So when you look at it, I've actually got a fair few connections with your fair city!