We sat down with legendary New York DJ, producer, and remixer, David Morales, before he returns to Le Bain to celebrate Gay Pride on Sunday, June 30th.
LE BAIN: Your life and career read like a movie, from your tough childhood in Brooklyn to your worldwide success as an artist. Could you share one of the strongest memories that you have from Brooklyn in the early ’70s?
DAVID MORALES: My strongest memory of the '70s is not something that I can really talk about. Let's just say that I wouldn't want my kids doing what I did in those days. The one thing that I can say is that in the early '70s, I really started to listen to and collect music. I would sit by the stereo and play records. 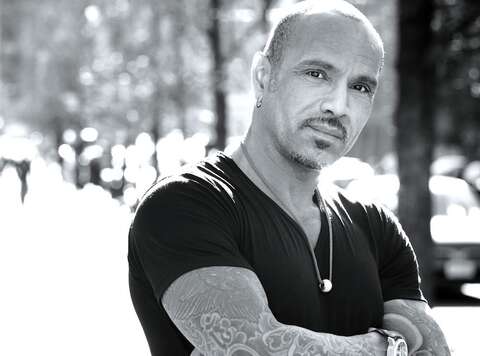 "The Loft was pure stereophonic sound, whereas The Garage was a beast."

Through the ’70s and ’80s, you were a regular at seminal NYC clubs The Loft, The Paradise Garage, and The Sound Factory…three clubs that have shaped the club culture as we know it today. How did these clubs impact your own life?
I played at a house party once in the late ’70s and I was really into commercial music. I had never been to The Loft. The Loft was a members only club. Well someone brought what was described as "Loft music." There were a lot of records that I had never heard, and it was a great education and inspiration. After that gig, I wanted to know where I can go and buy these records, and I ended up going to The Loft and becoming a member and friends with [Loft's mastermind] David Mancuso. I made a graffiti poster for the club and painted a shirt for him that said "The Loft." David also gave me a few books that I still have that are about sound. David was a purist for sound. He taught me that it wasn't about the mix but about the selection.

What about The Garage?
Both The Loft and The Paradise Garage were musical institutions. I used to go to both clubs as a clubber and dance the night away. I would be there from opening until closing. And trust me, that was a lot of hours! The Paradise Garage was all about sound, but a different kind of sound. The Loft was pure stereophonic sound, whereas the Garage was a beast. [Garage's DJ] Larry Levan would pick you up off the ground and spin you around without you even moving. The Paradise Garage was the first New York club that I played at. I was 21 years old. Both of these clubs shaped what I consider to be proper clubbing, where it's all about THE MUSIC.

David Morales in the mix

In the ’90s, you became one of the first superstar DJs and traveled the world at a time when it was still a rarity. Do you remember the first time you traveled outside of the US for a gig?
The first time that I travelled outside of the US was in 1988 to play in Osaka, Japan. The club was called Genesis, and it was something out of Star Trek. The Japanese technology-wise were always ahead of everyone else. In the DJ booth, there was a UREI mixer, 3 decks, an Emulator keyboard, and a Simmons drum set. Also, the Japanese audience was so hospitable and friendly that I was sad when I left.

"[You need to create] a family that bring the life into the club."

You received a Grammy Award for Remixer of the Year in 1998 and you collaborated with all the pop stars in the ’90s. As a producer, could you share one studio story of when the magic happened?
I would have to say that the first artist that happened with was Mariah Carey when we rerecorded "Dream Lover." It was the beginning of a long relationship that spanned over 15 years. I ended up being a part of all of the remixes that she wanted to re-sing. I was the only person that she was comfortable with doing her vocals for remixes in the studio. I learned a lot about producing vocals working with Mariah. It's really all about working with a professional that knows what they're doing.

You owned the well-known and respected Montreal club Stereo until it closed in 2008. You definitely know what makes a good club. What's the key?
In my opinion, you need to have a "community" that lives in the club. By that I mean you need a family that brings the life into the club. You need good sound, lighting, and an overall objective to create something special. It's hard to do all of this and make a profit. Very few have done it. It takes a lot of work and energy. You have to have passion to want to create and give.