We catch up with Italian born, New York based producer and DJ Danilo Braca, before he celebrates the first release of his label TSoNYC -The Sound of NYC, on Friday, February 22nd at Le Bain.
LE BAIN: Tell us about your earliest music memories as a child.
DANILO BRACA: I must have been 2; very, very young. I remember walking from my bedroom to the living room, where my dad was playing music. He used to play 50s rock'n'roll, blues and r&b to wake the family up on Sunday mornings. He would tell me the songs he was playing, always had a story about who had made it. He would then keep on picking records, maybe from the same year, or artist or maybe writer….It was a journey that continued for many years, we were very lucky to share it. Nowadays I‘m digging through his huge record collection, and I still find new music to play.
Where you raised in the city, on the countryside?
I was born in Rome, Italy and when I was 9 we moved to the countryside about 30 minutes away from Perugia, a bit in the middle of nowhere. I was finding my music culture at home. My dad founded the first Hi Fidelity Magazine in Italy in 1971 and he ran it until the mid-80s, I was surrounded by promos that majors were sending to him to get a review in the magazine: soul, jazz, blues, rock'n'roll, progressive rock and so much more. That was my everyday record shop!

Any special record that you remember?
'(Your Love Keeps Lifting Me) Higher and Higher 'by Jackie Wilson. This is a record  that was often on the turntable at home. A really happy song and I made an extended version for my dad funeral ceremony. It's very unusual for an Italian church, but I played it loud and everybody started clapping. 2-year-old Danilo Braca
Your dad used to collect records and vintage musical gear. Did you have the right to play with those?
It was part of our life to have music at home. Probably a bit too much for my sister and my mother! He was often traveling around the world to gear shows. He was going to Panasonic in Japan, McIntosh in upstate NY, Philips in Holland. I was not allowed to touch the records and equipment, but when he was traveling I would go dig into his collection, I would turn on his amazing sound system and then try to get my mom to not tell him...
Tell us about the first vintage gear that really makes an impression on you.
Without no doubt, it was the Thorens TD165. The first Turntable that I ever touched! I was 2 years old, it was pretty mesmerizing.

You started DJing in Italy in 1986, at the age of 13, which was the golden age of Italo-disco. What kind of impact had the genre on your style?
We never called it Italo disco then, it was just pop dance music of the time and place. TV videos were a big part of it too, they would play on a TV program called DeeJay Television dedicated to dance music video clips, an Italian dance focused MTV so to speak, from 1983 to 1990. The title of the track was on the screen, I used to keep a notebook of names of songs and artists–at that point I was a teenager, DJing at school and birthday parties, so I had to keep up. 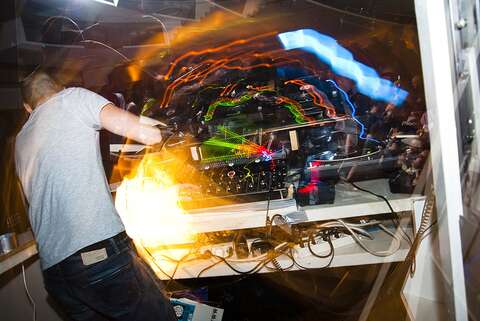 "I actually just had a little flashback of how I got here."

When did you start going out?
In the mid-80s, when I was a teenager. I discovered there was a dance club not far from our home out in the countryside called Palladium. In 1989, the place became The Red Zone club, the resident DJs were Sauro Cosimetti and Ricky L, who had phenomenal taste. It was an incredible club. They would bring in international DJ artists like François K, Frankie Knuckles, Tedd Patterson, Satoshi Tomiie, Kerry Chandler, Paul 'Trouble' Anderson, and live performances by Massive Attack, Adeva, Digital Underground, Les Négresses Vertes, Jocelyn Brown... That club really shaped my taste for dance music and culture.
1986 is the year of the release of the House anthem “Can You Feel it?”. Did you feel it?
In 1986, Chicago house music wasn't popular in Italy. I didn’t have the chance to listen to the instrumental version. But when in 1988 they released in the UK the version with MLK voiceover that I first heard Larry Heard’s timeless jam. It blew my mind! I remember that version also had the Acapella of MLK on the flip…it was a new tool to mix too. I discovered only later that the speech was on the b-side of Stevie wonder 'Happy Birthday' from 1980… and it had always been into my house!
Fast forward 33 years later. You live in Brooklyn, work as a DJ, producer, sound engineer, run your own studio and web radio... You just created your label, and you’re about to release your first record 'Oh My Lord'...
I actually just had a little flashback of how I got here, it’s pretty wild. About 10 years ago, my dad showed me a rare video tape with an interview of Little Richard. It was set in a church with a big gospel choir singing, powerful spiritual stuff, and Little Richard being his charismatic incredible self, saying all kind of crazy shit. I had never made an original track at that point, I had been making edits for my own use, but had never really put out something of “mine”. That video inspired me in so many ways, I really got obsessed with it, so i ripped it, chopped it up, added a bass line and that was it. I kept on tinkering with it over and over the following years, and fast forward to now and that little sketch became “Oh My Lord”, the record I am releasing.

You’ve hired a dream team of remixers: DJ Spinna, Ashley Beedle, DJ Nature, The Revenge, DJ Rocca, Radius Etc… How did that come up?
They are obviously an incredibly talented group of artists, but we also share a connection. I could tell a story about each one of these beautiful people, about how we met, when and how we saw each other again in New York, in perfect timing for me to ask them to work on this project. They all did amazing work. I really believe in fate and I think this release will bring energy to who is going to listen, play and dance to it.
Tell us about your connection with the musician Troy Mobiuscollective.
10 years ago, when I first put together the sketch of this track, I had chopped up a Fela Kuti sax sample for the lead line. I then decided that I wanted to do it right, so I asked my good friend Nickodemus from Wonderwheel recording if he knew someone… Of course, he did! He put us in contact, he came to my studio and the rest is history.
You’re planning to release one record every month after this one. It seems it’s a good time to run an independent label. Am I crazy?
I think now it’s a great time to start an independent label, as long as you have vision as to why you are releasing music, and don’t try to be popular. This record is going to be dedicated to my dad who recently left this planet, each release will contain something that my dad showed me, or that we discovered together. As you can imagine, it’s a rather emotional thing and I can’t wait to share it all with you.