We chat with LA-based French producer, Cherokee, before he plays Le Bain on Friday, October 26th.
LE BAIN: You've been spending a lot of time in LA lately; I feel like your music and aesthetics were made for California...
CHEROKEE: It's been quite a long time now that I have the chance to travel and perform around the world. When I first visited Los Angeles three years ago, I immediately fell for the overall vibe, the weather and the people. It is very inspiring because I feel that in some way, I already knew the city through Hollywood movies and TV shows. I do not actively try to add that 'California influence' in the music I make, I think it is something that comes very naturally.

"[In the late 90's], when French Touch was at its peak, my favorite thing was to sit in front of MTV and watch music videos."

Your sound is also very French, with strong references to the mid 90's French Touch sound: sampled, filtered disco-house sound with a lot of groove. What were you doing in early 1997 when "Homework," the first album of Daft Punk, was released?
At that time I was way too young to witness the release of "Homework." However, a couple of years later when French Touch was at its peak, my favorite thing was to sit in front of MTV and watch music videos such as "Music Sounds Better With You" by Stardust, "Lady Hear Me Tonight" by Modjo, "Starlight" by The Supermen Lovers, "One More Time" by Daft Punk, "Sexy Boy" by Air... Since that time, I had always wondered how these artists were able to create their music and this is what inspired me to start producing music.

Cherokee was initially a duo composed by you and French producer Darius. Darius has now a successful solo career, and you took over Cherokee. How would you describe that evolution and its impact on the sound of Cherokee?
To be honest, I just continue to work with the same thrive and passion, and I always remember why I started this journey. At times, it can be easier to work solo because ultimately, you are the only person who will take decisions that may change the course of your career. The music is now more personal, and it comes from me –I feel that I am able to take risks and be in control of where the project is heading. Since Terence [Darius] left in late 2013, the project Cherokee has kept on growing immensely and today I can say that I feel grateful to have achieved some of my childhood dreams.

What kind of dreams?
Being able to perform on the three continents... I still need to perform in Japan though [laughs]! 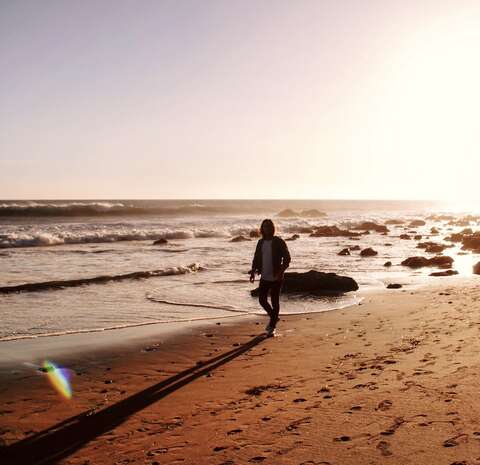 You're part of the label Roche Musique, which is certainly one of the most important electronic French label from the last 10 years. How do you explain the long-term success of the label, as a collective?
Everyone behind Roche Musique had been long-time friends, before the label was founded. It only felt natural to release some of my music with them, and I believe that everyone on the Roche team is passionate, and able to bring something different to the collective, which is a big factor in its success today.

What's your favorite thing about Los Angeles? A lot of French creatives now live in LA, how does that feel being a Frenchman in LA?
The thing I like to do the most is to drive through the canyons, by the beaches during late afternoon and at the end of the day try to to find a place to watch the sunset... Whether it's on Ocean Blvd in Santa Monica or Mulholland Dr in Hollywood, it always feels pretty special.