South London's Al Dobson Jr delivers a sunset mix of his favorites before he plays Le Bain's rooftop for Été d'Amour on Sunday, July 10th.
LE BAIN: Tell us about your mix.
AL DOBSON JR: This is a random selection taken from the central stash at home, some of my personal favorites included, and I recorded it in Warsaw at the homie Luca's spot whilst on tour last month.

What’s your earliest memory of contemplating the sunset?
It's hard to say. I contemplate the almighty sun each day, so it must have been whenever I became conscious as a boy, but I don't have a first distinct memory.

"It's a very crucial and critical time for people to look within."

You’re based in South London, but you were raised in Bristol where Caribbean music had a huge influence on you. If you had to live on another island...
By way of Canada, I would say Jamaica, and I'd live in the hills with fertile ground to plant fruit and green herbs.

You said your "deserted island record" would be Slum Village’s Fantastic Vol.1.
I've been listening to Fantastic Vol 1 & 2 since I was real young at school with my walkman. James Yancey was a master teacher and that record taught me a lot. It's still teaching me, so I would bring it. 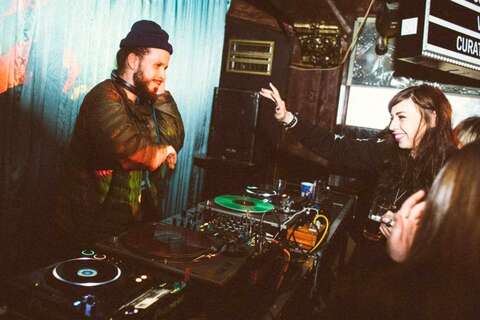 Al Dobson Jr
Baatin of Slum Village once said, “Slum Village is a contradiction; a paradox. We break rules. We do things other people wouldn’t do.” Do you feel close to that statement as an artist?
For sure. With monoculture taking over, people are finding it hard to think for themselves. Now is a very crucial and critical time for people to look within. The most crucial and critical time I've seen.
You describe yourself as producer, selector, composer, percussionist, vibist, and barber. Of all those things, what is your favorite to do in the summer?
Play vibraphone at the Vale, but it's a true blessing to select music on a NY rooftop.