Before lighting up the congressional switchboard with their joint event at The Standard, Hollywood on International Women’s Day to support Swing Left, trans-rights luminary Janet Mock and womenswear designer Jonathan Simkhai discuss what the day's all about and how we can all take action. JONATHAN: Happy International Women's Day! I’m excited that we're celebrating together at The Standard, Hollywood. What does the day mean to you, and how has that changed over time?

JANET: For me, International Women's Day has always been a reminder of the progress we must continue to make. Over this last year, it’s been really powerful to see everyday people who have never done any form of activism begin coming forward in powerful ways beyond just saying "girl power" or "women's rights are human rights." They were actually taking to the streets, calling their representatives, finding ways to connect with their communities, figuring out how they could fine-tune and change the places they exist in.

And what's equally important is to remember all the women and allies who have put so much of their own lives and bodies on the front lines for people to have access to the benefits and the rights that we have access to today. I think about Sojourner Truth, Marsha P. Johnson, and Audre Lorde, amazing women who have done good work for us. We should remember on this day to pay homage to the many people who have helped us get where we are, and to remind us that there's so much more to do. What does it mean for you?

JONATHAN: It's incredible to be able to stop everything you're doing and just celebrate women. That being said, I think we should be celebrating them every day.

JANET: With your company, you celebrate women every single day.

JONATHAN: That's exactly it. It's every day for me, but it's just nice to carve out that whole day, stop what we're doing, and really celebrate women. I'm excited to celebrate with you at The Standard. What do you think this day will represent in five years or even twenty-five years? What do you hope this day will become?

JANET: I hope it'll just be a reminder of where we once were. I hope that when people look back five or ten years from now, we’ll just be like, "Remember that time when women didn't have the right to control their own bodies? Remember that time when we were being paid so much less than men, that women of color were being paid less than white women? Do you remember when disability rights were not something that we talked about just normally every single day? Remember when we said the term 'women' that it didn't include queer women, gay women, gender nonconforming women, and trans women? Do you remember that time? Oh my God, we were so crazy then!" [Laughs.] 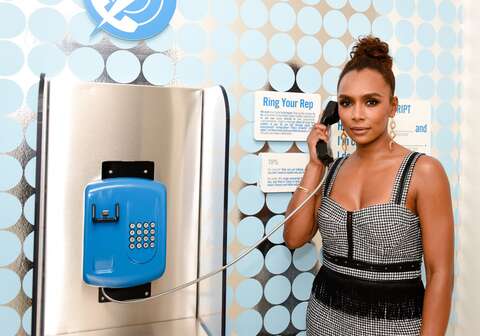 JONATHAN: It would amazing if that was all just be a distant memory. I was blown away by how stunning you looked at the Oscars this past Sunday. What did you think about that night, and what did you take away from it?

JANET: It felt like it was a more solemn, serious celebration. The industry is going through a reckoning like many other industries. There was a greater urgency to address these issues, to address these gaps in representation on screen and behind the camera. To be on stage with Oscar nominees Common and Andra Day who were singing a song about civil rights pioneer Thurgood Marshall, telling us to stand up for something, and to be celebrated in that spotlight alongside nine other powerful activists and real-life heroes like Cecile Richards, Tarana Burke, and Patrisse Cullers was amazing. To have the Oscars take that moment to celebrate these real-life heroes was really powerful and empowering, and I think it's also a reminder of the work we must continue to do. It was a call-to-action to the beautiful, talented people in the audience that they, too, need to use their platform to stand up for something.

I’m also noticing this grander, greater movement within the #TimesUp initiative to actually figure out to-do items for us to be able to actually combat the gender pay gap, create representation behind the scenes and on camera, and how to tell all kinds of different stories, not just stories we've always been fed all of these decades.

JONATHAN: When did you discover your political voice?

JANET: I probably first felt it when I was working as an editor of People magazine. I had been there for about five years and had been settled in my career, and I felt a greater urgency to tell more important stories, stories that mattered beyond just celebrity. I love celebrity, I love popular culture, I love Hollywood and entertainment, but I felt unfulfilled and I knew I also had my own story to tell, which I wasn't really talking about at the time. When I was a teenager, I did the greatest activism I could ever do, which is to tell myself my truth and live that truth as an adult. My activism really began when I decided to the step from behind asking other people questions, and actually answer those questions for myself about my life story, my journey. From there, telling the truth where oftentimes people get punished for telling the truth, where we're often told to be private and ashamed about our experiences, was a form of activism. “The personal is political” as that feminist statement says. It started there and it grew more and more as I published my book, and then I was able to tell more stories behind the camera of girls and trans women. JANET: When did you realize that using your platform, making clothes and making women feel empowered and beautiful, could help advance the rights of women and LGBT people?

JONATHAN: I grew up in a small town outside of New York City and one of the things that made me love fashion was just the way it made people feel. I worked in the stockroom of a clothing store when I was 14 years old. A woman coincidentally asked me for help and I jumped at the opportunity to put an outfit together for her. It was the most amazing feeling to see how happy the look made her feel. Obviously fashion is not the most important thing, but it does give you that extra little boost to conquer the world.

I want to make women feel good, not just through their outfits but through my platform, too. It’s about using my platform to get fans of the collection to understand just how important it is to fight for women's rights, transgender rights, LGBT rights, and equality. I love our friendship so much because you really inspire me to be more of an activist and to use my platform, and I hope that will continue as our relationship grows moving forward. What are five steps people can take to be better activists?

JANET: What really helps is starting from the space in which you operate from, doing your own self-excavation and exploration, thinking about how you're positioned in the world. What are the benefits you've been given because of your identity and the way in which you live in the world, and what are the things that you feel that you have not benefited from? For me, I started with myself. That was number one. I looked at myself and I looked at my experiences and I said, "I came into the world as a black and Native Hawaiian trans girl," but I came in feeling empowered. I had access to education, I'm able bodied, I don't have any disabilities that hamper me from being able to get access to spaces. Also, the way that I present, the way that I look, also helps me navigate the world more easily than a lot of my sisters and siblings. That’s allowed me to step forward and be able to stand up for them in ways that other people stood up for me.

Three is showing up, showing up to court rallies and marches, but also to things that are not Instagram-able, like showing up to the local community board meetings, showing up consciousness-raising groups, showing up to a book club and by helping pick out books by underrepresented voices from all over the world.

Four is if you're not engaged in the political process, figure out ways in which you want to engage. You can help by rallying behind certain candidates that hold your same beliefs, who you believe will actually create a more open, accepting, and safe world for all people. Or it's helping get out the vote and organizing ways to get people to the polls who can't physically get there. Be really unapologetic about being someone that wants to see our country and world be a more accepting place for everyone.

And then five, whatever resources that you have, whether it's donating your time, donating money, or amplifying other people's voices, messages, and campaigns through your social media. Everyone needs joy and beauty, but we need a balance of messages.

JONATHAN: Amazing. I think I have told you this before, but I was one of three boys and all three of us were born gay. It was such an interesting process of coming out and being able to share our story with other closeted men and women. Hopefully that gave others the power to come out and deal with what they were going through.

We're partnering with Swing Left for this event. What do you think about Swing Left and when was the first time you were acquainted with them?

JANET: Like all things I discover, I discovered it through the internet. I really love the way in which they really thought about supporting district candidates who are in particularly vulnerable places, where democratic seats were lost by very thin margins. Swing Left creates resources and really educates the public on how thin a lot of the margins were that could have really helped make progressive ideals actually push through to the house.

I think the 2018 house elections are really our biggest and best chance at actually putting progressive agendas forward. What they taught me is that with just 24 seats, we can bring back the house in 2018, which is our greatest chance at actually defeating a lot of the agenda that's been happening, whether it's the anti-trans bills or immigration being rolled back for Dreamers or pushing back against the NRA or women having bodily autonomy and the right to choose. All of those things we need to push forward, so this is a crucial time. Being able to partner with Swing Left on International Women's Day is vital and important. 8 Young, Creative Voices on Why They're in the Opposition