Raised by leftist revolutionaries in Bogotá and now a Paris-based conceptual artist repped by super-gallerist Emmanuel Perrotin, Iván Argote is a master of the innocently offensive. His flaccid obelisk, "Strengthlessness," is the latest installation at The Standard, High Line. 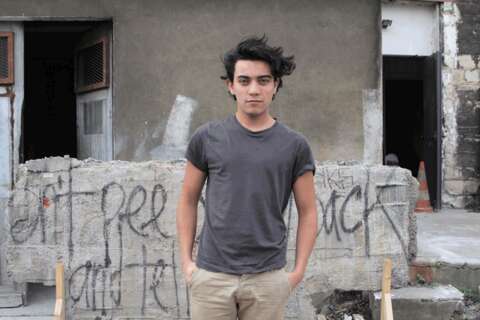 Top: Iván Argote "Strengthlessness" (2014) installed in the plaza of The Standard, High Line, photo by Guillaume Ziccarelli, courtesy the artist and Galerie Perrotin  Above: Portrait of Iván by Laetitia Striffling, courtesy the artist and Galerie Perrotin
If you live in a city with any history, it is no doubt littered with monuments—sculpted stones or cast bronzes meant to memorialize bravery, success, or tragedy. They are the physical manifestations of remembrance, and as such, acts of defiance, battling the tyrannical sands of time. It is, sadly, a losing battle. Eventually, the great and powerful man will end up as some random dude on a horse, a footnote in the urban landscape.

When artist Iván Argote moved to Paris on a free ticket he won in an art competition, he found these monuments perplexing. (Why is there an Egyptian obelisk in the Place de la Concorde?) After learning of their histories, they struck him as rather fucked up–for lack of a better phrase. He wanted others to take note, so he messed with them. Some might say he goes so far as to vandalize them, but more on that later. "It's a symbol of power, but it's an empty symbol."

Through manipulation, his sculpture and video works drum up uncomfortable symbolisms. He removes generals from their horses, puts ponchos on conquistadores, turns regal lions into playful kittens, and in "Strenghlessness" (now on display at The Standard, High Line), he’s taken the air (or blood, rather) out of Paris’ most ancient erection.

The story of the Luxor Obelisk begins in 1400 BCE in the town of Luxor, about 670 kilometers south of Cairo. The obelisks (originally a pair), which symbolized a petrified ray of light, stood sentinel outside the Luxor Temple. In 1833, as part of some political calculation, King Muhammed Ali, Khedive of Egypt, gifted the set to France. For either financial or engineering reasons, they could only send one, and it now stands in the center of Place de la Concorde on the exact spot where King Louis XVI and his German wife, among many others, lost everything from the neck up. Argote built a to-scale replica himself in his Paris studio. It is made out of concrete, wood, and gold leaf, and retains the exact dimensions of the original. What drew him to this particular monument actually had little to do with the bloody ground on which it stands. In 1845, Louis-Philippe I reciprocated Egypt’s diplomatic gesture by sending them a large copper clock, which today adorns the Saladin Citadel of Cairo. Pretty as it is, the clock was damaged on the voyage and never worked. Argote thought the gaffe was an all-too-perfect symbol for colonial relations—the “thank you” that inadvertently showed up as a “fuck you.”

"Strengthlessness" (whose symbolism is pretty straightforward) was first installed in the imperial city of Vienna in 2014, then shown at Galerie Perrotin in Paris, and now makes its American debut.

“It makes sense in America, but for different reasons,” Argote explained on a Skype call last March. “It’s a symbol of power, but it’s an empty symbol. It equals power and strength, but in a nonspecific way.” In the U.S., we only have one obelisk—one of any symbolic resonance, anyway—and it represents a cluster of governmental ideas: democracy, nationalism, President Washington, etc.

However, in light of the current elections, the sculpture delivers a payload of a topical immediacy. “The most powerful country in the world is going through this massive political crisis,” Argote commented about the U.S. election. “It’s really scary.” A sensitivity to governments and their symbols of power is a theme that shows up often in Argote’s work. Maybe because it’s part of his heritage. His parents were members of a leftist revolutionary group in Colombia in the late ’70s and early ’80s. They weren’t living in the jungle with rifles or anything—they were more intellectuals and sympathizers, preparing for a revolution that never came. Instead, the government reformed itself and created a new constitution. Argote’s father ended up being elected to the Senate.

Without getting into the complicated and tumultuous history of modern Colombia, it’s no great wonder that Argote’s work is somewhat preoccupied with authority. What’s interesting is that the authority he is concerned with is not necessarily governmental, but is often anthropological—bringing out our deepest, sometimes primal behaviors.

For example, in the performance piece "Altruism" (2011), Argote licks and kisses a subway pole on the Paris Métro. The other passengers in the car divert their gazes, uninterested or uncomfortable. “Why can’t this thing that everyone has touched be a wonderful thing, instead of an object of revulsion?” Argote asks. He wanted to demonstrate an act of pure love, and in doing so revealed how totally disgusted we are by each other. In "I Just Want to Give You Money" (2007), he tries to give away a quarter with no success.

In an untitled trio of films, he travels to New York, Paris, and Madrid to film people as they wait to cross the street. He yells out, “I love you!” and plays back their reactions in slow motion. “It was kind of a horror film in a way,” Argote explains. “I thought people would laugh a little, but most of the people were kind of mad. It was this fierce reaction. Almost animal.” By stepping just outside the lines of propriety, even when trying to communicate something positive, we see how rigid the borders of civility actually are.

In what might be his most notorious (and cheeky) act of defiance, he filmed himself spray painting over two Mondrians hanging in the Centre Pompidou. “It was something of a protest against the Western cannon’s exclusion of other cultures,” he explains. But why didn’t he go to jail? Because it was fake. He had a spray can, but he didn’t actually spray the paint. He added it later as a special effect, which was no small feat at the time. (It took him nearly a month to do, frame by painstaking frame.) However, no one actually asked if it was real or not, and the “vandalism” caused an outrage. The YouTube comments alone are a fascinating read.

It was yet another one of his button-pushing manipulations, casting something quotidian or seemingly inoffensive into a much harsher light by bending the viewer’s perception. His bent obelisk will be on display until November 8, 2016—Election Day in America and the Day of the Dead in Mexico. Lord help us.