We live in a world preoccupied – if not obsessed – with youth and beauty. Smooth, airbrushed faces saturate our visual world, fill our many screens and loom large over our highways. In Cuba, by contrast, the only faces one sees in large scale and affixed to buildings belong to leaders of the Communist party.

That was until artists JR and José Parlá came to town last year for the Havana Biennial and undertook an extraordinary collaboration, adorning the crinkly façades of Havana with its most elderly residents. Wrinkles of the City, Havana, Cuba – Standard Press’ latest release – documents the project, 25 murals in all, with essays, behind-the-scenes photos, and of course, the works themselves.

Since 2004, French artist JR has traveled the world flyposting colossal black-and-white portraits of ordinary citizens on the walls of buildings. In his murals, he links the memory of the elderly with the architecture of each city and its social history. American artist José Parlá, who is of Cuban descent, creates textural abstractions on canvas, reminiscent of Cuba’s deteriorated wall surfaces that speak to the very texture of cities and the lives lived within them.

25 of the Havana’s oldest citizens were cast, interviewed, photographed and transposed into outdoor murals, interlacing JR’s photos with Parla’s elegant, calligraphic abstractions. How exactly two such strong-willed, well-established artists joined their work so seamlessly, is a feat inspiring in and of itself. However, it is not so much about the collaboration as it is about the faces and the revolution their weathered faces so powerfully evoke. Curator, Janet Batet, writes in her essay:

"The city, once glamorous and renowned for its majestic architecture, is living through a sustained implosion that makes the city of Havana ruinous, demanding from passers-by a great deal of imagination to relieve its charms … The Wrinkles of The City forms part of it – an atypical project that bypasses the city's tourist arteries and chooses its inner streets to pay homage to those two excluded elements of today's Cuba: the elderly and the city itself."

And yet for all the rancor and controversy surrounding this chapter in Cuban history, these murals do not express despair or hatred. On the contrary, the subjects, with their eyes raised to the sky, or closed in peaceful repose, express a warmth and serenity, visual testaments to a joyful resolve that we all hope to achieve in our golden years. Elsa Dominguez Jiménez sums it up:

"I'm 75 years-old and I'm fit as a fiddle. I've gone out a lot and had lots of fun … I love my life. I watch soaps at home on TV. I read novels. I like cooking … I love dancing. I have a lot of fun at parties and I drink lots of beer.”

Now, speaking of fun and parties, we’re celebrating the launch of the book at Art Basel Miami Beach this December. Last year, to celebrate the launch of Dzine's Nailed, we created a little pop-up nail salon at The Standard, Miami. This year, José is opening up a pop-up Cuban café called Cafécito Neptuno, serving up authentic cuban fare. The best part, during Art Basel Miami Beach, it will remain open 24 hours.

Where can I buy the book?

JR & José Parlá: Wrinkles of the City, Havana, Cuba will be available exclusively through The Standard Shop and shopthestandard.com until February 1, 2013 and distributed in North America by ARTBOOK D.A.P. thereafter.

Also over Basel, we'll be screening a twenty-six minute documentary produced by Social Animals and Parlá Studios. The film will officially premiere in 2013.

More About the Artists:

JR was born in France in 1983 and currently works in Paris and New York. He exhibits freely in public sites in cities around world. His work mixes Art and Act, talks about commitment, freedom, identity and limit. JR’s work has been exhibited around the world in cities such as Paris (Centre Pompidou, Perrotin Gallery), Amsterdam (Foam Museum), London (Tate Modern), Miami (Art Basel Miami), Los Angeles (MOCA), Shanghai or Hong-Kong. His projects include Portraits of a Generation (2004-2006), Face2Face (2007), Women Are Heroes (2008-2011) and UNFRAMED (launched in 2010). In 2011, he was awarded the TED Prize and created the global and participatory INSIDE OUT project.

José Parlá was born in the United States in 1973 and currently lives and works in Brooklyn. Parlá’s work records his observations of the streets of cities around the world, collecting posters, taking photographs and writings on the wall, turning them into visual diaries he calls cityscapes. Consisting of memories written in calligraphic script layered on fragments of expressionistic and reconstructed city walls, his paintings capture bits and pieces of his encounters. Parlá's works have appeared in major exhibitions in London, New York, (Bryce Wolkowitz), Los Angeles, (OHWOW) Tokyo, Hong Kong and Paris. His latest projects include a 70-foot-long painting at the Barclays Center, home of the NBA’s Brooklyn Nets, a mural painting commissioned by the Brooklyn Academy of Music for the new BAM FISHER Theatre in Brooklyn, the Parlá Frères exhibition with his brother Rey Parlá at the renowned COLETTE in Paris, and an exhibition at SCAD MUSEUM in Savannah, Georgia with fellow alumni Wendy White entitled Performing Painting. Parlá’s 2013 upcoming solo exhibition will be held in the London’s Haunch of Venison gallery. 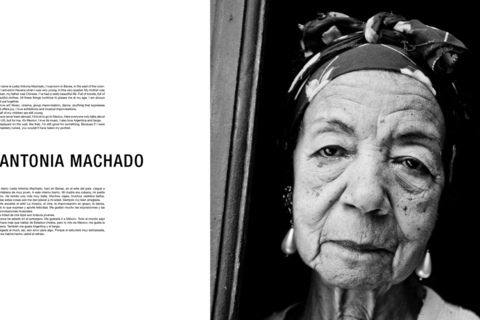 JR Speaks About His Work and Career