After Frieze partnerships in New York and Los Angeles, it was only organic that the Standard, London’s cultural team would grow the relationship with the art fair. We created a place and programming for its global community to take some time from the tents — and for themselves.

Our VIP lounge hosted The Standard, London: Hussein Chalayan in conversation, celebrating the multifaceted creative’s 25th anniversary. Moderated by Lucy Kamara MooreIt in The Standard, London Library & Auditorium space, the talk brought together —and blurred the lines— between fashion and art in a way only Chalayan and The Standard can. It was not that long ago that the relationship between the art and fashion worlds was a bit of a high-low outfit. How the #ootd can change, particularly as technology and pop culture commodify creativity into ‘just another luxury purchase’.

Few in London have been as observant (and complicit) in this convergence of culture and commercialism quite like Chalayan. In 2019, he celebrated his eponymous brand’s 25th anniversary. He has won the British Fashion Designer of the Year title twice — though it’s a stitch reductive to call him just a fashion designer.

Vogue described him as “fashion’s big thinker”; his (art)work incorporates science, technology, anthropology and performance ritual — but most focally the form and movement of the human body. He has been a professor, a sculptor and a video artist, and has been exhibited in London, New York, Paris, Istanbul and Tokyo.

"I feel like the best designers have a worldview. They're not just interested in fashion. They have a particular opinion on space, on food, on lifestyle." - Hussein Chalayan

“I feel like the best designers have a worldview. They're not just interested in fashion. They have a particular opinion on space, on food, on lifestyle. They gravitate towards certain places for holidays even … And if you do have a broader world view, I think you'd be a better designer because you would be able to see the image of the body in a broader context,” he told Moorelt and the audience.

Born to a Turkish family in Cyprus, his family emigrated to England in 1978. He recounts how his parents wanted him to be an architect since he could draw. Instead, he went to Central Saint Martins.

Long before the fashion elite rubbed ruffles on the tenth floor of The Standard, London, they were drinking pints of cheap lager at Dave’s Bar near CSM’s former Charing Cross campus. Chalayan reminisces about how creatives from across departments would meet, play snooker and even fall in love — he compares it to the art school in the American musical Fame. Oh, the FOMO. 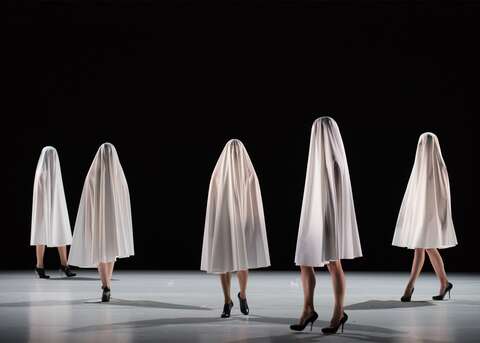 When he graduated in 1993, he burst onto the scene at London Fashion Week alongside fellow wunderkind —and Lady Gaga collaborator, if that matters— Alexander McQueen. The pre-digital, still-nepotistic editorial world of the time labelled him an avant-garde designer.

He recalls, “[With digital], people don't look at your work through the selection of an editor because when it was non-digital, we relied on how —and who— you knew to see what was chosen to be published. In my case, it was always my showpieces.”

Today, he has gone on to achieve the near impossible in fashion: longevity. (Oh yes, and he’s received an MBE too.) Looking forward, he forecasts fashion will continue to be less seasonal and more digital.

“I think it's getting to a stage where it's not even about wearing the clothes — it's about the image of the body in the digital representations of the clothes." - Hussein Chalayan

“I think it's getting to a stage where it's not even about wearing the clothes — it's about the image of the body in the digital representations of the clothes. There's all kinds of things going on that that in itself is going to become a market. It's going to be crazy. That's going to be a market; you'd be able to sell clothes digitally,” he predicts.

The most forward-thinking consumers have already begun having themselves edited into photo-realistic outfits that fall somewhere between Balenciaga and Black Mirror. These haute-tech looks are not only for the ‘grams, but also the greater good — offering a sustainable alternative and solution to fashion’s environmental impact.

These are the conversations that will shape the industry for the next 25 years. Unsurprisingly, having intuitively spotted this convergence of fashion, technology and digital art, Chalayan is once again ahead of the trend.