A man in Clueless once said, “Everywhere in LA takes 20 minutes.” He was wrong, so wrong. Try an hour. Lucky for us, one of our favorite neighborhoods, Chinatown, is an actual 8-minute ride down North Figueroa Street from The Standard, Downtown LA. The historic neighborhood is three parts kitsch and traditional and two parts experimental. New foodie hot spots that reimagine how we taste old school genres pop up almost monthly, and the nightlife spots are a mix of cash-only dives and fancier lounges with extensive craft beer menus. This balance of high and low is a rare commodity among LA neighborhoods these days, and we’re grateful to have it down the street. Read on and let us guide you through our favorite restaurants, bars, shops, and parks. Make a game plan and come early. The Nashville-style fried chicken joint’s line will have you wondering why Los Angeles has any known tie to its vegan/gluten-free reputation. If you can handle the heat, we suggest going mild. The howling reference in the name is in regards to the southern spices and their ample ability to boost your endorphins. Note: Their chicken and waffles are only available on the weekends. 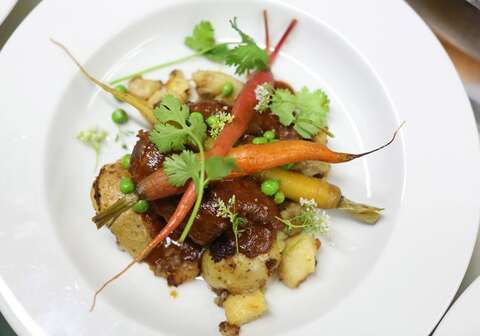 It was not easy to find a decent Pinoy (traditional or modern) spot around the city, but then came LASA. The concept is simple: Filipino food with a focus on modernizing the classics and basing their menu on seasonal offerings. Grab a lunch order to go through their take-out window or call and make a reservation for dinner if you want to start your evening in an atmosphere best described as warm, charming, and never quaint. 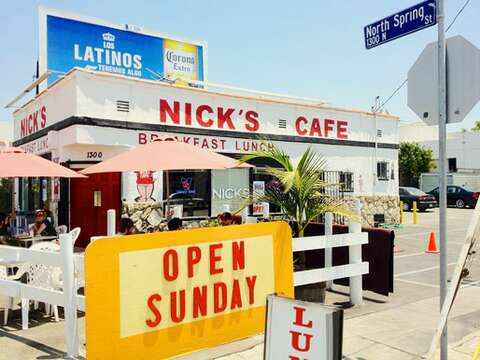 The praises of every seasoned Angeleno ring true when it comes to this cash-only diner across from LA State Historic Park. The classic red and white scheme, an inside wrap-around bar, and select outdoor seating means you’ve got the right place. The biggest trouble once you’ve found it will be deciding what you’re going to order. Embrace the no frills and let your slightly hungover heart guide your way. Might we suggest the top-notch buttermilk pancakes? Roy Choi is essentially a food buzzword in this city, but once you’ve had the chance to devour one of his bowls at Chego, you feel much less harped on by his presence in every neighborhood’s eatery evolution. We’re talking kimchi, pork belly, and tofu that could convert a meat lover to the greener side. They’re not exactly light on portions, so come hungry. Fred Guerrero, a co-conspirator of the recently vacationed Slow Culture art gallery, opened a window service burger joint with a menu as simple as it gets. But again, this is modern Los Angeles, so those scant options include a veggie burger that beats out most (likely due to the founder’s aversion to meat). Get fries and a Mexican Coke, and watch all the skateboarders cruising up to get their fix. Neighborhood mainstays with a long tie to the community need more than just love—they need lifetime achievement awards. Give that and a whole lot more to Won Kok for being a casual spot you can get the dim sum and steamed buns of your dreams for a price that might have you coming back on a regular basis. Think a cinematic dive bar complete with red lit interiors, old-school tables, a jukebox with everything from Drake to Stevie Wonder, a seemingly never-ending supply of Tsingtao, and a crowd of artsy people. There is a small dance floor that, once utilized by one patron, creates a chain effect as the night goes on. The bar is serviced by one man (two if you’re lucky) so either come a little buzzed or bring someone you like chatting with for the waiting period. 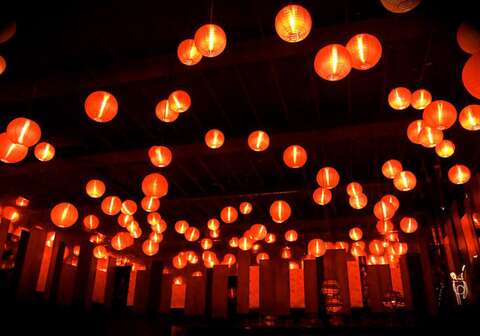 That endless list of beers we mentioned earlier? That was a reference to this spot, located across from the Central Plaza and decorated with traditional lanterns all along the ceiling. Some nights are relaxed and ideal for a catch up conversation with an old friend. Others supply you with ample time to muster the courage for karaoke. We like a place that lets you pick your poison. General Lee’s promises two dance floors with very different music stylings on any given eve and a fully stocked bars for both. You can float between the two to see which mood fits you best, but we’ve always gravitated toward the upstairs lounge with two top tables, a set of couches, and dimly lit lamps. Technically placed in the Highland Park territory, Footsies is just a few blocks away in a bit of middle ground called Lincoln Heights that gets left off most LA destination mentions. What you’ll find at this bar is beautiful Mexican paintings of topless ladies, '60s and '70s style records spun by DJs on most evenings, and a large back patio that lets you enjoy our perennial good weather. Think contemporary craft and design when it comes to this shop-within-a-gallery space. Curating conceptual jewelry, abstract home goods, and out of the box table settings, it’s the ideal spot to pick up something you can take home that isn’t going to be in anyone else’s suitcase. One of the first art collectives to move into Chinatown’s traditional walk-ups, Ooga Booga publishes zines and art books in support of local talent that need a medium. Now hosting a large gallery space not too far off, they keep the OG spot as a bookstore with odds and ends, worth getting lost in for a couple hours. This shoe treasure trove appeals most to the ladies. Founded by atelier Ty McBride a couple years ago, the distinct brand of trend-focused footwear gained buzz for its unique details and perfectly placed price ranges. Found in the coolest retailers across NYC and LA, McBride opened up his own shop a year ago to touch base with his LA roots. If you’re a woman in need of new kicks, look no further. 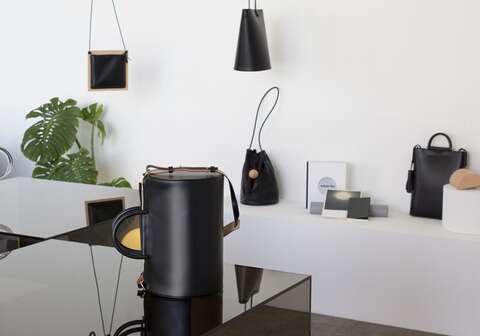 Conceptually designed with a Japanese minimalist ethos, Building Block is a bag line that goes beyond the conventional idea of a purse or backpack. Working with linear metal pieces and wooden block additives, the results are super luxe carry alls with statements made perfectly for those who like to keep their wardrobe paired back at all times. IKO IKO is the place to find all your independently published reads, Swedish-designed host gifts, and clothing Rei Kawakubo would be stoked on. They’re heavy on supporting up-and-coming LA designers as well as veering away from any norm when it comes to what materials and silhouettes are considered wearable. You’ll see it here first. 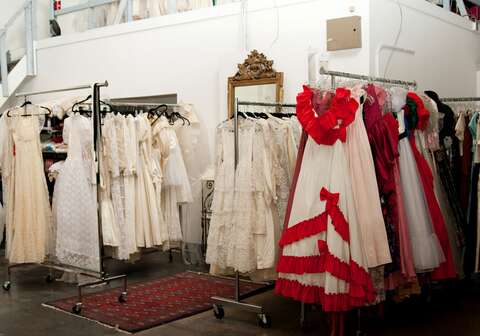 Shareen Vintage is no secret to the vintage lovers that dwell in this city, but you wouldn’t stumble upon it if you weren’t looking. You’ll find this giant warehouse of curated frocks (organized by time period, of course) located on the backside of a stretch of warehouses at the tip of LA Historic Park. It’s known for its insanely good edit that will take you quite a while to peruse, so we recommend that you wear walking shoes. (Insider Note: the adjoining buildings have been used as music studios for big time musicians, artist studio spaces, and pop-up galleries from time to time.) Founded by a community of young entrepreneurs with a creative bent, Nous Tous is part gallery, part event space. Whether you’re into guided yoga without the Classpass vibes or a conversation about pushing the limits with your creative work, they attempt to curate something for the broader community. Located at the foot of the Chinatown hill, LA State Historic Park has gone through some changes. Its lush greenery became more of a large dirt running track thanks to FYF festival goers, but thanks to new initiatives that moved the festival south of Downtown as well as a pricey facelift, the rebuilt and recently reopened space serves as a proper spot for weekend lounging and long walks around it’s mile circumference. The destination for a few of the places mentioned above, Central Plaza, gives great face for your photography moments thanks to its classic architectural references from the East. Besides hosting a slew of traditional vendors as well as new shops and eateries, it’s one of the only spots in LA where you could spend the whole evening in four to five places and never need an Uber. In this city, we call that “the dream.”