It was just about a year ago that we happened upon a rather striking monograph on one of our favorite artists, Erin Wurm. The cover features a bulging, three-dimensional, 8-inch pickle, which, as it would turn out, became quite the fortuitous fruit. Over the next few months, Wurm and The Standard set forth on a collaboration unlike any we have done before. First, we commissioned a sculpture — a super-sized version of his Kastenmann series – to be placed in the plaza at The Standard, High Line. Next — and here's where we raised a few eyebrows — we selected a series of images from his archives to fill our advertising space. As this is the first time we have aligned ourselves so intimately with the work of one particular artist, we thought it would be worth a closer examination into the ironic, surreal, inappropriate, hilarious, beautiful world of Erwin Wurm.

I. No Laughing Matter

And so it began with a pickle, specifically Wurm's sculpture series “Selbstportrait als Gurkens” aka “Self-Portrait of a Cucumber,” which features pickles of all shapes and sizes — short, fat, stubby and curved – each one set triumphantly upon a pedestal. If you're wondering, the cucumber isn’t the only suggestively shaped piece of produce to appear in Wurm’s twenty-year, internationally acclaimed body of work. The banana makes a number of interesting cameos, as do oranges, bagels, apples, and one potentially violated bread roll (by a nun’s fingers, no less).

Leave it to Wurm to provoke us with fruit. His work often revels in it's borderline — some might say over-the-line offensiveness – layered always with a thick icing of wit. If being a great artist requires establishing your own aesthetic and conceptual village, then Wurm is the undisputed mayor of his, which is located directly at the intersection of Sublime, Ridiculous, Sacred, and Profane.

If Woody Allen (another cultural mixologist of elegance and humor) was a sculptor instead of a filmmaker, one could imagine his work looking something like Wurm’s. But make no mistake. Erwin is no comedian. “No no, I’m not making jokes, not at all. I just take another perspective on our daily lives or on our reality,” he explained to us over the phone from his home in Vienna. He cites his famous “Fat Car” Series from 2003, which are to-scale sculptures of sports cars that appear to have been filled with milkshakes instead of gasoline. “Everybody who comes to see the fat car starts to laugh, but it’s not funny. It’s not meant to be funny. It’s just a fat car with an enormous obesity problem and this relates back to our society.”

But relates back to our society how? Stephan Berg in his essay, "The Ridiculous Human Tragedy," elaborates: "The layers with which he surrounds the body, both metaphorically and literally, by the extensive fattening-up or thinning-down of people and things, are, like his softened architecture, sculptural metaphors for an existential insecurity about the boundaries of the self, about the question of the relationship between inner and outer..." This is to say, he plays with the forms of people, places and things. He lends them a perspective, a warped reflection, one you might find in a funhouse mirror.

Which brings us to "Big Kastenmann", who currently stands guard over the plaza in front of The Standard, High Line, the building itself another big box with legs. Wurm sees them as more than just visually analogous. “Every living creature has a skin, more or less, and the skin defines the form of the body,” he explains. “Clothing is the second skin. The clothes define the form of our body and the house could be considered the third skin, another layer that protects us as well as reflects moments of the personality ... And of course the hotel is a living space as well. It’s a short-term living space, but a living space nonetheless.” Skin creates form. Form becomes structure. Structure becomes style.

III. Regarding a Certain Rug

There's a little bit of confusion regarding our new ad "campaign" because, it's not a campaign, at least not in the traditional sense. Instead of commissioning something new, we elected instead to raid his archives and what we came up with are images from two series: “Instructions on how to be politically incorrect” (2002/03) and “One-Minute Sculptures” (1997). For whatever reason, they spoke to us. Erwin simply, "embodies the spirit of the brand,” as André explained in The New York Times last month.

That said, we didn't want to just plop our logo on his work and call it "Wurm for The Standard". We wanted these ads to function more as a kind of gallery space, a way to extend art into the realm of the printed publication. “It reaches more people,” Wurm said about art interjected into commercial mass media, or as he calls it, "the modern public space." (Something he knows all about from his 44 Suggestions: A Social Sculpture 2008, a series of extremely politically incorrect statements printed in the German newspaper Die Zeit) “People who are not part of the art world are invited to look at it, discuss it, ask questions about it. Maybe they hate it or maybe they love it.” You can tally us in the "love it" column.

To learn more about Erwin Wurm, his work and his future exhibitions head to the Lehmann Maupin Gallery. Big Kastenmann is on display until November 2nd. 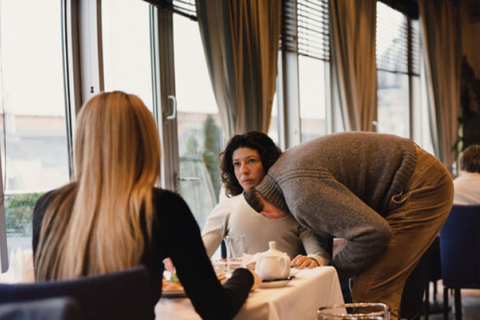 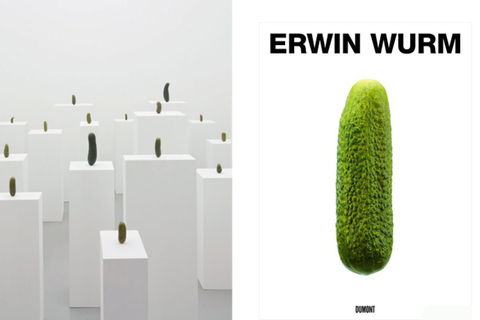 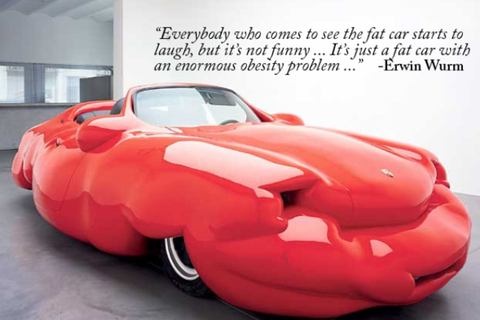