On Wednesday, February 16th, Le Bain celebrates New York Fashion Week with its second Dance Dance Dance Ball, featuring some of the greatest talents of the city's ballroom scene. We took the opportunity to chat about the state of Ballroom culture with two sponsors of the night: Yohon Tatum of The Center and Antaeuz of Haus of Us. All photos by Elena Bulet.

THE STANDARD: How would you describe the state of ballroom culture in 2022, locally in New York, and globally as a culture around the world?

ANTAEUZ: As an amazing time to be in! With the vast exposure, services and inspiration that it is leaving today's youth fearless to be themselves and to have a voice, I give it 10s across the board!

YOHON: Locally and globally ballroom in its current state is one of the fastest growing sub cultures in the world. With the popularity it has gained in media and television and new houses emerging in the scene to compete, Ballroom is very much alive and thriving!

Yohon, could you tell us more about how ballroom culture is part of The Center’s action and what it means to it?

Antaeuz, You co-run Haus of Us, which is dedicated to the new generation of voguers. What does the youngest generation  bring to the game and to the community?

ANTAEUZ: Yes we are dedicated, Haus of Us is led and conceived by Zenith Juicy Labeija to celebrate the Kiki Ballroom culture with his peers and as well to offer Ballroom experiences and workshops for the community between the ages of 12-24. As I have witnessed their dedication, time and drive in creating, performing and producing. They have become the role models that their generation and community relates to and welcomes. I mean... also their voguing style has evolved into such an amazing athletic/creative way of expression that no shade my generation was not doing! [Laughs] Header photo: Icon Leyomi Amazon. Photo 1: Sevn Versace Basquiat. Photo 2: Legendary Gillette Oricci. Photo 3: Icon Giselle Xtravaganza
"No matter what generation of ballroom you are from, the opportunity to be at the top of The Standard High Line overlooking the city and being at a ball is inspiring."–Yohon

Does it resonate to have a ball celebration high in a sky above the Meatpacking district, which is a bedrock of NY Queer History?

YOHON: Oh yes it resonates, and I think that may show up differently for different generations of ballroom and queer culture. It resonates differently to a generation that’s old enough to remember voguing on the piers until sunrise or popping out at the exclusive alternative nightlife spots in meatpacking. Whereas for this current generation that may feel as if previously they’ve been denied access to the newly renovated, upscale Meatpacking District. For them this experience could feel inclusive, empowering and progressive. No matter what generation of ballroom you are from, the opportunity to be at the top of the Standard High Line in Le Bain overlooking the city and being at a ball is inspiring. For me it inspires me to partner with more local businesses to create even more safe spaces to allow the ballroom community to build, love and protect one another.

ANTAEUZ: High in the sky is correct! Because right here at Le Bain last June Madonna hosted a PRIDE auction event in which we were blessed to have been rewarded from. Her support through her own Ray Of Light Foundation and Universal Music Group has boosted our mission which is to continue to create more safe space experiences for LGBTQ youth and continued community programming like the Dance Dance Dance Ball. Being in the Meatpacking district is very inspiring alongside its history that the piers have had on the LGBTQ community in NYC.  As well to also have been a part of last summer's teen night series at the new Little Island and co-curate three Kiki Ball experiences for youth. And yes, we are inspired, powering events like The Dance Dance Dance Ball is what Haus Of Us advocates for. We wish to leave our own mark in the community, and like you said... in the Bedrock, one stone at a time, where it all began. Look out for our Kiki Ice skating night coming this March! 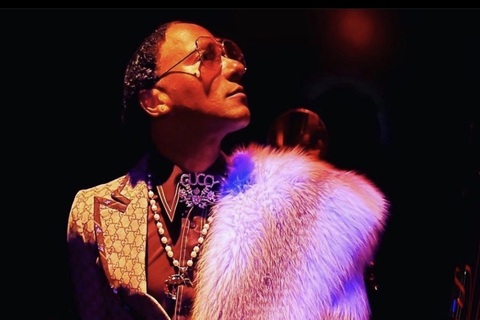