Bassem Youssef, an Egyptian heart surgeon, started making satirical YouTube videos in his laundry room in 2011 as a response to the Egyptian revolution. Two years later, Time magazine named him as one of their “100 most influential people in the world.” The next year, he fled the country after the government falsely accused him of “circulating false news.”

As the host of Al Bernameg (The Show) from 2011 to 2013, Youssef became known as “Egypt’s Jon Stewart” for similarly using satire as a weapon to call out the hypocrisy he saw in the Egyptian government during the revolution. At its peak, the show saw a combined 184 million viewers on TV and online. Jon Stewart even appeared on it. He was the most famous man in Egypt, that is until the government silenced him. Soon after Youssef was forced to end the show, a court issued him a penalty of $10 million dollars for his subversive material. Youssef and his family fled to the U.S., eventually settling in LA.

Any of this have a tinge of familiarity? Fake news is straight out of the Egyptian handbook. Lucky for us, we have the chance to learn from him. Youssef recently published a memoir, Revolution for Dummies: Laughing Through the Arab Spring, and a recent documentary, Tickling Giants, also charts his trajectory. FilmAid, an organization devoted to helping refugees tell their stories and advocate for their communities, honored Youssef with its 2017 Community Leadership Award during a reception at Top of The Standard.

We sat down with Youssef to talk a bit about the wild ride. 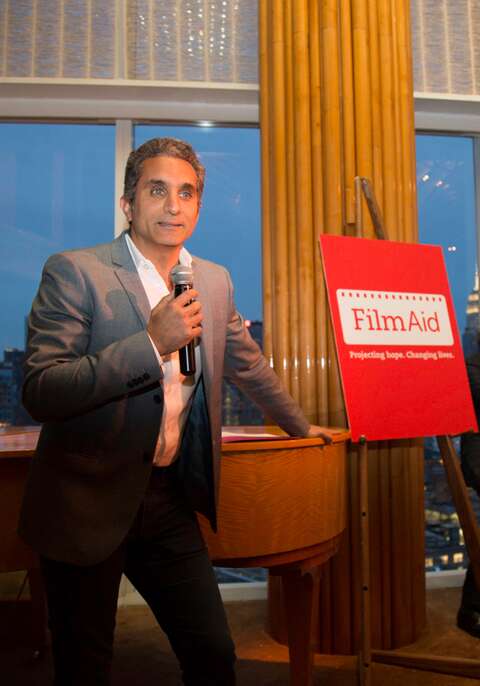 THE STANDARD: You’re called the "Jon Stewart of Egypt," although the two of you catered to very different audiences. Do you see any differences in the humor?
BASSEM YOUSSEF: The humor is the same but the context is always different. I always say that humor is a third language. The stakes might be a little bit higher back in Egypt. Satire is the same everywhere. Sarcasm is known as the offending art. You offend people. It is even better when you offend people in power. But the context, language, and references are different. I find it very difficult to explain humor to someone who doesn’t speak the language, who doesn’t know the culture. Egyptians are known to be very satirical people. After the revolution was the first time there was a window of opportunity to actually satirize authority.

What are Americans’ biggest misconceptions about what’s going on in Egypt?
I think the biggest misconception politically is that many people, and I’m not talking about just normal people, but I’m talking about politicians, think that a military dictatorship is better than taking a chance on democracy or it’s better than having a religious regime. Both of them are just as bad. One of them leads to the other. And stability doesn’t necessarily mean that things are going well. It’s stable because you don’t hear anything because other people can’t speak up. That’s the whole thing. People think that because there’s not a lot of news coming up from Egypt, everything is fine. It’s not.

And you write about American aid and how you think we’re also doing a lot of the wrong things in Egypt.
Well, I think American aid is an issue. It’s not just with Egypt. I think there’s this history of the American administration buying the loyalty of certain governments, no matter if the government is democratic or not. And I think it empowers them and it’s counterproductive.

And you also write that our relationship with Israel makes any involvement in Egypt and the Middle East more complicated.
Yeah, of course. Because the American administration wants the safety of Israel, which is understandable, but there is a lot of injustice happening there, too. We have to admit that. I mean, there’s a lot just happening in the occupied territories. And the paradox that we have with Israel is that the Egyptian government accuses everybody who speaks against it as an operative aid by the Mossad [intelligence agency] in Israel, and at the same time they are in bed with the Mossad in Israel. So, this blows up my mind. I mean, man up, you know?

"Those people will be delusional. They choose ideology above truth and fact."

Do you feel like anyone’s taken the baton from you in Egypt?
No. And it’s not because they’re not good enough. The people there are wonderful and they are very talented, but it’s not allowed.

At the end of the documentary about your story, Tickling Giants, it looks like most of the people who worked on your show continued to work in the industry.
They continue, but the only comedy that’s allowed is social satire. Social comedy. Nothing is allowed to be political. They make fun of mundane daily stuff. Traffic. Relationships. Daily stuff people go through. Bureaucracy. Corporate stuff. Very vanilla.

Do you think that helps at all?
No. It’s a distraction. It’s like a lot of money that is spent just for distraction.

Maybe I’m wrong about this, but I feel like Egyptians seem more aware of what’s going on in their country than a lot of Americans do in ours.
No. This is another misconception. Because usually the people that you speak to from Egypt know the language, and are people who travel and are well-read. I know this is a running joke that Americans don’t have any idea about what’s happening in the world, but if you want to compare, compare an everyday guy here with an everyday guy there. I’m sure if you speak to someone from New York who goes to Columbia or NYU, it will be different from someone who works in slaughterhouse in the Midwest. At the same time, if you speak to someone like me or a journalist from Egypt, it’ll be different from someone who drives a taxi in Egypt. It’s the same.

Fake news seems like a page out of the Egyptian handbook.
Absolutely. We were there before you. All the stuff about like Obama being part of the Muslim Brotherhood, founder of ISIS, everything. We had that before you guys.

Is it here to stay?
Yeah, of course. And the question that’s usually asked is about how you reach those people… you don’t. Those people will be delusional. They choose ideology above truth and fact.

What changes have you seen in the Egyptian media since you’ve been in the U.S.? Do you think it’s status quo?
North Korea. It’s an authoritarian media. If there’s some sort of dissent or opposition, it’s designed to be decorative. It’s a show. It’s not real.

Any major plans while you’re in New York?
I might go to a musical. I like to walk around the High Line. I’m also juicing right now.

Juicing, you say?
I juice from time to time to detox my body. This is my second day. But I sometimes I go up to nine, ten days. I’m vegan. I do a lot of intermittent fasting. Your first meal is at twelve, your last meal is at eight. You eat for eight hours. You fast for sixteen hours, including your sleep. It’s very easy. It’s protective for your brain. That whole “breakfast is the most important part of...” is bullshit. Your body is designed to eat less. You’re much stronger, your immunity is much better. You sleep much better. I hardly ever get sick. But if I do, I fast. This is the best thing you can do.

So, is health guru the next frontier?
It’s actually one of my projects. I want to do a digital show about this.