Austin Tirado and Michael Lee met two years ago when their then separate bands were playing a show together. Soon after, those two bands merged to become a new band, Le Sands. Sometime after that (in January of 2013) the group of four became two. ii was born. The 25-year-old Cali boys are doing quite well so far. One of their songs was featured on the TV show "House Of Lies" and they composed the score for the documentary "Little Hope Was Arson," – and this before they've completed their first album. Oh and they were also selected in the Warby Parker x Standard Sounds Artist-in-Residence Program by mega film music supervisor Randall Poster. We got Austin on the phone to answer a few quick questions...

STANDARD CULTURE: Which is harder to do: writing for yourself or composing for someone else?
Austin: Definitely writing for our own thing. There isn't a director telling you how he wants it. You have to be really strong about representing and refining the band. Plus, I'm never really satisfied as an artist.

What are your style inspirations and what do you like to wear?
We like basketball a lot and grew up on 90s Nike. I like to wear anything that makes me look better than I actually am. Lots of black and white and leather.

If you could go on a designer spending spree where would you go?
Raf Simmons for sure! Some Margiela shoes would be nice, and then I'd find some cool vintage YSL. Comme de Garcons is hot, too.

What music are you currently obsessed with?
We love everything from M.J., Prince, Marvin Gaye, to the composer Micheal Andrews to Timberland and Ginuwine.

What does 'ii' stand for?
It represents to individuals. We liked the way it looked visually. It's minimal, simple, and looks cool in black and white.

About the Residency:
Legendary film music supervisor Randall Poster (who soundtracked, just to name a few, Kids, Rushmore, Velvet Goldmine, 200 Cigarettes, The Thomas Crowne Affair, Boys Don’t Cry, Zoolander, The Royal Tenenbaums, Somethings Gotta Give, The Aviator, The Squid and the Whale, Lost, The Darjeeling Limited, The Hangover, Moonrise Kingdom, Boardwalk Empire, Spring Breakers, and Skyfall) and the mastermind behind Standard Sounds in the East Village, Annie Ohayon, have selected six artists to spend a week at each of the properties and compose two original songs a piece. The artists, whose work will be packaged in a limited-edition LP just in time for Xmas, include Sophie Auster, Nikki Lane, Teddy Thompson, Cillie Barnes, Goldspot’s Sid Kholsa, and one other, very special surprise.

On all things Warby Parker x The Standard 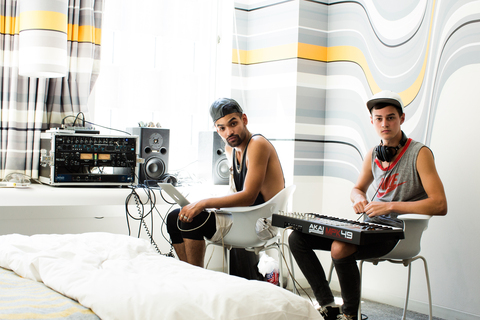