March 7th is a double feature in The Penthouse at The Standard, East Village. We're lucky to have not one but two performers at Annie O's Music Series: Molly Payton, a New Zealand-born singer/songwriter, and Brooklyn's own indie pop songstress, Monica Riskey. Annie O dished with both singers leading up to their New York City debuts. Tell us about your new single and video, “No One Else." Why is this the title?
"No One Else" is the most personal song on the EP. The title is a bit misleading in the sense that it implies the song is about this person being the only one for me, when really it’s closer to the opposite. It’s part of the line at the end of the song: “If there was no one else around, I’d be the one for you." The song is kind of saying that I cared about this person, but I’d accepted that the relationship had past its expiry date.
Is this your first EP? Where did you record and produce it?
It is! I recorded the EP in London in 2018 with my friend Oscar Lang producing it. We did every song in a different studio because it was really early on in terms of all this music stuff [for me].
When did you move to London from New Zealand?
The beginning of 2018, when I was 16.

Who are some of your musical influences?
I love the voices and lyrics of classic songwriters like Joni Mitchell, Leonard Cohen, Bob Dylan, and Johnny Cash, but I’m equally into the alternative rock sounds of the 90s, like Pavement and Nirvana. The latter becomes more part of my sound in my second EP. I’m also a huge Elton John nut.

What can we expect from your show at The Standard, East Village?
I'm playing on my own for this show, no band, just me and my guitar. I’m playing all the songs stripped down to the way I originally wrote them. It’s gonna be a lovely time, folks. 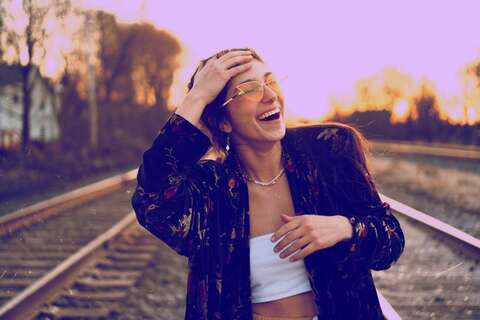 What was it like growing up in Brooklyn?
Growing up in Brighton Beach made me feel entirely in a different world (laughs). Otherwise, I guess attitude and skills for how to navigate public transportation.
How did you juggle a neuroscience degree and a music career?
Well to be fair, I didn't fully pursue a music career, but rather treated it like a side hustle. I would grind out my science classes and then finish up each study session by freestyling to instrumentals off YouTube.
Now as a graduate, what do you hope to accomplish?
I hope to dive in to music and give it 100, instead of dipping my toes in the water.
When did you realize you should pursue a career as a musician full time?
It was the day I was supposed to leave to take a physics class during the summer at my university, when I got food with my dad and had a serious heart-to-heart with him. After explaining to him how reluctant I am to make the three and a half hour drive, he told me I was wasting my time not giving 100 percent to one thing, which hit me like cold water in the best way.

What can we expect from your show at The Standard, East Village?
Get ready for some intimate, cute vibes. I'm bringing back some of my OG songs, which I used to perform all over my college. I'm excited to keep much of the performance bare and have a dope night with everyone.