On Friday, January 6th, Annie O's bringing the Minnesota-based Americana group of Rogue Valley to the Penthouse for an intimate performance. Labeled by Paste as “one of Minnesota’s best bands,” they’re garnering a lot of attention on the indie scene. Before the show, Annie connected with lead singer Chris Koza to talk about the band’s new album, their inspirations, and what to expect on the big night.


ANNIE O: Tell us about the process of making the new album, Radiate/Dissolve.
CHRIS KOZA: The process took a lot longer than our previous albums, in part because everyone in the band has other projects that crop up from time to time, but also because after recording four albums in one year, we didn't want to rush it. If anything, we let it simmer for a long time. Crock Pot cooking is the Minnesota way, after all.

The sounds on this album are so dreamy and transporting. What were some of your influences this time around?
When I was initially writing the songs, I wanted to be in the Southwest. I wanted to introduce surf and sand into our soundscape. When we starting building the production around the materials, Luke Anderson [drummer] brought some samples and other textural elements into the sessions and we played around with those for months. It's easy to get carried away!

You have recorded many studio albums. Did you do anything different this time around in regards to approach?
Every recording of an album opens up opportunities to try things that were discovered the last time around. This time around, we tried working at different studios with different sound and mix engineers. We worked horns into the songs and took a deeply democratic approach to our mix notes and overall aesthetic. We looked hard at the beginnings and endings of songs and how one flows into the next. I think because this album took so much longer to complete, we had more time to live with the material before signing off on the finished production.

What is the Rogue Valley? Is it place that really exists?
[Laugh.] Yes, it is a real place. Not a place any of us have spent a lot of time, but we've driven through on tour. I'm an Oregonian, and growing up, my family took some trips to Rogue Valley in Southern Oregon. We visited Crater Lake and that made a lasting impression on me. It's so beautiful, serene, and inspiring.

You're based in Minneapolis. What should New Yorkers check out when they head over there?
Well, I'm biased, but we've got some pretty good restaurants in Minneapolis, from casual faire to fine dining. Also an explosion of microbreweries has occurred over the last couple of years, so there are a lot of flavors to try. If you come in the winter, you have to go ice skating at one of the many warming houses along the lakes. See a show at First Avenue or Icehouse and marvel in the open spaces!

Are there any specific tracks by other artists you currently have on repeat?
I was stuck on a song from Sara Watkins' latest solo album called "Without a Word." Then there's the Arrival film soundtrack; it's spooky, but I love it. I still dig Daft Punk's "Lose Yourself to Dance," and if I'm at the gym, I might put on STRFKR's latest “Being No One, Going Nowhere” to get my sweat on.

If Rogue Valley had a superpower, what would it be?
Invisibility. I think we might already have it!

Have you toured in New York a lot? What's your favorite thing about playing here or about the city in general?
I love playing in New York because the sound is almost always great at every venue we've played at. It's been awhile since Rogue Valley has been out there, thought I've done a handful of solo shows and shows with other projects. I love the energy of the city. I love going out after a show and meeting friends. And since we don't get out there all that often, and it might be a little lame, but I really like taking the subway.

What can we expect from your show at The Annie O Music Series?
We'll perform songs from our older albums and Radiate/Dissolve. We've got some SPDS samples, so we can blend some of the textures of the recording with our live energy. We want to bring the hot and cold alike.

What's next for you?
We've got a couple of shows in NYC, then a performance later in January at a really cool venue in the Twin Cities called the Hopkins Center for the Arts. We'll have our brass players there for that show along with some extra staging elements. After that, I'm sure we'll do more shows around the Midwest throughout the spring and summer, and hopefully get back out to both coasts before the end of the year. I've got some new songs I think could be right for Rogue Valley that I've been tinkering with, so I think I'll keep exploring that world and see where the stories lead. 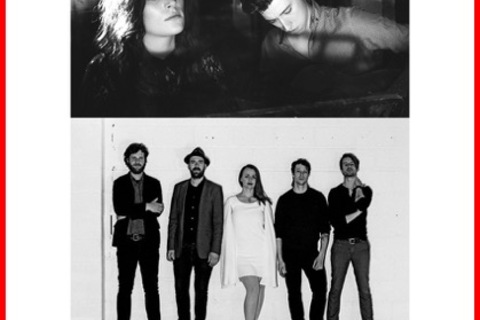