On Monday, February 27th, Annie O brings one-man band John the Baptist to the Penthouse for an intimate performance. His sound's been described as "melody-driven, psyched-out surf rock," with heavy influences drawn from boom-bap hip hop groups such as A Tribe Called Quest. With his new EP, Many Moods, and upcoming international tour, this is his first venture as a solo artist after a decade of making music with others. Annie O caught up with him about what made him go solo, how his EP came together, and anxieties about his first solo tour. Get to know him before the big night.


ANNIE O: You were one-third of the band Sacco for the past few years. Tell us what led you to go on your own as John the Baptist.
JOHN THE BAPTIST: After Sacco stopped playing, I was unsure of what I wanted to do. I've never thought of myself as a frontman and had basically no experience doing it, so going solo wasn't really in the picture. I wrote with a lot of great artists during that time and really worked on my producing and recording skills. I eventually got totally burnt out and decided that I needed to do something that relied on no one but myself. John the Baptist was born out of frustration, but since I finished it, everything else I've done has been much more inspired. I was even able to get the band back together and produce the Sacco guys' new band, The Gloomies.

What's better and worse about riding solo?
Well, being in a one-man-band is great because you don't have to pay anybody! But during the making of the record, I wavered between feeling inspired and wondering if I was just making trash. In a band, you can at least bounce ideas off each other. This record is me bouncing ideas off the walls of my head. Honestly, though, I don't know how I will ever go on tour by myself. I'll have to bring my dog.

Tell us about your new song "No One Else." What's the story and message behind it?
"No One Else" is about feeling fortunate (and at times unworthy), to be with the one you're with. It can come off as being self-pitiful, but that's not how I wrote it. For me, it was an honest way of saying that a different relationship is just not even an option. It takes place on my daily walk to the park and pretty much sums up all of the thoughts that go through my head before I get there.

What are some of your personal sonic influences that you've tried to capture on your EP Many Moods?
It's funny because I don't think I was successful at all, but I was really trying to make a record that sounded like A Tribe Called Quest. I was very into boom bap and wanted to find an authentic way for me to do that, minus the rapping. I knew that I wanted to use vinyl sampling, specifically like Wu Tang and DJ Shadow, and I think you can hear that in the the drums; also with the harp in "Don't Talk to Strangers."

Tell us about your creative relationship with fellow Annie O Music Series artist Arum Rae.
Arum Rae is one of those talented artists that I got to meet and work with after Sacco. We'd done a couple sessions before we really had a breakthrough with "Don't Talk to Strangers." I showed her the basic track and she was very enthusiastic. Her excitement for the vibe and sound really encouraged me. The vocal she put on it (which was essentially her first take), took the song to another place.  Once it was all finished, I called her and said that I wanted to make an entire record that sounded like that. "Strangers" was the spark that set off the whole EP.

Are there any specific tracks by other artists you currently have on repeat?
I know it's hitting me late, but "Father Stretch My Hands Pt. 1" by Kanye. Also, "Comme des Garçons" by Frank Ocean.

You've had a lot of experience on the road. What's your most bizarre touring memory?
It's got to be playing late-night drunk curling with the US Men's National Curling team in Duluth, Minnesota.

If John the Baptist had a superpower, what would it be?
I'd like to be able to turn into an albatross and fly across the pond whenever I want.

What can we expect from your show at The Annie O Music Series?
You can expect some glitter, an airhorn, a fake guitar, and some Western wear.

Touring plans for 2017?
This year, I will be terrorizing every city from Washington, D.C. to Montreal. 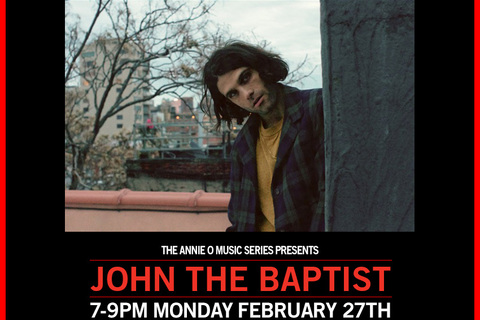