On Tuesday, August 15th, Annie O’s bringing Toronto's Elise LeGrow to the Penthouse to showcase her first full-length album, Playing Chess. With this LP, she covers iconic tunes from the archives of Chicago's legendary Chess Records by the likes of Chuck Berry, Bo Diddley, Fontella Bass, and more, with contributions from Questlove, the Dap-Kings, and Betty Wright. Not too shabby, eh? Annie O connected with Elise LeGrow to hear all about the making of the album and what we can expect from her upcoming show.


ANNIE O: Where are you based now?
ELISE LEGROW: Toronto, Canada.

Tell us about how the idea for this record emerged, and what's important about reimagining these classic songs?
It's been a year and a half already since we first discussed the idea behind Playing Chess, and it's my first full-length album! So, naturally I'm thrilled that it's coming out soon. My producer, Steve Greenberg, suggested the concept, but I was instantly intrigued by the opportunity to record these beautiful songs. The Chess catalog is so vast and it was a treat digging through it.

How did you decide to have "You Never Can Tell" as your first single. How does it speak to you?
I've always loved this song. The first time I heard it was during the famous diner scene in Pulp Fiction—Mia Wallace and Vincent Vega doing the twist—and it stuck with me ever since. It's a beautiful story of young lovers persevering against all odds. My producer, Steve Greenberg, found the lyrics to the song in a book of rock 'n' roll legends when he was a teenager and wrote a melody to them, never having heard the song. When we were choosing songs for the album, he played me his version on acoustic guitar which he had written almost 40 years ago. I'm a romantic, so I was delighted to have the opportunity to tell this story in such a new way and perhaps introduce it to a new generation.

Tell us about some one the awesome collaborations you have on this album?
I don't know where to begin! I was honored to have the inimitable Betty Wright do vocal production on the album. She flew up to Toronto from Miami and worked with me in the studio for an entire week. She is a force to be reckoned with. Her energy permeated the studio and kept me going on those long days. Back in Brooklyn where much of the record was made, Questlove came in to play on a song written by his father Lee Andrews, a track called "Long, Lonely Nights." I'll never forget looking over from the vocal booth and seeing him sitting at the drums. I'm a relatively unknown artist from Canada and there I was in the studio recording next to this superstar. Completely surreal experience.

Tell us how some of your major influences have impacted your sound today.
Etta James has always been one of my favorite singers. She has an ability to be utterly tender in one moment and guttural the next, like she's truly giving all of herself. That's something I aspire to be in my performances.

Are there any tracks by other artists you currently have on repeat?
Yes! I'm absolutely addicted to "I Feel It Coming" by the Weeknd featuring Daft Punk.

If Elise LeGrow had a superpower, what would it be?
Hmm...conjuring french fries! (My favorite food.)

What can we expect from your show at The Annie O Music Series?
It's a sneak peek of the songs from Playing Chess including the latest single, a reimagining of Bo Diddley's "Who Do You Love." Much like the album, the show is a mixture of R&B and rock 'n' roll with unexpected twists.

What's next?
The album is out October 6th and I'll be touring North America and Europe this fall. Stay tuned for details via social media and eliselegrow.com. 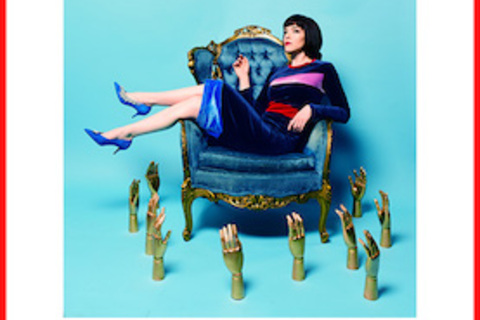