The Standard: As a DJ, promoter and designer you have been involved with an impressive listing of dance music institutions. Do you remember the moment you decided to dedicate your life to music and partying?

We had a monumental house party when I was at college in Southampton for a bit where I got carried away with the decor - that was quite a defining moment. Doing the decor with David Mancuso when Nuphonic had him over when they put out the first Loft compilation was a moment. He came down to the venue and tied ballons with us two days running. My area has always been the music and the production, I'm a designer by trade so that's my leaning. Thinking back though I DJ'd at a school disco with two tape decks at the age of ten so...

You are originally from Cambridge, where the late 80's music scene is said to have had a "strange disco micro-climate". What was it about?

I think the "strange disco microclimate" is just reference to the amount of heads that came from Cambridge. It was people like Harvey, Tom Bullock, The Idjut Boys, and Dominic from the Nextmen who turned me onto stuff; Groove Armada, Joe Hipkin from the Runaways who also came from that part of the land - and then later there were the secretsundaze boys so seemingly more people than you'd expect from a place of that size. My mate Jools Butterfield who went on to work at the Blue Note club in London's Hoxton Square and then for Nuphonic records used to sell a lot of good records to everyone listed above, so was a big part of that development too.

How do you explain such a creative scene?

It was probably different for everyone - but the eighties for me was hip hop and rare groove, acid jazz and the like and then finding the rave scene and US house music. It was just reflective of the time and helped by the fact there were a few good record shops. We also used to scour the car boot sales where the american servicemen who were posted nearby at these air bases would be offloading record collections as CD's were taking over or they didn't want to ship their vinyl back. Who knows?

What about the party scene then?

There was a monthly house music party called Pump that would host visiting US jocks; there were raves in the fields - Peril Soundsystem who'd do parties in barns and disused cinemas, parties in the housing Co-Op. Trips to Brighton for Tonka parties. It's a cosmopolitan town with all the University colleges, and so the townsfolk had their parties to dip into too. It was also quite psychedelic with all the lab technicians at the universities if you get my drift. And much freer prior to the Criminal Justice Bill. And of course it's an hour away from London so we were down there digging and raving a lot of the time too.

You spend a lot of time in Ibiza, you must have a very precise idea of your own definition of 'Balearic', don't you?

Musically it's a shifting term I think - like house, disco, hip-hop it's more a way of putting together a set - the context rather than any one song. I just think of sunsets really, Affrodizziact by Cry Cisco and Transglobal Underground's Temple Head make me think of hazy mediteranean sunshine and a moment in time, but aren't what you'd really call pure Balearic. Drinking shandy for breakfast and swimming at day break is balearic.

What did you learn from working with David Mancuso while doing the Lucky Cloud parties in London?

How to tie a balloon with a rubber band. Attention to detail. Quite a lot about sound systems (Klipshorns weigh a ton). Humility. All that stuff that was in the Love Saves the Day book I guess but quite first hand and from half-way up a ladder.

The Lovebox festival seems like a lot of big-size fun in London. How did it start?

Lovebox started by partly by luck as a festival and it grew to be monster, changing a lot along the ways. It's not easy to start if you want to book big live acts - you're not taken seriously at the start by agents, you're up against a lot of competition with other promoters' exclusivity deals and where they can tie an act into a number of gigs and deals, that you as a single festival can't compete with. We got there in the end but ironically that's not really where I wanted to be: 'music industry' is a bit of an oxymoron to me.

Do you consider partying as an art form?

Partying - not really unless you're a performance artist, although some people do miss the point of partying altogether. I would say that 'putting on parties' is an art form. Stan D'Arde on the Joys of Playing Hooky with STNDAIR 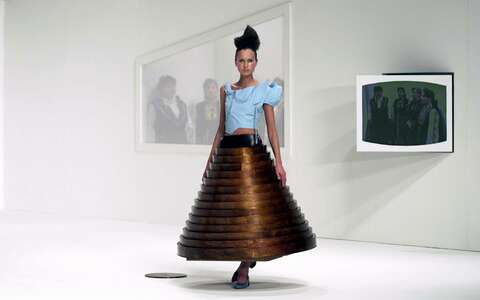 Chatting with Chalayan: A quarter century of London fashion