By chance you have glanced at – been horrified by – the Tumblr, Rich Kids of Instagram, an aggregate of the children of the .01% showing off via Instagram. Given, current life of Earth, the whole thing seems a little insensitive, but as the most popular girl in my fifth grade class once said, "Maybe I am spoiled, but at least my parents are rich enough to spoil me." We'll leave the moral and ethical questions to you, and answer instead: Are these pictures chic, or are they just plain tragique? Let's take a look ...

On the left you have a classic St. Barth's vista. On the right, not entirely sure what we're looking at. Reminds us of this painting. Hope the kid stuck the dive.

Love a good water propelled jet pack. There was one at The Standard Miami a while pack. Makes doing flips off the helicopter look pretty old school. Still pretty fun though.

Does Dom make it taste better? What are they cooking?

Where does one purchase such a slide?

There is something about a crisp cascade of plastic. Not so much in this other sad, sad, not even in an ironic way funny picture on the right.

On the left you have a civilized get together and on the right you have something out of Saddam's palace circa 1988. Doric columns? No. 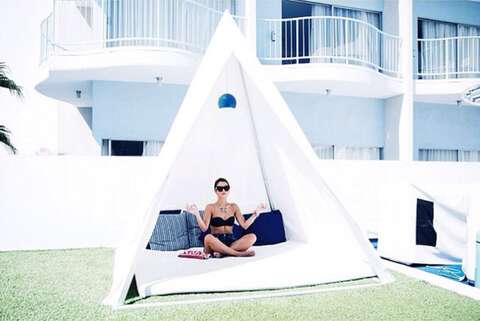 Sultry Days (and Nights) of Summer