Jeremyville is a person. But he’s also a place. The place is a teeming, bustling city, filled with fanciful characters that exist in the brain of an Australian (by-way-of Brooklyn) artist, who also goes by the name Jeremyville. For Art Basel Miami Beach, Jeremyville (both the person and the place) have infiltrated our magical Belle Isle hideaway, The Standard Spa, Miami Beach. Step foot anywhere on the property—from The Shop to the pool deck to the juice café—and there’s a good chance you’ll see his latest creation: our spritely Basel mascot, Raymundo, among others. Stop in and make his acquaintance. If you can't make it to Basel, pick up The Goodies online. If you want to meet the person known as Jeremyville, join us at that Basel institution of recovery and recuperation, the Lazy Sunday BBQ, where Jeremyville (both the person and the place) will be out in full force.

The Standard sat down with Jeremyville (in Jeremyville) to learn more about the creator, his wild imagination, and his creations... THE STANDARD: For the uninitiated, who/what is Jeremyville?
JEREMYVILLE: Jeremyville is a state of mind, an ever-growing landscape where anyone is welcome. In the city, there’s a cinema showing our latest animation, pasteups of our messages of change on the walls, a gallery showing the latest work, and a corner store where you can buy artifacts of your trip to Jeremyville. The key to the city is that it’s always growing and changing.

Tell us about Raymundo, the character you’ve created for The Standard Spa, Miami Beach?
A lot of my art practice focuses on inventing highly restrained and abstracted characters, and reducing them to their simplest form. The character is a manifestation of the message I’m trying to convey, akin to an actor playing a role in an independent film that I’m directing. I then express that character in as many mediums as possible: animation, public sculpture, street paste ups, collaborations, homewares, comic strips, and shareable gifs.

The Raymundo sugar bowl. Now available exclusively at The Shop.
Let's get some vital stats on Raymundo...

Motto:
Punk and sunshine all the time.

Hobbies:
Attempting to forge a career in art. Still tryin’.

Is your mind just filled with these characters? What’s your process like for bringing them to life?
Each character represents an atoms within us that makes up the human condition. Once wrestled into existence, these characters populate the streets of Jeremyville, get involved in projects, or appear in giant 3D sculptures— they essentially take on a life of their own.

To me, Raymundo conveys a message of sunshine and optimism from a place of initial anarchy and flux; positivity overcoming an underlying tension. Build your own rainbow rather than smash things up, proffers Raymundo. There is often a sense of redemption in my characters, many of them are flawed, but in the end their optimism and resolve shines through. 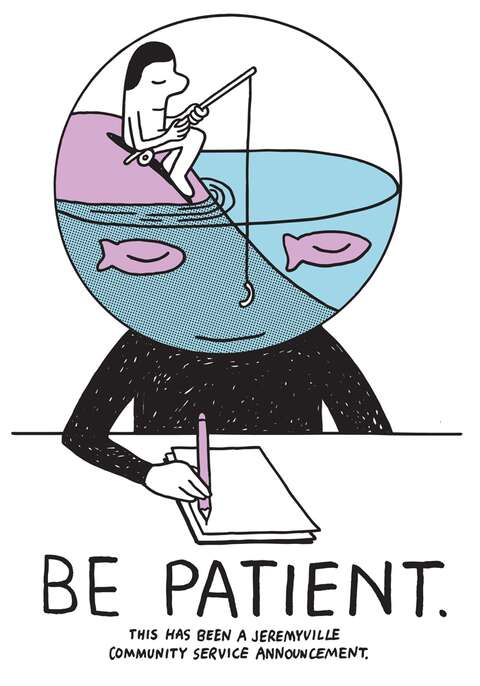 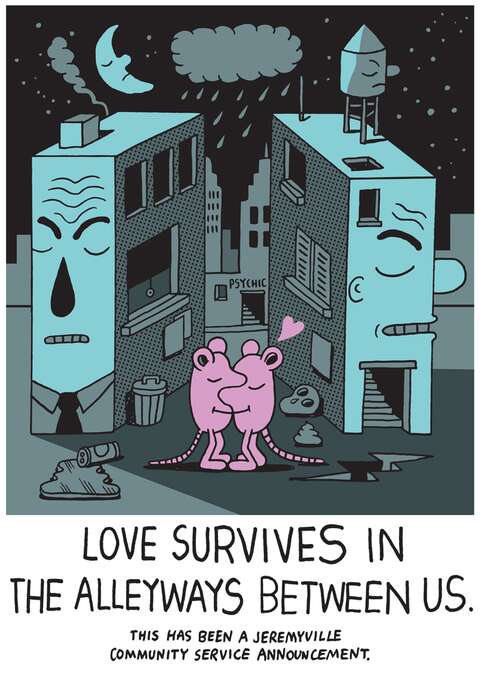 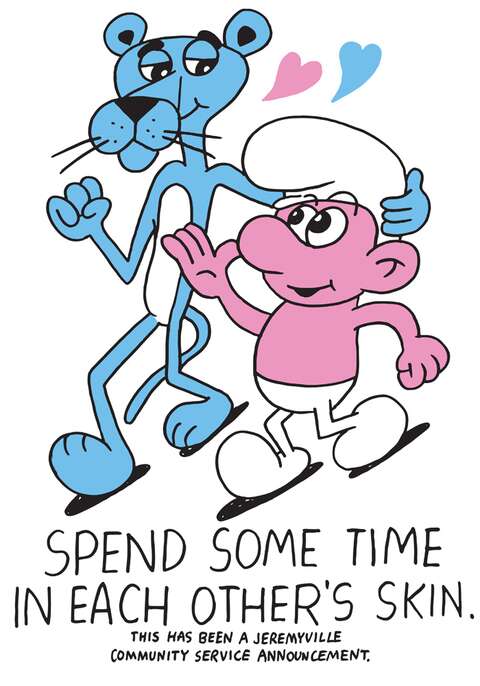 You’ve been working as a graphic artist since graduating from college, where you studied architecture…what led you down such a different career path?
Actually I feel there's a strong similarity between what I do now and architecture. Both start with an initial concept or vision, and you employ a process to make that vision come to life, as truthfully and cogently as possible.

Favorite place to draw?
I love cafes, the outdoors, airplanes, hotel rooms, trains—anywhere besides a table and studio. My studio is where I paint, but I draw in the field. I never leave the house without my sketchbook and pens.

When are you most productive?
When I realize daily how many of my ideas I still need to make happen.

How would you describe the mental state when you’re drawing?
I try to un-think, unlearn, empty out my mind when I draw. I find that if I over-think the piece, no matter what scale, it loses the energy and spontaneity, and the opportunity for unimagined mistakes. That's where the magic comes from—just drawing without a pencil underneath, no safety net, just a nebulous vision of where it will head. One essential drawing tool?
The risk of failing.

Name one artists (living or dead) who inspires you?
Warhol.

Your work has a kind of benevolent optimism? Where does that come from, and why do you think that type of message is important to put out into the world?
That's mainly within my Community Service Announcements series. A lot of the apparent optimism comes from an initial place of struggle and questioning. The conclusion of this inner questioning is generally optimistic. I believe most of us try and reach a positive conclusion to questions in life, otherwise it would be unbearable. I try to convey an underlying sense of that struggle and also the epiphany.

Aside from your Standard takeover, what are you most looking forward to during Art Basel 2016?
Decompressing in the Hamam at The Standard, and dreaming of new projects. It's been a very busy year. Buy Jeremyville Goodies at The Shop