We get a tour of Isabella Rossellini's Bellport, NY farm with her daughter, Elettra Wiedemann, and son, Roberto Rossellini, Jr. Not to mention Boris, Pepe, Boom Boom, Bobo, Bibi, and a lot of sheep named Harriet.
Were you to be reborn as one of the animals on Isabella Rossellini’s farm in Brookhaven, Long Island, there’s about a 75 percent chance you’d get a name. If you want to be guaranteed one, you’d have to be a kunekune pig or a goat. As the former, you’d join Boris and Pepe, the squat, acorn-eating swine; as the latter, you could find yourself in the goat pen with an onomatopoeic name alongside Boom Boom, Baba, Bobo, and Bibi. If you associate more closely with the avian family, you’re taking a risk—only some of her turkeys, chickens, and guinea hens have names. If you were reborn as one of her sheep, though, your name would undoubtedly be Harriet. All the sheep are named Harriet.

“They’re named after my friend’s dog who ran after the sheep, and she called them the ‘Hairy Jets’ because they—” and Rossellini waves her hand to signal a quick running motion as we approach their pen gate, which she leans over while her daughter Elettra is still closing it. 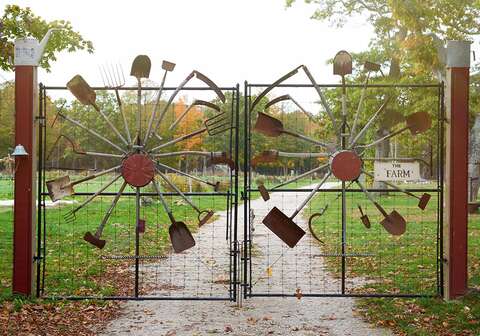 One might assume that a visit to Isabella’s farm and house would entail doing things like walking the 28-acre property with the two women, smelling tiny red-colored peppers for the scent of spiciness, and watching Elettra zest lemon over spaghetti tossed with a beet-ricotta sauce made from just-picked roots. What you might not expect, however, is that you’d have to remember more than 10 different names, human and animal. But once you step on the Rossellini property, you quickly realize that every visiting guest, significant other, and escaped chicken is part of the family.

“Elettra, show the eggs with pride,” Isabella says, clutching a live chicken and encouraging her daughter as we step inside the coop; Elettra awkwardly rolls the three eggs in her palm and shoots back, “I’m trying!” The fennel and heirloom peppers and the rest of the produce are under the control of Patty Gentry’s Early Girl Farm, which supplies New York City restaurants such as Diner and Marlow & Sons, but the animals—and therefore, the eggs—are all Isabella’s. That day I’ll watch Isabella and Elettra cuddle up with nearly every animal that lives on the farm on my tour of the land. They wrap their arms around the snoring pigs, cluck and crow at the hens and roosters, and speak Italian to the nuzzling goats. And in nearly every picture they pose for, Isabella calls her mutts Pinocchio and Coco to squeeze into the frame with her. At the farm, Isabella Rossellini is not the child of Roberto Rossellini and Ingrid Bergman who appeared on multiple Vogue covers and who sang a sultry-sad rendition of "Blue Velvet" in front of David Lynch’s camera; Elettra Wiedemann is not the model-cum-food writer who’s just finishing up her first cookbook. Here, Isabella runs after chickens and speaks to her dogs in Italian while Elettra digs in the dirt for watermelon radish and carrots. They are pleasantly kooky and sweet and goofy; they are mother and daughter. About an hour and a half outside the city by car, Bellport has a population of just over 2,000. On your way in, you pass over streets like Country Greens Drive and Golf Course Road and see the word “village” in half the town’s store names. While Isabella has owned her farmhouse for over 15 years and the farm for four, she’s been coming to the Long Island town for decades. In the 1970s, the sleepy South Shore area attracted iconic fashion photographer and Brookhaven resident Bruce Weber, who attracted his friends, families, and subjects, Isabella being one of them. Now, more than three decades since her first trip, she calls the area her home—as do Elettra and her son Roberto Jr. While they both live in the city, they try to make it out to mom’s farmhouse at least once a month.

On that specific day, though, Roberto is running a bit late; he’s caught in the torrential downpour that hit the city that afternoon but somehow managed to drift just past the South Shore. When he finally makes it, he has his girlfriend by his side and a rain-spattered copy of his first Ford Models comp card in hand. “Bella, bella, bella,” Isabella repeats when Roberto hands it to her; she hugs him and looks up to meet his eyes. “Piccolo,” an Italian word for short, she says to the chickens around her ankles before squatting down to hold out her son’s comp card to show them. “His mother’s a midget.” We spend about 15 minutes watching the farm’s arrogant turkey as Elettra is off gathering beets, carrots, arugula, and watermelon radish from the fields; when she walks back up to us with full buckets and dirtied hands, we head back to the airy, rust-colored farmhouse to get ready to eat. Isabella fetches wine while Elettra descends into her mother’s tiny basement kitchen to grate and sauté beets. She mixes the beets with fresh ricotta, and she moves to toss De Cecco’s classic spaghetti #12 into a pot of salted, boiling water.

“Pasta’s the first thing I learned to cook,” she tells me, pulling noodles out to test their doneness. As a kid, though, she typically topped it with the tomato sauce her mother taught her to make. (Isabella, as an Italian, says she learned it through “osmosis.”) While Isabella says she also cooks every day, Elettra has made a career in food and food writing; she runs the blog Impatient Foodie, and next summer, she’ll have a published cookbook with the same name. Once Isabella deems the noodles to have the perfect amount of chew, we head upstairs with the beet-ricotta pasta and a watermelon-radish-and-arugula salad that will not be eaten alongside the pasta; placing the two together on the same plate, Isabella says, is “too American.” Our family would kill us, they joke in Italian; the salad never gets eaten. And while the family of three twirls their forks in the bright-pink noodles and talk to one another in a mixture of English, French, and Italian, visiting family friends and guests slowly swarm the table—some grabbing plates, some just asking Elettra about her recipe.

“In America, it’s so formal to invite people over for dinner because you have different dishes and sides,” Isabella tells me. “But in Italy, we make easy things like pasta, so when people say, ‘hey, I may bring two or so friends,’ you can tell them to bring them.”