For American collectors, Cuban art has long been forbidden fruit—largely out-of-reach, somewhat mysterious, and therefore, deeply-seductive. With this spring’s announcement of the normalization of relations between the two countries, there has been a massive surge of interest by collectors, enthusiasts, and, well, us. The Standard set out to get a bead on this exploding corner of the art world by talking to someone on the ground with first-hand expertise. Naturally, our first call was to our man Stan, who put us in touch with Laura Daranas, one of the most talented young art curators in Cuba today.

Up until a few months ago, Laura served as a “Museóloga Especialista” in Cuba’s famous national gallery, Museo Nacional de Bellas Artes, before striking out to stoke the flames of independent artists. She aims to expose them to worldwide appeal as a curator for a hip "personal studio" (more on this below) in Cuba’s Miramar section (with co-curator Yessi Montes de Oca). In the rush of putting together her first independent show, Laura found time to answer some of our questions. 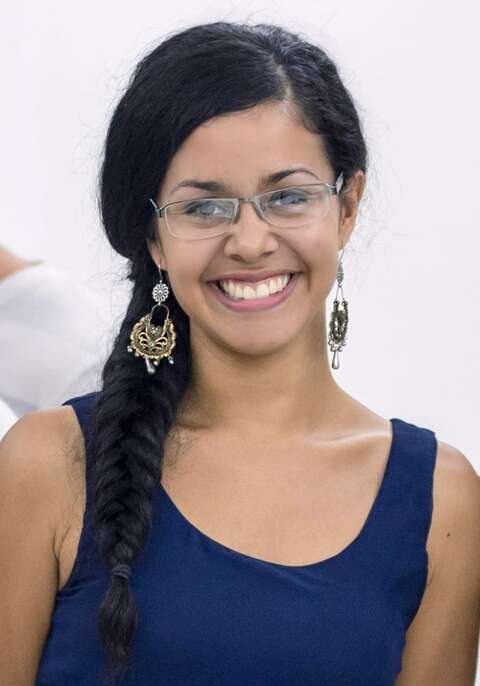 Curator Laura Daranas
STANDARD CULTURE: For those who have never visited Cuba, can you explain the importance and weight of the Bellas Artes and its impact on art in Cuba?
LAURA DARANAS: The National Fine Arts Museum (Museo Nacional de Bellas Artes) holds the most important Cuban Art collection in the world and also one of the more important collections of Ancient and Western Art in Latin America. It is not only the place to go to understand the history of Cuban visual arts, but it has also contributed to the shaping of that history. Since its foundation in 1913, the National Museum served as a repository for the old and recent history of the newly founded Republic. Wading through the unstable tides of politics, the Museum helped to build a sense of national identity. There’s a famous anecdote about Antonio Rodríguez Morey (the Museum’s director for more than fifty years) using old guns from the collection to defend the Museum when the government issued an eviction order. Since 1954, the face of the Museum changed when the new, modern and spacious building that we have today was inaugurated under the government of dictator Batista. The opening event was the Bienal Hispanomericana. Many Cuban artists saw it as a servile act towards the Spanish dictator Franco, so they reacted with an “Anti-biennial”. The history of the Museum is very rich and I can only recommend a visit (or more than one), because now there are two buildings to see. Tell us about the new gallery Miramar 601, and the two young Cuban artists who founded it, Alejandro and Aramis? Is this one of the new “cuenta propistas” (small businesses) we hear about? Or is part of the emergence of independent galleries?
Independent art galleries are not legal in Cuba. After the economic collapse in the '90s, artists were allowed to create studios to show and sell their work, which they did and have been doing well before the recent laws came into play. Two artists have their studio at Miramar 601: Alejandro Guanche, a 23-years-old painter who works mostly in a bright and sharp style (addressing historical, erotic, literary or biographical subjects) and Aramis Santos, a 38-years-old painter and draftsman who has had a long career as an illustrator and mastery of different techniques. Both of them show their work regularly at the Wynwood District in Miami. In addition to the work of the two, we also have guest artists on display in the rooms of our beautiful '50s house.

What are your thoughts on the influence by smaller independent galleries showing beside larger state run galleries, especially during a large week of foreigners attending (such as the Havana Biennial)?
During the Biennial, there were maybe as many “open studios” as official displays. The Biennial presents a kind of cross-section of current Cuban art, and visitors have maybe a more panoramic understanding of it. It is also an opportunity for us Cubans to see a little bit from the international arena. This year it was Galleria Continua, from Italy, bringing artists such as Michelangelo Pistoletto, Daniel Buren, Nikhil Chopra, and others.

The Biennial and most state run galleries do not have a commercial nature though, and that’s the main difference with open studios. The curatorial concept also sets them apart of course. I think there should be room for everything (private and state-run galleries alike) because each has a specific purpose. Particularly taking into consideration the huge disproportion between the number of artists in Cuba and the number of state-run art venues. I think this is bound to change. 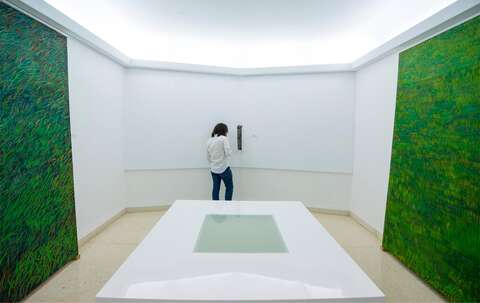 "I think there should be room for everything (private and state-run galleries alike) because each has a specific purpose."
Tell us about the current show at Miramar 601 and the spirit of the work? What is the overall goal of the gallery?
Mantra displays the work of five artists: Ernesto García Sánchez, Lester Álvarez, José M. Mesías, Marcel Molina and Miguel A. Machado. The central concept is to show the idea of repetition as a common artistic procedure, but it is the artists’ own narrative that matters the most, since all of them deal with repetition in a different way and motivated by different reasons. There’s painting, engraving and assemblage, and also abstract and figurative art.

The overall goal of the studio is to promote young Cuban contemporary art through an ample selection of the best. There is great talent and variety in the art that is being produced right now, in terms of subjects, techniques, personal narratives, style…we’re looking forward to surprising ourselves.

At the University of Havana, you studied Western Art, among many other things. Which US artists or movements inspire you most, as well as influential Cinema?
I really like Georgia O’Keeffe and Edward Hopper. I like abstract expressionism, too. I know David Hockney is not American but he has done a lot of work in California, so I think he counts. But I’ve only seen their work in reproductions.

What inspires me the most though is probably American illustrators and designers. I’m a bookworm at heart and I wrote my graduation thesis on children book illustrations. Artists such as Maurice Sendak, William Steig, the Provensen marriage, Ben Shahn, and Saul Steinberg really captivate me.

I enjoy cinema very much but growing in a family of filmmakers has made me painfully aware of my ignorance on the subject, so I will not dare to speak about “influential cinema,” but I will say that I like classic Hollywood cinema. Indiana Jones was my childhood hero and I always like to re-watch 2001: A Space Odyssey.
What are the biggest changes you've witnessed within the Cuban art scene since Obama and Raul Castro announced the normalization?
I’ve noticed more Americans coming to Cuba to see and buy art and more Cuban artists trying to capitalize on the moment. I’ve also seen the beginning of a growing exchange between institutions of the two countries. Particularly, the Bronx Museum show in Bellas Artes was among the best things I’ve seen here. And in the coming months, Cuban art (and artists) will travel to the Bronx in return.

What city and places would you love to see the most (with or without art) in the US?
I’m sure I would enjoy any city or any of the amazing natural landscapes of the US, but if I were to pick only one place, it would definitely, and predictably, be New York City. My brother was most impressed by the Met Museum and the Brooklyn Bridge, so I am looking forward to seeing those places. I would like to walk around Central Park, too. And another thing: I don’t know if it is a real place, but I would love to have a cup of coffee sitting on the couch at Central Perk. STANDARD DISPATCH: Behind the Scenes at the Havana Biennial “First and Foremost, You Have to Look” 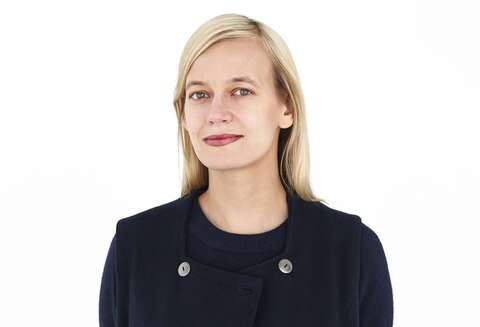