For the last two years we've doing a lot of looking and watching and waiting with great excitement for the Renzo Piano-designed Whitney Museum of American Art to open in The Standard, High Line's backyard. Now it's here, and you can actually see into the galleries from our Hudson-facing guest rooms.

The Meatpacking district has come a long way since the club kids held their noses as they slipped on slimy sidewalks; since the elevated trains delivered livestock to the meatpackers; since the shipbuilders hammered away. The opening of the new Whitney marks an important moment, both as the anchor to the High Line and as an iconic cultural landmark returning to its downtown roots.

We had the privilege of sitting down with Chief Curator Donna De Salvo to discuss the institution's new home, its debut show, “America Is Hard to See”, and the simple pleasure of looking.

STANDARD CULTURE: What do you think of your new neighborhood?
DONNA DE SALVO: Well, it isn’t exactly new to me. I’ve lived downtown forever, but what is so incredible about the Meatpacking District is the sense of history that’s here, even with all the development you still have this incredible sense of a New York that once was. This land was once owned by the Gansevoort family, which was related to Herman Melville. The site we’re on now was once a pumping station for the fire department. Then it became Premier Veal. And then the Whitney.

It’s true, even amongst all the new, some of the grit remains intact.
New York is like that. It sort of accumulates. You see the layers.

"The most significant material is light itself. That’s as much a component in the fabric of the building as the steel. It’s a very, very different feeling of openness." Have you learned anything new about America putting together the show?
Yeah, for sure, I think you see the competitive nature of the country reflected among the artists themselves. Every generation has to both absorb the lessons of the prior generation, and at the same time, erase them.

Do you hope people will come away with a new perspective on American art after seeing the show?
I hope so. The show is divided into 24 chapters and each one takes on a certain idea that is drawn from the collection. It’s a history as told through this collection. There’s no one history, there are multiple histories. But that said, there are also icons that we look on as markers in the history of American art, whether it’s Hopper, or Mark Rothko, or Warhol, or Alice Neel or Stuart Davis, or Jeff Koons.

I think that people will see this desire to innovate, this desire to rethink. And the openness to that, that’s what impresses me. It’s bold. And of course there’s activism. What really maps to the collection are artists understanding the power of the visual language to be able to bring about a degree of social change, or at least to be able to express certain ideas about the human condition.

We have an incredible group of prints from the ‘30s that looked at the whole history of lynching in the South and were made in response to legislation that was trying to be passed. Or in the ‘60s, certain pieces made in response to the Vietnam war, up until the post- 9/11, post-Katrina present... of course, that’s fundamental to art, whether it’s American art or art anywhere else. What the best art does is somehow find inherent contradictions, bring them together and create tensions.

"This is a huge, huge thing and it’s incredibly exciting. I think the art looks great." Views of the new expansive galleries. The walls are fully modular allowing for flexible templates. 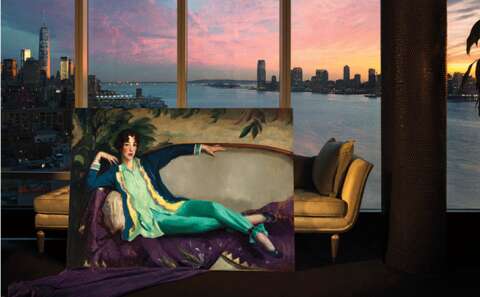 Taking it back to Mrs. Whitney and her original plan for the museum, I wondered if there is anything to make of the fact that the Whitney, the Guggenheim, and the MoMA were all founded by women.
Well, yes. That women are great. And these women were visionary. Many museums were actually founded by women. Many of them. The thing that sets Gertrude Vanderbilt Whitney apart though was that she was very much an artist in her own right.

Was American cultural inferiority a motivating factor when the museum was first built?
Absolutely. It was still a very new place that wasn’t yet embracing its own culture. Very few people were collecting American art at the time. The Met was primarily a European collection and MoMA, too, was very much slanted towards European art, Cubism and the school of Paris. Mrs. Whitney was frustrated because she wanted to support American artists and there was not a place for them, and as you may know, she offered her collection to the Met with an endowment and they declined, which led her to found her own museum. The Whitney Museum of American Art, Photo: Karin Jobst
So the new digs. They’re big. Much, much bigger than the Breuer Building. Is that daunting? Liberating? Frightening? A new kind of challenge?

It’s liberating and a challenge. Frightening, I don’t know yet ... maybe I’m not being honest with myself. This is a huge, huge thing and it’s incredibly exciting. I think the art looks great. We all loved the Breuer building. It’s a great modernist icon and I was lucky to install the number of shows that I did there. This is a different kind of building and I worked with Renzo and Adam Weinberg on the design side and we chose materials that were different, very distinct from the Breuer Building. The quality of light is incredible. We were just installing the top floor, and to be able to look at these amazing pictures by Stuart Davis and Georgia O'Keeffe, a sculpture by Calder, under this natural light ... it’s truly exciting—I mean truly exciting.

There are more natural materials incorporated, no?
Well, the floors are wood, a reclaimed pine. There’s also steel and glass. The thing about Piano is there is a real truth to materials and he really understands how to play the material in a very nuanced way. But of course the most significant material is light itself. That’s as much a component in the fabric of the building as the steel. It’s a very, very different feeling of openness. 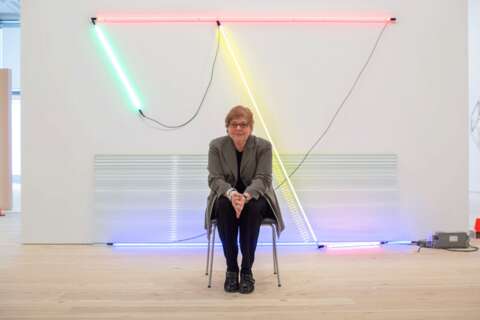 Donna De Salvo in front of Ba-O-Ba, Number 3 (1969) by Keith Sonnier, part of "America Is Hard to See". Portraits by the beautiful, "sexiest photog in Brooklyn" Henry Hargreaves.
Was that the idea behind the 5th floor gallery, the largest open, column-free template of its kind? At the Breuer Building we had very set floor plates and at times you come up against a scenario where you just need more space. Before I came to the Whitney, I was at the Tate Modern and I worked on the Turbine Hall projects and I have had the opportunity to work in those kinds of spaces and they allow you to think differently as an artist, as a curator, and as a visitor. The architecture influences the thinking.

People have been describing it as flexible because you can divide up the space however we like, but what does that mean, “flexible”? It’s aspirational. It’s about being able to think in a certain way.

We’ve been going to a lot of shows lately that have mandatory audio guides and have all sorts of multimedia addendums. Are they just bells and whistles, or it depends?
It depends. We work so much with living artists and some really don’t want there to be an audio guide and we try to respect that wish. Our head of education says she’s always interested in a “heads up” experience.

We do have audio guides and content available through your phone. There are various ways you can access different layers of information. This is one of the great advantages of the digital era—that you can dig deeper.

I like to see first and then dig deeper. Any curator who tries to say that they look at a work of art and they know everything about it by just looking, you know ... I would say my understanding becomes enhanced by a level of research and then I come back to it and I look at it anew. First and foremost, you have to look. That’s something you have to remind people of: the simple pleasure of just looking. 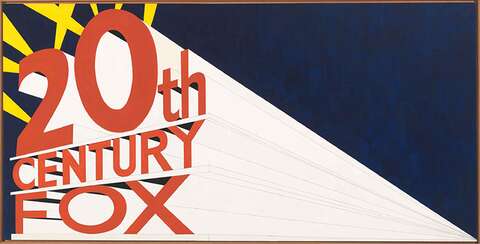 Does one have to look at everything in a show, or can we just focus on the stuff we like?
I don’t think that people should feel compelled to consume everything. I often feel that way. When I’m a visitor, I feel like I have to see it all, but that way you get a broad brush, the general feel of things, but I think it’s great to survey the room and see if there are a few works that attract you, that you have an experience with, because that’s what you hold on to. At least I do. They really stay with me.

Do you remember the first time you were taken by a piece of art? I would say for me it was the first time I saw Jacques Louis David’s “Death of Marat” at the Louvre. I had studied it in Jansen’s Art History, but seeing it in the flesh blew me away. That’s when it clicked in my head about how things live in space and how you make this mind/ body connection with a work of art.

What are some of your favorite small, out-of-the-way museums around the world?
The John Soane in London, is a great little museum that’s really fantastic. He was an architect and it’s a quirky house that has all these architectural fragments. It’s like a cabinet of curiosities. I also love the Menil collection in Houston that Renzo designed. It’s a highly personal collection, which I love. It really traces the artist’s vision. Also the Walter De Maria “Lighting Field” in New Mexico. It’s a work in the landscape of stainless steel rods that are one mile by one kilometer, and you have to go for a 24-hour visit. It just kind of messes with your mind.

The word curate has been co-opted by pop culture. What’s your take on that?
Well, what it implies in pop culture is a kind of agency—that you have the opportunity to choose what you want. We’re all niche markets now. We’re no longer a mass audience and we can have agency.

In the old days, in Europe, curators would be called, “The Keepers” of the collection and that was a different kind of word, and it’s true that you are a sort of keeper or custodian of it all. I think it’s fascinating that it has made its way into pop culture. I’m always interested when things are re-interpreted in some new way. As a curator that’s often what you’re doing. You’re interpreting and creating meaning, and so in a pop culture way it’s about how people want their lives to mean, in a kind of existential way.

You can curate your own visit to the Whitney, now open, just a hop, skip, and a jump down the High Line.