What felt like just a sore heart from too many tequila shots on the beach in Tulum, was actually a very serious genetic heart condition that warranted a quintuple bypass surgery. Luckily our dear old friend, Brad Fisher, didn't just survive, he thrived and is feeling better than ever with a new show coming up at Peter Makebish Gallery.

An installation at The Standards since Monica Lewinsky gatecrashed the opening in '98, he's had one of those charmed careers of acting, modeling, Hollywood entouraging, but most importantly, painting. We popped over to his East Village studio/clubhouse nicknamed, BRADFISHERTOWN to see how the show, "Little Pink Clouds," is coming together. A soft knock and Freddy, his pup, goes wild. The door opens and there stands Brad: Tall, handsome, paint-spattered and smiling.

Where did you get the idea for your "Little Pink Clouds"?
I got a commission from this really great couple out in Long Island. They lived in this mansion and wanted something BIG for their entry way. The problem was that I painted figurative and they wanted something more abstract. I started playing around and I came up with the clouds, originally they were called dirty little clouds.

What was so dirty about them?
It was all in the palette. I found with clouds that you could make shapes that were a little naughty, but really they just look like clouds. I just couldn't help myself.

He swears up and down they aren't penises.

So how did the show with Peter Makebish come to be?
I've known Peter for a long time, but he only likes abstract work, I was only figurative. So when he saw my new works he was really into it. He was like, "I love your little clouds man. I LOVE your little clouds. Let's do a show."

When did you first start painting?
I was painting in college, but never wanted to go to art school because then you had to paint how your professor wanted you to paint. It too minimalist for me, like an all white canvas with a grey line and that was suppose to be like, oh wow!

What'd you study in college then?
I went to Berkeley and studied journalism. I wanted to be a war correspondent.

And then?
And then one of my professors said, "you're very TV friendly and photogenic." So I started taking some of those classes and then it turned into, "God, you should be a movie star." I didn't want to be a movie star, but then I got to LA and it was so easy.

What do you mean?
I would go to Spain for a month and shoot a film (a horrible film) but I got paid and stayed in a 5-star hotel and got to be in Spain.

That doesn't make you a movie star!
Obviously! The point is that I hated it, I didn't talk about my craft. I couldn't give a shit. I just wanted the money and to travel. The whole time I was painting, painting, painting. That was my focus. It was my release.

A super-sized little pink cloud to be

How did you transition from not being a movie star to a bonafide painter?
I made a nice life for myself in Los Angeles. I lived in the Hollywood Hills for a long time. I had a little bungalow house with a studio in the back. It was my first real home with two dogs, a yard. It smelt like jasmine all the time, and I played Joni Mitchell and The Beatles on my record player. And then all of my starlet friends would come hang out in the studio with me.

And they started buying your work?
Yes. And they took me out with them; every celebrity needs an entourage. They have their trainers, their stylists, their makeup artists, and then they had me: their artist. I started getting caught up in their coterie and I hated it. LA is just show business. If you're not in show business, then you have no business being in LA.

That's when you decided to move to New York?
Yes. I always knew I was going to end up here. I turned 40 and thought, "if I don't do it now, I'm never going to."

Reminiscing on the past in his bathroom of "Almost Fame".

So you moved to New York and continued painting and modeling?
Yes. I came to New York at the right time with salt and pepper hair and a beard. It was a hit, but now it's a little tired. Now you can't walk down the street without seeing a guy with grey hair, a beard, and glasses. I'm like, "you got to be kidding me man. Bitch stole my look!"

In modeling, there's definitely a game to play. Do you battle that in the art world as well?
I battle it all day long. In the modeling industry and in the art world you have to kiss some ass. I used to be so rebellious, but with age I've learned to relax a bit. I systematically burnt every bridge that I ever crossed. It came to bite me in the ass.

So you've learned to play the game?
Yeah, a little bit. You gotta man!

Little Freddy holding down the fort. 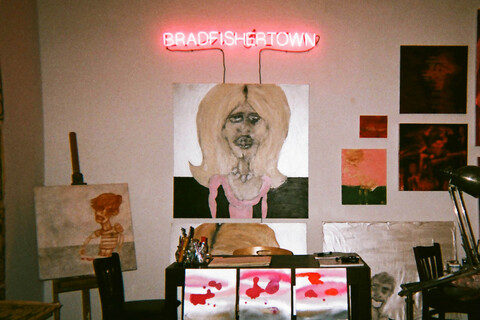