Tighten your tucks and buckle up, y’all, because the race is blazing forward at full speed. For our Thursday RuPaul’s Drag Race viewing party, Miss Girl, hosted weekly by Rify Royalty at The Standard, East Village’s narcbar, season nine’s Trinity Taylor served up shows and silicone and shut. it. down.

Complete with three costume and wig changes, acrobatics on and off narcbar’s banquettes, and somersaults through the crowd, Trinity had the entire bar SHOOK, henny. But with Ms. Taylor, aside from the shows and shade, there’s sweetness. Before she took the stage, we shared a quiet moment with Trinity “The Tuck” Taylor to chat about why she declined the invite for All-Stars 3, that infamous Valentina lipsync, and, of course, how she earned her nickname. THE STANDARD: "The body is here, bitches!" Let’s kick it off with your season nine werkroom entrance line. How did body become such a big part of your drag identity?
TRINITY TAYLOR: The person who first showed me how to do drag said I had to pad because I was a really skinny kid with no body and no hips. I was literally a stick. So they showed me what pads were and they were humungous! But that’s what Southern drag is—it’s all about shape and illusion. Then a couple years later, I had the opportunity to have my body done and I wanted it both for my career and for me as a boy, because my ass was as flat as a pancake. The reason why I decided to alter my hips was because I was going the pageant route, and a lot of pageant girls that were trans or had body augmentation did better.

Do those augmentations ever affect how you present as a boy?
No, not really! I mean in really fitted pants I look shapely, don’t get me wrong. I identify as a male and I’m not gender fluid, but I would never mind people considering me that.

It’s clear how you’ve earned your nickname “The Tuck.” We’ve seen the tuck, and it is unparalleled. How did that become your thing?
I started tucking immediately from the beginning of drag. After I got my body done and was showing it more, I had to figure out a way to make the tuck tighter and smaller because there was no [padding or] protection between me and the real world. I just focused on figuring out what worked, and finding specific ways to fold the tape and position things. A lot of girls actually do a tuck like me, but a lot of girls don’t. Like Valentina, she literally looked like she had a diaper on during season nine. The worst tuck of the show was Sasha Velour; it was bulky. Several times. I think she’s fixed it since, though.

You came to RPDR with a pageant background and pageant successes, but you blew us all away with your comedy, camp, acting and sewing skills. How did you come so correct?
I think a lot of people discredit pageant girls, thinking all they know how to do is be pretty, but what they don’t understand is that pageants are drag boot camp. You learn a lot about polishing your drag, no matter what kind it is. You pay attention to details and the overall look. Pageants engrained polish in me with whatever I was going to present, no matter what it was.

Did you meet many Ru girls at pageants?
I competed with Alexis Mateo. And then I competed with Alyssa Edwards twice, once before the show [at a pageant] when I didn’t even place in the top because I’d just started drag, and then years later in 2014 after her season of Drag Race when she competed in National Entertainer of the Year. I beat her and she was runner-up. What do you think your season brought to the table?
I think our cast was very political. There were a lot of girls who were very smart. Regardless of education, I thought a lot of our cast was able to be eloquent and speak on important topics. It wasn’t about drama, it was about making a statement, getting your point heard, and bringing forward things that needed to be talked about.

Who was successful at doing that?
Shea Coulee had great points for entertainers of color. Sasha brought forward a different aspect of drag that people in the public eye hadn’t seen before. Peppermint was so important for the trans movement; she is a great role model, and a trans woman had never made it that far in the competition. It was amazing growth, not only for the show but also for the trans community. She and I were very close.

Did you have beef or tension with any of the girls?
Not to the extreme of season 10. Eureka and I had clashes, but I think she had more beef with me than I had with her. Valentina was a lot to deal with because she was a diva, but me and her became close after the show.

Obviously we were gagged by the infamous “I’d like to keep it on, please” masked lip sync, but we saw the edited TV version. Tell us about that moment in real life.
It was what you saw on TV but more. The show didn’t even show all of Ru’s reaction; she got even more heated than what was shown. It was a lot of long pauses and very awkward, and we were like, “What the fuck is going on?” But Valentina didn’t think she was going to be in the bottom, and she was, and she didn’t learn her words, so she tried to keep her mask on.

Did she show any nerves or signs during Untucked?
Not at all. She had poker face on the whole time. No one thought that was going to happen. I genuinely believe had Valentina made it through that episode, she would have made top three.

Another iconic moment of your season was the Gaga gag. When Jaymes Mansfield was at narcbar, she said Lady Gaga smelled like hot glue and gave terrible advice. What was your personal experience with Mother Monster?
It was hard for me to connect with her at her entrance because everyone was screaming and Eureka was giving an Emmy-nominated performance with her emotions. When someone is trying too hard to steal the spotlight, like Eureka was, I just step back and I’m like, “OK girl, you go ahead.” I connected with Gaga during Untucked critiques; I found her very genuine, very humble, and very inspirational. She didn’t tell me anything I didn’t already know, but it was the emotion she put into her words. What I got was that she worked really hard to get where she is, and said to make it on your own and make it happen for yourself. I felt a connection to that. 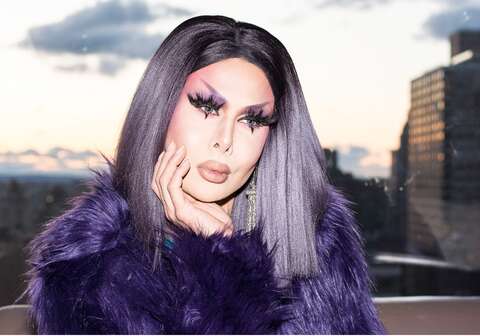 You’re undeniably a hard worker and a tough competitor. Being on the show for its entire duration, did you ever get overwhelmed?
I think the show will allow you to see who is actually competitive and who isn’t. People who are competitive and focused are not going to break down as fast as someone who may not be a competitor. But if you’re a true competitor, you’re going to stop at nothing, you’re not going to falter to where it makes you get eliminated. I stayed focused.

How did it feel when you learned it was going to be a top four, not a top three?
I was worried for the outcome of exactly what happened; that the hard work we all put in throughout the season wouldn’t count, and it didn’t. A lip sync separated us from the crown. Obviously that takes talent, but when you are a competitor and when you’ve done contests many, many times, a cumulative score is always what wins in the end. And I was devastated that I wasn’t top two. And my heart broke for Shea because she won the most challenges. That being said, I thought the finale was great TV. I thought it was great for ratings. It was something people didn’t expect, and the top two were not who people expected. But Sasha slayed her performance, and by production’s rules for the finale, she won.

I agree Sasha slayed her performance, but do you ever think gimmicks in lip sync are too much?
My personal opinion is that an entertainer should stand on their own. But in the circumstances of what they turned the finale into, you have to have a gimmick. If you don’t bring something different, you’re not going to stand out. And that’s what Sasha did; she was extremely smart when she chose her gimmick. Same with Peppermint. Do I think I won that lip sync against her? Absolutely. I slayed her. But her hair reveal, even though we’d seen it already, and I didn’t care for her costume change, it was still a shock, and that’s what they want.

We’d love to see you compete again. Why did you decline being on All Stars 3?
[I declined] not because I didn’t want to be on, but because I know with the show that you have one good year to travel a lot, and if you hinder that with other projects, you’ll do yourself a disservice. After your season, they move onto the next. I wanted to work hard, get goals in line, and it just wasn’t the right timing.

How do you think you would have fit into the dynamics of that cast?
I don’t know! I tried to think about that, but you don’t know until you’re there. It all has to do with how much explanation they tell you and choices you make. It’s all a gamble. Production doesn’t give you good guidelines. It’s a little cloudy.

What did you think of Bendela’s early departure?
Well, good for the other girls, because Ben would have won. It was a great gimmick for the show. I know the show didn’t tell her to do that, but it was great TV. I don’t think it was smart. She would have kept going to the end doing as well as she was. No one was going to beat her.

Now, let’s talk about season 10. Who are you rooting for?
Honestly, I think there’s something missing this season. It hasn’t gone that deep yet. But I’m rooting for Asia because I know her. I really like Miz Cracker and Monique Heart, and if Eureka can get her shit together, I think she’ll do really well.

Who from the current season would you adopt into the Haus of Taylor?
Aquaria. I think she is fierce and embodies a lot of things that my clan of drag offers—specifically confidence. She is a performer and she’s creative.

And what’s the tea with your hot adoptive drag child Rizzo from the RPDR crew makeover challenge?
We’ve kept in touch since! He’s a cool guy and he’s very much a gentleman. Something I like about the show is you may not meet the people it is affecting, but that’s what the show does—it brings people into [something] they don’t know and makes it more human and relatable. It was amazing bringing an outsider into my world. 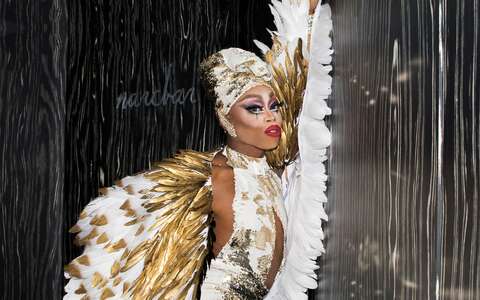