The 2017 Whitney Biennial curators’ road trip might have made for great reality television. During the first half of 2016, Christopher Lew, a curator at the Whitney, and Mia Locks, an independent curator, traveled to forty cities around the country (and a few abroad), scouting for the most exciting work by contemporary creators. Hopping from one community to another, the team assembled a roster of 63 artists and collectives whose work they wanted to present at the museum’s all-important survey of American art making today.

Locks and Lew opened up about the controversy, their curatorial process, and the most complicated build-out in the museum to date. Curators Mia Locks and Christopher Lew
THE STANDARD: Starting with what has been at the forefront of attention: what were your conversations with Dana Schutz like before deciding to enter her painting into the Biennial, and how did public reaction differ—or not—from what you expected?
CHRISTOPHER LEW: With Dana, the conversation started when we invited her to be in the exhibition. We built our checklist of works by her from there. And certainly the three paintings she had in the show, Elevator, Shame, and Open Casket, each speak to different aspects of what she’s been thinking about of late. And that’s a part of how we presented her work
—in these different spaces on the fifth floor. The Biennial is something where artists often raise really hard questions and that happens throughout the exhibition. There are things that will make viewers feel uncomfortable. And in that sense, it’s something that we knew could happen. Open Casket is not alone in that.

MIA LOCKS: As far as the strong response to the work, we definitely weren’t surprised. I want to be clear. You can’t approach anything related to the subject of Emmett Till or any kind of racialized violence and not expect, of course, that it will have a strong reaction. That said, I don’t think either of us thought that it would go down quite like this. The show does raise a lot of very important questions, many of which came out of the debates around Dana’s painting. In some way, we anticipated that a lot of these were issues that were going to be part of the discourse.

You held a discussion, “Perspectives on Race and Representation,” on April 9th as a response to the outcry. What were some of the biggest takeaways from that event?
ML: These conversations about race and racism really need to happen. There’s obviously an appetite for it. It’s something on the minds of not just artists, but everyone at the moment, for many different reasons. But I think particularly in art and in relation to our show, it was very obvious that we needed to create a space for more of those conversations to happen. We worked with [poet] Claudia Rankine and her colleagues to try and broaden the conversation. Not just about the painting but also about the issues that have come up. I think it was meaningful and intense. We need to continue to have these conversations, as much and as often as we can. 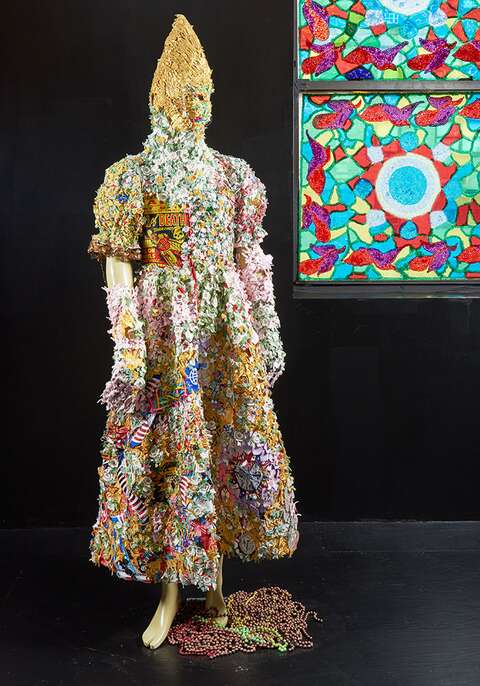 Could you speak about some of your most memorable studio visits?
CL: We went to forty cities across the country and a bit internationally in about seven months. It was a whirlwind. It was amazing to go to Detroit and to meet Maya Stovall, who’s a choreographer and an ethnographer. We spent time with her in an old abandoned bank where she lived, watched documentation of her videos, and saw how she’s engaging with the city and doing these performances. There were a lot of really rich conversations. I think it’s important to get a sense of a city in which artists are thinking and making things.

ML: We also had a really great trip to Puerto Rico, where neither of us had been. We did a number of studio visits, but were also getting a sense of the cultural landscape there. It was right on the brink of the debt crisis. We had a lot of conversations with artists around an artist run space called Beta Local that ended up shaping a lot of the broader conversations we were having with artists around the country.

As the election approached, did you start to see shifts in the conversations you were having with artists?
CL: We never set out to make a show about the election. Certainly there were a lot of things in the air that artists were thinking about alongside everybody else in this country. We were mindful of the tenor of some of those questions, or, the sense of divisiveness in the country. But you know, the show itself didn’t try to say exactly what was going on during the election campaign. 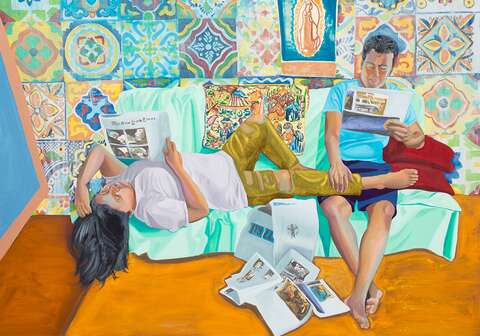 How would you describe the dynamic between the two of you?
ML: We made every single decision together. It doesn’t mean that we agreed on everything. Actually, we disagreed a lot, but we were able to have these really interesting disagreements. I don’t think either of us has worked as closely with one other person. The Biennial really comes out of many, many conversations with different people. In terms of our dynamic, Chris is a very good early talent scout. He’s lived in New York for almost his entire life. He has his finger on the pulse. I’m more about the next round of thinking. I take longer to digest how I feel about something, but Chris will often not even know what he thinks, he’ll just say, "You know, this is interesting," or "We should go look at this." And I was often the one who was sort of like, "But why, what are we looking at?" I think that was to our benefit in a lot of ways.

CL: I think it was a great balance. I’d say, “Let’s go see this thing,” and Mia would say, “Why?” and I was like, “We don’t have time for the why. Let’s just go.” A gut instinct can take you somewhere, but then you also need to slow down, pause, think about the larger framework. In order to make a show, you need both approaches.

The show ends up splitting into these mini shows within shows.
CL: Given the flexibility of the building, where you can build walls exactly where you want them, there was quite a bit of pre-planning. And we wanted these shifts through the flow of the exhibition where you could have rooms where it’s much more of a group show dynamic, where there’s a range of works by different artists speaking to one another. What was the timeline like for selecting the artists and then arranging the work?
ML: We definitely select the artists first. And then, a lot of things are very much in motion, all the way up to when things arrive. Decisions get made or unmade up until those last few weeks. You don’t always know how artworks feel in space until you’re there with them. Then you have the Ajay Kurian in the stairwell—we knew his work was going to be in that specific site and we knew roughly what it was going to look like. Or someone like Raúl de Nieves, who treated the windows on the east side on the fifth floor. We didn’t actually see the work until it was installed but we’d visited him and saw bits and pieces, and we knew it was sited in that particular place. It’s a real range from artist to artist and project to project.

Any very last minute decisions?
CL: One of the things we discovered through the installation process was the room with Henry Taylor and Deana Lawson’s work. We certainly knew that the works by both artists would be powerful but didn’t realize the kind of correspondence or dialogue within one room that could be created between the works. How about that complicated tiered Samara Golden piece, which overlooks the river?
ML: Samara said she wanted to use the windows facing the river on the fifth floor. Then it was a process of framing out the space and figuring out what exactly she’d like to do. In this case, she really wanted to use that view and extend it using the mirrors, which is a kind of recurring theme in her work. That was one of the most complicated installations we did. None of us really knew what the piece was going to be like until we installed it. And it went up bit by bit. That’s part of what working with Samara is like. She makes a model and has a vision in her head, but so much of it happens along the way.

What was the install process like?
ML: The architecture gets built first. Samara made the objects and shipped them in from LA. They were put on level by level. Although some of those rooms are upside down. She does all the work of kind of making those objects and affixing them. Then the museum helped her to get them up into the space.

And was there anything that you wanted to include that you weren’t able to?
CL: There are always more shows!