Passing through New York on a tour for his gorgeous new book "Central", Martinez explains the hyper-local inspirations behind his wild and exquisite creations.

Sliced raw lapas (clams) and bright orange galletas (a type of cookie) are placed atop seaweed, sea rocks, and shells before being garnished with chancaca-painted yuyo tips (herbs brushed with a type of sweet sauce). Arañas de Roca, translating to “Spiders of the Rock,” is not a naturalist art sculpture, but rather something much more palatable. The abstract dish takes up a page in Peruvian chef Virgilio Martinez’s Central, a cookbook of edible concepts that blur the line between food and art, with harmony in flavors and sustainability advocacy.

“These dishes are very hard to fake or replicate because you really have to be in Peru [to make them],” Martinez tells me over wine at Café Standard when asked if he wants people to cook from this book, which calls for hyper-local Peruvian “ingredients” like sargassum algae, barquillos (mollusks), and huarango tree wood chips. “Even for us, it’s hard to follow these ‘recipes’ because ingredients change.”

Which is essentially his answer: Because every single dish in the book (and at his Lima restaurant of the same name) is solely composed of ingredients grown in one specific locale and altitude, and represents one Peruvian ecosystem, Martinez isn’t expecting readers to attempt to recreate Arañas de Roca or “Leaves of the Andean Valley” in their kitchen. Instead, the book is a document of what drives the 39-year-old chef: his dedication to the preservation of natural ecosystems, which is something that can be replicated around the world. Born in Lima, Martínez dreamed of being a professional skateboarder as a child, but after breaking both shoulders, he was forced to reconsider his future. He had always had a fascination with food—as he recalls eating ceviches made from just-caught fish with fishermen during breaks he’d take while surfing—but at the time, Peru lacked a strong culinary scene. Later, with a dream of getting out of the country, he decided to enroll at Le Cordon Bleu in Ottawa, Canada to “get to know the world.” He’d went on to work at well-known restaurants like the now-closed Lutèce New York City and Can Fabes in Sant Celoni, as well as both the Bogotá and Madrid branch of Astrid & Gaston, before opening Central in 2008.

Released on October 10th, Central exists in the guise of a cookbook, but like so many of Phaidon’s publications, it’s less of a manual that you’ll shelve in your kitchen and more of a tabletop decoration that you’ll display where guests can leaf through its pages, ogling at images that justify the argument that food can be art.

“The aesthetic of the dishes represents the different landscapes [of where they’re from],” Martinez tells me. The dishes in his book are grouped by the altitude from which they descend, so in "Marcona" (sea), plates resemble sea terrain with corals, shells, and rocks; in "Ande," the dishes resemble steppes and slopes with “fallen” leaves, branches, and bark. 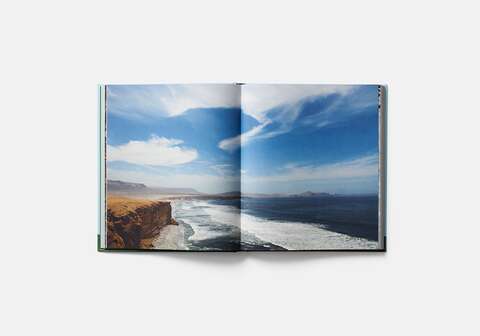 By solely using ingredients that are indigenous to specific ecosystems, not only does Martinez mimic the appearance of the natural locale, but he also mimics its flavors. Because an ecosystem’s minerals, water, and soil give life to its plants and animals, the living things that thrive together inherently taste good together, according to Martinez. When you bite into Cerdo en Mashuas, or pork with indigenous tubers and a frutille flower reduction, you’re not just tasting those components—you’re tasting the Andes. With 20,585 and 5,585 types of flora and fauna respectively, on a landmass that covers nearly 500,000 square miles, Peru offers Martinez endless inspiration.

“Our food can’t taste as beautiful as the landscape [from where it comes], but we want you to be able to taste that place, the harmony,” he says. “We look for Peruvian plants that may not even have any gastronomic value by consulting anthropologists, sociologists, and biologists. I learn from Andean people who may not understand organic, but they understand the natural earth.” And in Arañas de Roca, the dish that Martinez first points out, one can visualize Peru’s coast as he explains the inspiration behind it. Growing up on the coast, he remembers playing on one seaside rock in particular that was covered in langoustines, mussels, and seaweeds. For him, the memory is nostalgic, so he wanted to encapsulate it on a plate. And while the headnote of the recipe in the book lacks this backstory, Martinez’s passion for translating the natural beauty he sees in Peru emanates from each dish; it’s something you can digest without ever intending to replicate the food itself.

“We just want to respect and maintain the harmony of natural ecosystems, which is a message that can translate anywhere in the world,” he says.