We chat with Japanese artist Shinji Murakami about his new installation "Le Coeur" (The Standard) on the rooftop of The Standard, High Line, and his new exhibition "Lateral Thinking with Withered Technology" at the Catinca Tabacaru Gallery.
THE STANDARD: It’s freezing today in NYC and it can be windy on top of The Standard, High Line. Tell us about the painting process of your installation, Le Coeur, 19 floors above the Hudson River and the Meatpacking District?
SHINJI MURAKAMI: I was helped by six friends, artists, and staff from Catinca Tabacaru, the gallery that represents me. It took us four days in total to paint Le Coeur. At the time, it was sunny and not too cold, so I can’t complain about being outside. Obviously the view was very nice, but after a while you realize that you have to finish the painting and it’s real hard work, so I kind of forgot about the view!

The drone video of the installation looks awesome. What was your first thought when you saw the picture?
I thought, “Wow, it’s so huge! I’m awesome!” [Laughs.] I like the idea that Le Coeur brings joy to the people, and when seen from the sky, you realize what a colorful and fun addition it makes in the middle of the city. "I felt I had to do some street art to become someone." –Shinji Murakami

The heart symbol is a NY classic (I ❤️  NY). Would you say your painting is a declaration of love to NYC?
It’s true that it’s a NY classic, but I did not think of that. I’ve been using the heart shape for a long time in my art practice. Mainly because it’s universal—it could be in anyone’s mind, body, soul, etc….

Before we talk about your exhibition and your collaboration with The Standard, let’s go back in time to the early 2000s. You were raised in Osaka, Japan, and moved to Tokyo where you became an artist, first making art in the streets. Tell us about painting in the street of Tokyo in the 2000s. What do you miss the most from that time?
Street art is very illegal in Japan, but I felt I had to do some street art to become someone. I was at the very beginning of my career and I needed to start somewhere. I must say it was very cool. My heart was very driven to do street art. I still miss that excitement feeling. That’s also why I’m very happy with the LED cubes I am currently creating. My plan is to spread them onto the streets, to take my artwork back outside the gallery walls.

At that time, you had the iconic character of Bokochan.
I was drawing a few different characters, but this one stuck more than others because my girlfriend was very into Bokochan and I always trust women’s instinct. Bokochan looks like a cat. The name Bokochan comes from a Japanese letter 凹, pronounced “boco,” which means “not flat,” and its shape is the same as the character’s face.
Previous Next 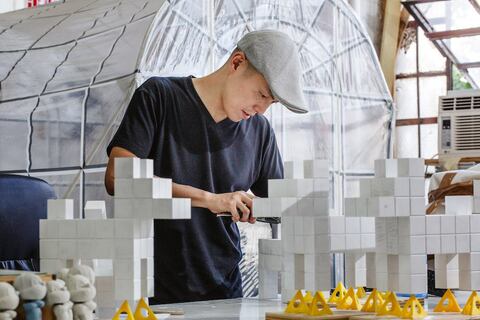 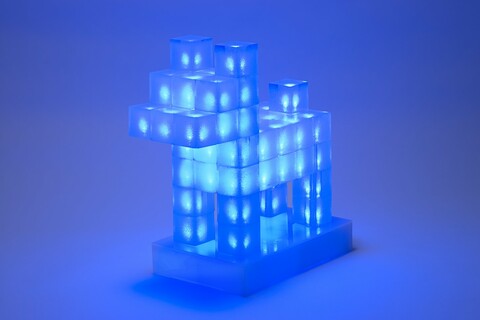 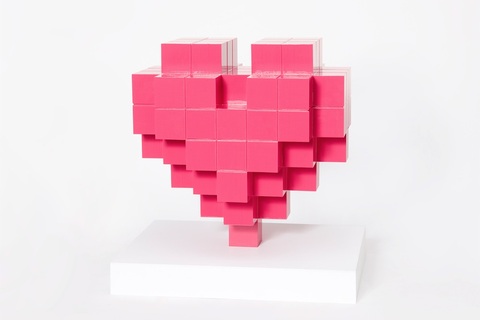 Back in NYC, you’re opening your latest exhibition at the Catinca Tabacaru Gallery. It’s called Lateral Thinking with Withered Technology, a reference to the philosophy of Gunpei Yokoi, the creator of the Nintendo Game Boy. Basically the philosophy is that you do not need to use cutting-edge technology to innovate and create, and the real creativity can be found in "withered technology," you just have to find a "lateral" way to use it and create something new. How would you illustrate it with an example that is close to your work or experience?
A good example of that could be when Yokoi created game & watch, a kid’s toy. He used the system of a calculator to make the toy because the calculator has been very cheap and in doing so it became a withered technology. When I use the LED panels and small computers called Raspberry Pi, I create something new, taking it out of its initial use. I extend that philosophy to how I re-use social media culture, as one can see in my piece called @elonmusk, currently on view at Catinca Tabacaru Gallery in New York. It’s a live feed of Elon Musk’s tweets.

Your exhibition at Catinca Tabacaru Gallery makes references to 8-bit technology and augmented reality. You said it’s the movie Jurassic Park that sparked your interest in CG effects when you were a teenager and ultimately led you to be an artist. Are your 8-bit creatures dinosaurs of today’s technology?
My 8-bit creatures are fossils that someone has to discover.

You also did a special collaboration with the The Shop at The Standard. You said, “I want a grandmother and her young granddaughter to walk by my art and be able to say, 'It’s so cute!'” Does that apply to that collaboration?
Of course, yes! Everyone can recognize a heart!

Le Coeur (The Standard) by Shinji Murakami can be seen on Le Bain's rooftop
The Standard, High Line