31 miles longs, and just a quarter of a mile wide, accessible only by ferry, with no roads, no cars, and very few rules, Fire Island is both a social and geographical anomaly. The two-sentence history of its most famous stretch – between the Pines and Cherry Grove – goes something like this: After the 1938 hurricane razed the existing desultory beach shacks, the local township started fresh, gridding out the land into small, affordable lots for the burgeoning middle class. Due to its naturally secluded locale, the bohemian set flocked and by the late '60s Fire Island had become the world's first (post-Antiquity at least) gay summer retreat.

A handsome young architect and Louis Kahn disciple named Horace Gifford was one such "artistic" type who settled in the Pines, often seen wandering down the beach from appointment to appointment outfitted in nothing but a briefcase and a speedo. Of the 78 homes he built over his life, 63 were on Fire Island and his vision of gay communal living would set the aesthetic precedent for weekend life in the F.I.P. But like so many of his generational cohorts, he was lost to AIDs and his legacy forgotten.

Forgotten that is until another Fire Island-loving architect named Christopher Rawlins was taken by a particularly exquisite mid-century home. He launched an investigation and long story short, Fire Island Modernist: Horace Gifford and the Architecture of Seduction was born.

"These houses are the hot gay nerds of Fire Island," he joked last week introducing his book at a Standard Talks in the High Line Room. He went on to illustrate the hallmarks of a Gifford house: small footprints with vertiginous angles, cantilevers, multilevel splits, stairs and skylights, small bedrooms, large communal living spaces with lots of "pits" and "lofts" for more intimate encounters.

And if you happen to end up in one such "conversation pit" this summer with a handsome fellow, blow a kiss to old Horace and say, "thanks Mr. Gifford. Gone, but forgotten no more." 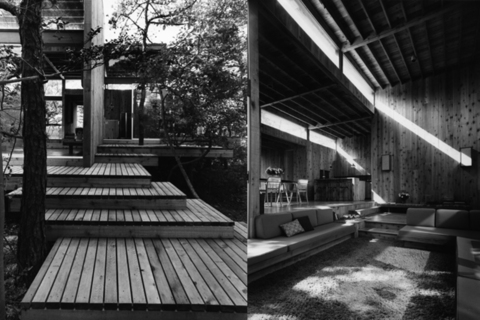