How did Maurizio Cattelan go from mischievous donkeys and racist elephants to master of the editorial photo spread? Creative director Dennis Freedman recounts their collaboration on the W Magazine Art Issue which marked the artist's intriguing transition. Maurizio Cattelan, the infamous Italian provocateur, made headlines recently with his live donkey at the Frieze Art Fair. When we visited for the press preview, the animal's caretaker offered us a freshly-made souvenir free of charge. Incidentally, it was a big weekend for Cattelan collectors. His controversial Hitler sculpture sold at Christie's for $17.2 million. And speaking of historical shits, you'll have to wait a little longer for Maurizio's solid-gold toilet at the Guggenheim. It's backed up–tee-hee. Apparently, the fine folks at Kohler are having some difficulties with fabricating the golden commode.

Since his "retirement" from the art world five years ago, Maurizio Cattelan has made a radical shift in medium, or career, or both? He's arguably as, if not more, famous now for his super-saturated magazine imagery than for his hyperrealistic, hyperoffensive sculptures. We thought it would be interesting to talk to Barneys Creative Director Dennis Freedman, the man who first chaperoned Cattelan to magazine land back in 2009. It was this ambitious photo spread featuring an "out-of-work" Linda Evangelista (weathering the height of the financial crisis in Oscar and a diamond choker) that would become the prototype for "TOILETPAPER".

After many, many, many lunches and lots of roundabout, nonlinear, open conversation, Dennis and Maurizio confirmed the model: THE STANDARD: How did the concept come together?
DENNIS FREEDMAN: When [Linda Evangelista] accepted, she became the muse for the whole project, and we built a story around her that involved many, many, many different scenarios—all of them very distinct and different.

When did the photographer, Pierpaollo Ferrari, come into the picture?
So, when we first met, I said to Maurizio, “Who is going to take the pictures?” And he said to me, “Oh, I have somebody. Don’t worry.” But he wouldn’t tell me the name. And every time we met, I asked the same question. I’d ask, “Now Maurizio, who is going to take the pictures?” and he kept saying to me, “Don’t worry! I have somebody!” This actually continued for a while, and at one point, I really did begin to wonder if in fact the whole process of having these lunches and all this talking was in fact some kind of a performance piece. In fact, I began to doubt whether a photographer even existed.

So, I called Dakis Joannou, a friend as well as a huge supporter and collector of Maurizio’s work. I’ll never forget this telephone call. I said to Dakis, “Listen, I’m calling to ask for your advice. What do you think?” And he said to me, “Dennis, there is no other artist in the world more serious than Maurizio Cattelan.” And that was it. If he tells me he has a photographer, I have to trust him. 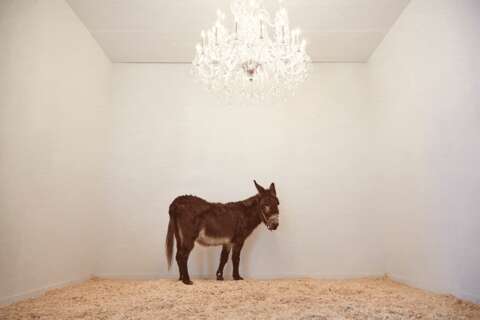 "My donkey only eats canvases. Gather up all this terrible art and feed it to him."
Maurizio was overheard saying the above as he inspected his Frieze Project, "Warning! Enter at your own risk. Do not touch, do not feed, no smoking, no photographs, no dogs, thank you,” a recreation of his show at the Daniel Newburg gallery in 1994.

Finally, much, much later in the process, he tells me the name. I had no idea who he was. And you also have to remember that the subject is Linda Evangelista, who only works with a handful of photographers. She’s already taken a leap of faith signing on to the project and now this. And then, I finally meet Pierpaolo Ferrari. He walked in and he looked about 13 years old, and I remember thinking, “Oh my God. There is no crew, no lighting people, no assistants, and we’re shooting a supermodel.”

Nothing was really controlled in terms of the lighting. I remember holding Linda’s hand and reassuring her that this was all going to work out. I have to say she never once expressed concern over how she would look.

What kind of deadline were you on?
It wasn’t so much about deadlines, but this was just a massive project. When you look at the pictures, you can see that each one of those images is like a scene in a movie. We staged an entire procession in Little Italy. We made a float for Linda to be carried on. We went to this huge mansion in New Jersey, and we had her coming out of a wall we’d built from scratch. Out of the 30 images we shot, only one didn’t make it in. We staged an entire protest against capitalism and we hired an entire crowd of protesters. Linda was in the crowd. They had signs and placards. It was huge. I remember rejecting the picture because I felt that it didn’t ring true.

A meaty America for W on the left and an isolationist America on the right for T and TOILETPAPER. Images courtesy TOILETPAPER
Previous Next

A cover of TOILETPAPER

(Above: Excerpts from the W Art Issue and covers of TOILETPAPER.  Images courtesy TOILETPAPER)

How would you describe Ferrari and Cattelan’s dynamic?
Well, the one thing I can say for myself is that I felt 100% aligned with Maurizio’s thought processes, thinking, and imagery. To me, they felt extremely logical and fascinating. I felt from the very start that we spoke the same language. We didn’t need to say that many words to get an idea across. The concepts seemed logical, brilliantly creative, and intelligent. I would say it was a really organic experience. I can’t remember any kind of philosophical or creative disagreements.

You just had that creative shorthand.
Yes, you need to speak a certain language. I believe in a kind of nonlinear way of thinking—of your thoughts and your imagination running in hundreds of different directions, and I think the subconscious is really important. And let’s say also that I was extremely lucky and fortunate during my time at W Magazine to have incredible creative freedom.

Art, fashion, photography, architecture: do you think the relationship between those worlds has evolved since you were at W Magazine?
Well listen, art is art, fashion is fashion, design is design, they are what they are. It doesn’t mean that there can’t be communication and collaboration, but I think that in the end there is a difference. Whenever I’ve worked with an artist, I’ve always been very careful to understand their work, whether it is applied to a window at Barneys or a photo essay in W Magazine.

Window display at the new Barneys New York in Chelsea, which if you haven't visited yet, you should. It's stunning. Photo by Margaret Lee 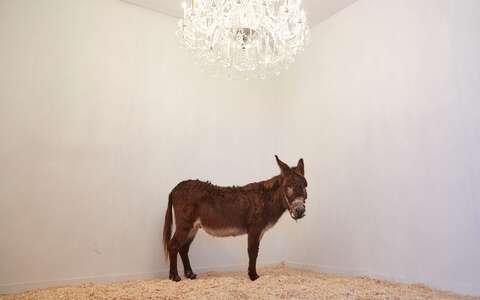 A Guide to Frieze Projects 2016