Iranian artist Farhad Moshiri creates works of staggering richness and fantasy (an entire magazine stand made of Persian rugs, furniture sets made of gold, insanely intricate beaded tapestries) infused with subtle, but intensely amusing wit. Standard Culture reached him at his home in Iran to discuss process, politics, and his new show “Float” at Gallerie Perrotin in New York which starts tomorrow and runs through October 4th.

STANDARD CULTURE: Do you show your work in Iran, or only abroad?
FARHAD MOSHIRI: I went back to Tehran after 13 years in LA and started showing in Tehran galleries and in my apartment. I got my first break (commercially) in Tehran. A few shows later I found representation in the West and the Emirates and stopped showing at home. I just haven’t been feeling it since, and I don’t mind being criticized for that.

Do geo-politics influence your art, or is that a completely America-centric thing to ask?
I’m sure that it influences me on some level that I’m not fully aware of, but I try not to be. I hate to be trapped in that. It’s very alienating, which is the opposite of what I want my work to be.

The artist before his signature knife motif

What’s something most Americans probably don’t realize about Iran?
That we’ve already gone through a modernist period in the ‘60s and ‘70s.

What’s something Iranians don’t realize about Americans?
The entire world eats and breathes America on a daily basis, Iran included. Americans have done a very thorough job of self advertisement and continue to do so. I’m sure that Iranians have realized many things about America.

You don’t personally fabricate most of your works now. Do you miss it?
I still love working with my hands. Actually I love hard labor. To be utterly exhausted before bedtime is a very rewarding feeling. But when a viewer expresses his or her appreciation for the time and skill I have personally put into my work, my whole world crumbles before me. So now I let my assistants do the art and I go somewhere else and chop up some wood.

Why did you become an artist?
Because my ideas weren’t very practical.

View of exhibition in 2004 at Extraspazio, Rome

There is a humor and, one might say, a sassiness to your art. Is humor a primary objective or a side effect?
There is a tendency for the Iranian art community to believe that Art is no joking matter. I totally agree with that. Art is serious business. I can’t help it if you find something funny in my work.

You said that you would rather be collaborating with Louis Vuitton on a window than doing a show in a museum. Why is that?
Yes, I did say that in an interview that Louis Vuitton had set up for me. Would you rather have me say the opposite?

How did you arrive at the various mediums that you use?
At some point in my life I was seeing so much ugliness around me that it all started to look kind of pretty after a while. So I started to mimic that by borrowing the same materials I was seeing, like fake crystals, glitter, all sorts of decorative stuff really.

Was there ever a eureka moment where you said, ‘no paint, no photos, no traditional mediums.’
There was a period when I thought the reason why some people hate my work is because they religiously believe that artists must buy their supplies from artist supplies stores. So I had an anti -artist supply store phase. But I have learned to forgive. Paint is good. I LOVE PAINT. In fact, I use so much white acrylic that there is currently none left in the Tehran market.

Your art seems very expensive to create. Do you ever have to worry about things like budgets or money?
Yes, I do worry. Sometimes I ask myself why can’t I go back to the good old days when all one needed was an easel, a small white canvas, and a set of oils and brushes, and no assistants. It’s just that new ideas are more likely to appear when you step out of your comfort zone.

How did you come up with the knives in the wall concept?
I suppose there’s a period in every artists life where one has a rush of ideas and is too impatient to edit. It must have been one of those periods. You know...One of those, ‘what-the-hell, why-not’ moments.

Have you ever thrown knives before?
Of course. But it was too noisy. Noisy art scares me. I always tell the installers to quietly press the knives gently into the wall and have a zen attitude, but I’m not sure they always listen.

What’s your least favorite part of the art world?
My own openings.

What’s your favorite?
The day after my opening.

What are you most proud of?
Being charitable – as little as I have been - and nothing else.

A place you’d like to visit before you die?
Now you’re gonna make me cry.

What is your motto?
Life is short. So am I. 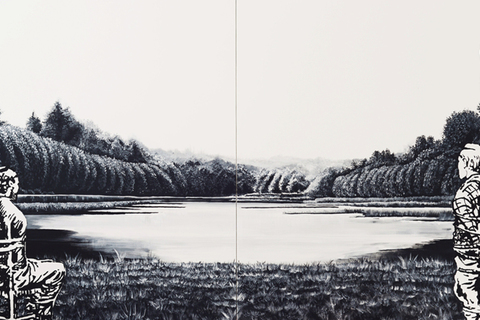 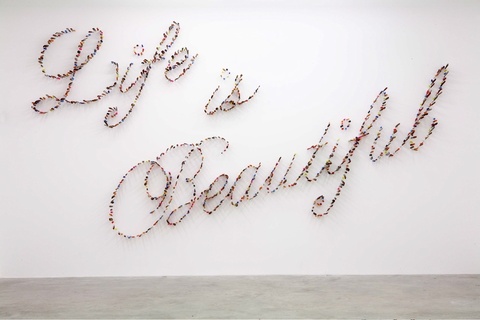