They’re both bitches. On stage.

In real life, Drew Droege and Sam Pancake are sweet, Southern gentlemen who also happen to be the hilarious hosts of SPiN LA’s Bingo Night (the next one is on November 13th) at The Standard, Downtown LA. But lately they’ve also been bitches — mother and daughter bitches, to be precise — in Sean Abley’s gender bending farce "Bitches" at LA’s Acting Artists’ Theater, which runs through November 2nd.

Standard Culture recently caught up with the boys for carnitas at Casita del Campo, a Silver Lake Mexican mainstay with a gay following that dates back to the 70s. “We’re here all the time,” says Pancake. “As Drew says, it’s our cruise ship.” Pancake is referring to the Cavern Club theater in the restaurant’s basement where the duo debuted the first show they created together, "Strong Choices," a send-up of Southern Californian, yoga-centric, self-help culture.

“LA is the home of the best and the worst people in the world,” says Droege, “and some people are just really...the word I keep thinking of is ‘invasive.’ It’s just so fun to play people who are so outwardly spiritual — self-help, guru type people — who are also just complete narcissists.”

Pancake adds, “People come here to get famous, or to make it or whatever, and when they don’t, they still feel this need to feel superior to others, so they become really obnoxious.”

“We turn people into characters, and we can play them and exorcise the demons,” Droege says. It’s a central theme of the work they do together, be it "Bitches," "Hard Choices," or the hilarious Chloe Sevigny videos for which Drew is perhaps best known. Pancake and Droege take dark desperation or a savage sense of superiority and elevate it to the absurd in a way that makes us laugh in recognition.

“We met in Melissa McCarthy’s back yard,” Pancake says. “I remember you had these glasses on, and I was like, ‘Who is that one? She looks like A LOT!’”

“She was right!” Droege agrees, laughing, “I had these giant rose-tinted Elton John glasses that were bigger than my giant head.”

“I feel like you were wearing a 70s polyester shirt maybe?”

“I probably was. I really tried to rock that for a long time back then.”

Fashion choices aside, Sam and Drew have managed to rock something truly unique - something that has made them LA’s East Side theater darlings for the past few years, and they show no signs of letting up. “Drew’s on stage even more than me,” Pancake says. “He’s on stage every night.”

Beyond "Bitches," they are both involved in concurrent shows. For Droege, it’s his one man show “Bright Colors and Bold Patterns” based on an invitation he received to a gay wedding which came with the request, "Please refrain from wearing Bright Colors and Bold Patterns." He recently co-starred in "The Disgustings," a comedy written and directed by Jordan Firstman about two gay friends with dark undertones. Pancake can be seen as the Manager/MC of “Los Feliz 90027,” a spoof of a soapy workplace drama that’s set in The Rockwell restaurant where it’s performed twice a month. They both also appear in frequent collaborator Jim Hansen’s “Paragon School for Girls,” a web-series in which a sinister force lurks around a Harry Potter-like boarding school for girls with special abilities. Naturally in this case, the girls are played by boys.

“I remember years ago, I was doing “Facts of Life” on stage,” Pancake says, “and I remember thinking, if I turn 40 and I’m still wearing a wig and playing a teenage girl on stage, shoot me. But by the time I was 40 [I thought] even if I had my own [TV] show, I would do this shit as much as possible.” He graciously pours water for the table and continues, “I love being on stage. I’ve been part of a great comedy community for 20 years, but I really feel like, personally, I hit my stride with this group of guys and girls who I’ve known with Drew and through Drew. This just feels like joy.”

“I think the future of theater is in LA,” says Droege. “Because New York is wonderful, but there’s just no space. There’s no space and no money and no time. It’s so punishing in New York because it’s so expensive and so fast. You can’t fail there. If you fail on stage there you don’t get any sort of grace period. There are more theater spaces in LA than there are in New York, and so you can try things out and you can be more experimental and say, ‘Why not? Let’s play. Let’s do this.’” 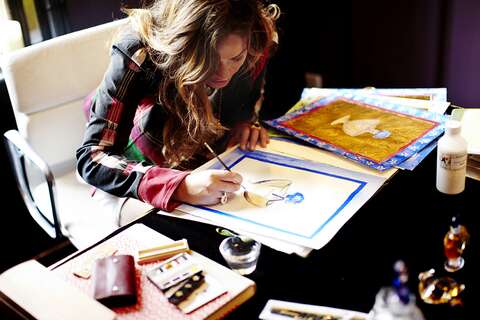