We have embraced a vision of the Contemporary art world as an arena to which its core protagonists come equipped with — presumed talent aside — bottomless energy, laser focus, marketing flair, thick skins, killer will. Hello Richard Serra, Julian Schnabel, Jeff Koons, Marina Abramovic, Damien Hirst, Larry Gagosian. It’s a nifty model, but it doesn’t allow much wiggle room for the haphazard, for angsty noodling. Dieter Meier’s accidentally brilliant career – currently documented in a one-man show at Robert Wilson’s Watermill Center on Long Island — could have happened on a different Art Planet.

The film career kicked off first, in 1967, when Meier was 21. On a visit to a filmmaker friend he began fiddling with a movie camera. “I was just trying the functions,” he said over a lobster in Sag Harbor’s American Hotel. “I didn’t know what I was doing. It was all happening in the camera so it was such a relief not to be confronted with what I did immediately. I was always so full of doubt. Whatever I tried to do dripped between my fingers, it wasn’t good enough, and I never managed to finish anything. But only when it came back from the lab I saw the result. This was my first film. So I continued to make these films. It was always a wonder for me.”

In 1969, his experimental movies were shown at the Tokyo Film Festival, at London’s ICA and at Cannes. “It was my first feature-length film,” he says. “An inner monologue of a man who walks through a city.” He went with the American film-maker, Gregory Markopoulos. “Gregory was very embarrassed because nobody really cared for these films,” he says. “So he went to the president of the jury, who was Visconti.” A press conference resulted. “There was champagne, waiters. And of course nobody showed up. One German critic came, looked around and left. Gregory looked at me and said ‘Dieter! Sabotage!’ It was so funny!”

Meier was then an uncommitted law student and a committed professional poker player. His non-committal career as a Conceptual artist began that same year when he sat next to a Henry Moore bronze on a Zurich square with 100,000 small pieces of metal. “For a whole week I would count these pieces into bags of a thousand,” he says. “I counted from 8 to 12, and from 1 to 6. This was so empty and so nothing. Anybody could do it. The only reason it was there was because I wanted it there. Funny things happened. School buses came. A newspaper reported that the famous underground artist Dieter Meier is doing this and that. And I was totally unknown. I had never done anything in this field. I didn’t exist.”

In 1969, Meier spent a week counting and bagging 100,000 small pieces of metal in a square in Zurich. It was his first foray into Conceptual art.

Other works followed. He attended a reception at the New York Cultural Center in early 1971, holding a handgun. A sign at his feet read THIS MAN WILL NOT SHOOT but the expression on his cadaverous face was such that you might not choose to sit near him on the subway. Two days later he was beside a subway on the corner of 57th Street and 8th Avenue, offering to buy the word YES or the word NO from passers-by for a dollar. Grace Glueck reported in the Times that he turned down a woman’s offer to sell him a MAYBE.

In 1972 he showed at the well-credentialled art fair, Dokumenta, in Kassel, Germany. Over the next few years he had himself photographed jumping and as a non-existent novelist “Thomas Mattes”. In December 29 1976 a solo show of his work opened at a major artspace, the Kunsthaus, Zurich. Career lift-off surely impended. Not.

Maier attends a party at the New York Cultural Center in 1971, holding a gun. A sign at his feet read, "THIS MAN WILL NOT SHOOT."

“I decided that what I call the Art Race is not good for me,” he told me. “I couldn’t stand presenting myself to be judged by this very small and, in many cases, not very knowledgeable food chain of the art market. I felt like Hansel & Gretel kept by a witch in the fairy tale. The have to hold their finger out for the witch to check if they are ready to be eaten. It was not healthy for me. So I gave up the Art Race.”

Meier was outta there. But going where? The movies were still a go project. Often he would perform in front of the screen as he showed them. “I would play a guitar with one string, I would use my voice,” he says. “I would use noise.” Then came another coincidence. A local producer partnered him with a Punk band. Through ‘77 and ‘78 he performed and toured with bands called Herz, the Assholes and Fresh Color and recorded his first single, Cry For Fame, with the last. “Because of that I met my partner Boris,” he says. Boris Blank. Yello was born.

Yello became stratospheric, the progenitor of Electro, one of the first distinctively Euro bands, serial crackers of the charts. “It just happened, and there we were, selling millions of records,” Meier says. But before we get into the Yello years, let’s backtrack. Inheriting moolah is wonderful, right? For an artist not necessarily. “It can be positive,” Meier says. “It was positive for Cezanne. He came from a banking family and spent his life in Aix-en-Provence, without the pressure of having to please, having to go out there and make a living.

“But it can also be a negative. Because when you are not forced to do something or finish something for economic reasons, then you doubt. If you know that you can survive without doing anything, then in your mind it has to be something very, very special. Otherwise it’s not worth my while. And this can kill you because nothing is good enough. “

That’s why he had gone into professional poker. “Where you are like any other guy who sits at the table,” he says. And that was also why he had made that first dumb piece in a Zurich square. “I never pretended that I was suffering and poor and that I couldn’t do what I wanted,” Meier says. “That was why it was important for me not just to do it at home but to be public.” There had been persistent sniping that Meier was a hobbyist, a dilettante. Had Yello’s success mellowed such critics? “They hated it,” Meier says. So to Yello.

“I think Yello comes from Boris’s urge to create sounds,” Meier say. “He did not play an instrument any more than I. He was a natural-born sound addict. A lot of the European pop and rock was imported flowers. These guys just played the styles of the Anglo-Saxon world. And I don’t know what would have happened to us if we had been able to play instruments., whether we also would have fallen into this trap.” They couldn’t, they didn’t. He added “Yello was never driven by songs, it was driven by sounds.” They were taken up in the US by Frankie Crocker, star DJ on WBLS. It was the early MTV days and Meier’s wondrously loony visuals were soon a staple (Catch them on YouTube). They gigged at the Roxy. Yello perform and put out records to this day.

And the art? Meier had, in fact, been showing at a small Zurich gallery from time to time through the Yello years and in 2011 he had a small show in Berlin. This was caught by the critic/curator Harald Falkenberg who promptly began to put together a museum show. A particularly timely happenstance, this. “I am farming in Argentina,” Meier says. “ On one of the farms I make wine. There are some empty fruit packaging halls there. I was about to pack my art and bring it to Argentina and hang it totally in the middle of nowhere so that my great-grandchildren would maybe have a chance to see what I did. I was not expecting to ever be back in the so-called important art world.”

So the museum show.

“Art is taken by most people not just for what it is but for where it is,” Meier says. “If you are in a so-called important museum they do not necessarily care for your work, but this they understand. So after this exhibition everybody was interested and people started collecting and museums are buying and so forth.”

Also he does actually have new art at Watermill. Drawings, small sculptures. “I don’t decide to go into a studio and make art,” he says. “I make it while I’m waiting for a telephone call. ” He calls the sequence Accidental Birth, the use of the word “accidental” being no accident. Well, it wouldn’t work for everybody but it seems to work for Dieter Meier. 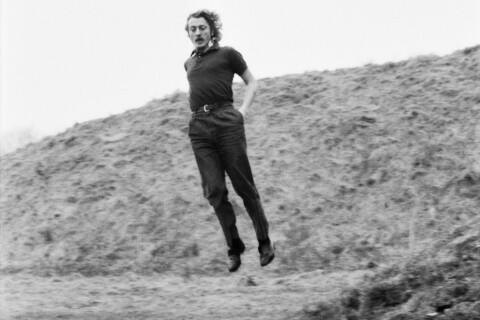 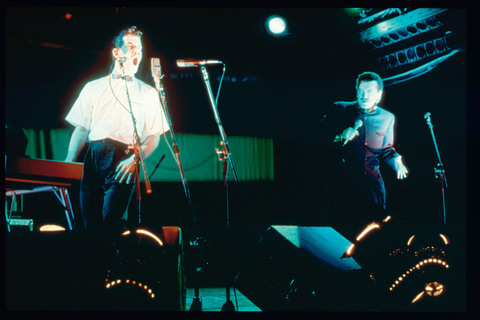 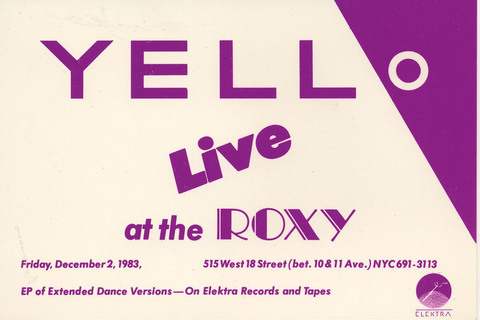