Los Angeles: a city 3.9 million people call home that’s woven together not by great public transportation, but by a vibrant and storied food culture. Since LA’s earliest days, its many cultural niches have acted as breeding grounds for huge global culinary trends. That Instagram you just saw of that açaí bowl? You can thank (or blame) LA. We’re paying reverence to the restaurants that have defined LA’s collective food consciousness and made waves around the world, some still standing and some lost to history. These 12 restaurants are deeply woven into Los Angeles’ identity and recognizable to any true Angeleno. Philippe The Original claims to be the originator of the French dip, that irresistibly sandwich featuring French bread dipped in a mixture of pan juices and stock. According to legend, one day in 1918 Philippe Mathieu was fixing a sandwich for a customer when he accidentally dropped the roll into the roasting pan filled with still-hot juice. The man returned with his friends the next day requesting the au jus-soaked creation, and the rest is LA history. Today, some folks go for the traditional beef dip, but veterans know to stick with the roast lamb leg sandwich topped with a big slab of Glenview Farms blue cheese. Be sure to slather your sandwich with Philippe’s signature sinus-clearing horseradish mustard.

Other restaurants that claim to be the originator of the French Dip: Cole’s in Downtown LA.
Grand Central Market (1917) 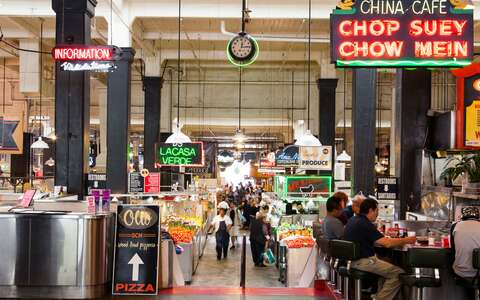 In 1917, a public market unlike any other in Los Angeles opened in downtown’s first fireproof, steel-reinforced structure. Fast forward a century, and the market still draws locals and tourists in droves with lox and pastrami from Wexler’s Deli, Instagram-worthy breakfast from Egg Slut, El Salvadorean papusas from Sarita’s, and addictive carnitas from Las Morelianas. What’s more, you can sit down at an oyster-shaped kiosk in the market and eat bivalves and sip French wines, and then immediately walk over to buy imported moles at the Chiles Secos stand and grass-fed beef from Belcampo. There are nearly as many Jews in LA as Jerusalem, and in America, wherever there’s a large Jewish population, you can bet there’s a deli dolling out pastrami on rye, rugelach, and matzoh ball soup. Located in the Fairfax District and originally opened in 1931, Canter’s is Los Angeles’ oldest, largest, and most camera-ready deli. True Angelenos know the spot is 24-hours, serves (off-menu) brisket-stuffed fried kreplach, and that it has an adjacent bar with live music called The Kibbitz Room. Fun fact: Rick James, Guns 'n' Roses, and the Red Hot Chili Peppers all held jam sessions in the storied cocktail lounge. Nancy Sekizawa, aka Atomic Nancy, at Atomic Café. She's the daughter of the owners Ito and Minoru Matoba, who opened the restaurant after being released from a Japanese internment camp. She was big in the punk scene, and still DJs today. Photo courtesy of Nancy Sekizawa.

Where did David Byrne, Sid Vicious, and Blondie go when they wanted Egg Foo Yung? The Atomic Café, a tiny late-night haunt in Little Tokyo frequented by rock stars and punk kids looking to play the Germs on the jukebox and order fried rice from the 45-record themed menus. In 1989, the Atomic Café shuttered and reopened under new ownership as Troy Café. In 2015, the building was demolished. The storied venue lives on in song lyrics, movies, and the memories of its loyal patrons. Los Angeles is the hamburger’s spiritual home. The city even lays claim to having invented the cheeseburger in the mid-1920s when a teenage short-order cook allegedly put cheese on a patty at The Rite Spot restaurant in Pasadena. The Pasadena lunch counter is now defunct, but you can find a classic L.A. burger—the unfussy kind with a big wad of iceberg lettuce, onion, pickles, Tillamook cheddar, and a slightly toasted bun—at The Apple Pan in West LA. The 1940s institution is best known for its Hickoryburger, a cheeseburger with a smoky ketchup-like sauce, as well as an exemplary banana cream pie and apple pie. Kendrick Lamar at Roscoe's House of Chicken and Waffles. Photo by Jeff Lombardo.

Founded in Long Beach in 1975, this LA soul food institution counts Snoop Dogg, Larry King, Natalie Cole, Thomas Keller, and President Obama as patrons. No one even questions the unlikely combination of golden fried chicken and large waffles covered in butter now that Roscoe’s and its chicken-and-waffle predecessor, Wells Supper Club in Harlem, made the dish a comfort-food staple. Hard to believe, but there was a time when calling your menu “farmer's market-driven” was a radical concept. Michael McCarty helped pioneer what came to be called “California cuisine” when he opened his indoor-outdoor restaurant Michael’s nearly 40 years ago in Santa Monica. Iconic LA chefs cut their teeth in McCarty’s kitchen, where they learn the powerful art of cooking the region’s best ingredients simply. You don’t talk about iconic celebrity hotspots—or the birth of “California cuisine,” for that matter—without mentioning Spago. In 1982, Austrian-born chef Wolfgang Puck opened the original Spago in West Hollywood. There, he served designer caviar- and smoked salmon-topped pizza to Jack Nicholson, Whoopi Goldberg, and Steve Martin (to name a few). Spago’s newest location is in the heart of Beverly Hills, and the menu’s still dictated by the best produce and products California has to offer. (Fun fact: Spago’s original pizza chef, Ed LaDou, developed the first menu for California Pizza Kitchen.) When Nobu Matushisa began seamlessly folding bright Peruvian flavors into Japanese dishes, he blew Los Angeles’ collective mind. Nobu is responsible for such now-ubiquitous dishes as black cod with miso and yellowtail sashimi with jalapeño, which he first served in the late ’80s at his star-studded Beverly Hills restaurant Matsuhisa, and now serves internationally with Nobu. It’s hard to have a more LA dining experience than nursing lychee Martinis and eating spicy rock shrimp tempura at Nobu’s oceanfront location in Malibu. A certain GOOP-style of eating has spread its way across Los Angeles (and the U.S.) in the last few decades. The café that started this $13 sprout sandwich, see-and-be-seen restaurant model is none other than Urth Caffe in Manhattan Beach. For better or for worse, the extraordinarily popular coffee shop now has seven locations in Southern California and even a shop in Tokyo’s chic Daikanyama neighborhood. Did Urth lead the way for Instagrammable coffee shops like Sqirl and Intelligentsia? We can’t say for sure, but we’ll go ahead and give it credit.

More restaurants where people go to see and be seen while pretending to care about the food (that have defined LA): The Ivy.
Mozzaplex (2007) Nancy Silverton is an Angeleno to be reckoned with. Her weekly grilled-cheese nights at Campanile were the epicenter of the ’90s food scene, and her adjacent temple of sourdough, La Brea Bakery, redefined bread for the city. While Campanile is long gone, Silverton now has a trifecta of rustic Italian spots in Hollywood—Osteria Mozza, Pizzeria Mozza, and Chi Spacca (affectionately referred to as Mozzaplex)—serving some of the city’s finest pasta, pizza and house-cured salumi. Outsiders often view LA as the land of juice fasts and cleanses, but in reality, it’s a city with Cambodian-run donut shops and late-night taco trucks on every corner. So it’s really not all that surprising that chefs Jon Shook and Vinny Dotolo opened their self-proclaimed “meat-eccentric” restaurant a decade ago. Here, the lauded dudes serve forty-six-ounce ribeyes, as well as Anson Mills rice with a Niman Ranch beef patty, quail egg, and thick slice of Spam, all drenched with house-made teriyaki sauce. A bit much? That’s sorta the point. Kogi BBQ founder Roy Choi put himself on the map when he launched a fleet of Korean-Mexican taco trucks in 2008. He tweeted out the truck locations so fans could hunt down his bulgogi tacos and kimchi quesadillas, which changed the restaurant game as we know it. Now Choi has restaurants across the city—POT in K-town, LocoL in Watts, and A-Frame in Culver City, to name a few. Thanks to Choi, food trucks in LA are now slinging some of the best, most inventive eats in LA and the country. The Standard Guide to Hollywood